The fourth quarter of this year has been widely viewed as a buyers’ market for the five volume commodity resin markets, whose prices are nearly all on the downslide. Key drivers include a global slowdown and lower prices abroad, a drop in prices of key feedstocks, and more than ample supply in many cases.

Meanwhile, demand for bales of recycled material is going through the roof—particularly for HDPE and PP, with consumer brands demanding more recycle-content products—a trend that will only grow faster. 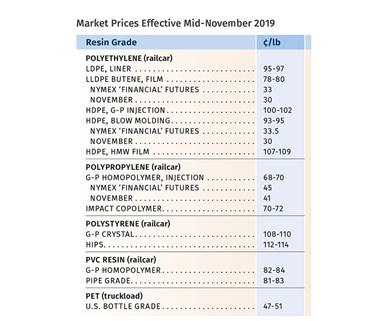 Those are the views of purchasing consultants from Resin Technology, Inc. (RTi), senior editors from PetroChemWire (PCW), and CEO Michael Greenberg of the Plastics Exchange.

Polyethylene prices were flat in October after the September 3¢/lb increase, but a change was afoot. The 3¢ hike was largely expected to evaporate by November’s end, according to Mike Burns, RTi’s v.p. of PE markets, PCW’s senior editor David Barry, and The Plastic Exchange’s Greenberg. They also predicted a further drop this month. Burns advised that processors delay purchasing, and Barry suggested that further price erosion, on the order of 3¢/lb, was possible before year’s end. 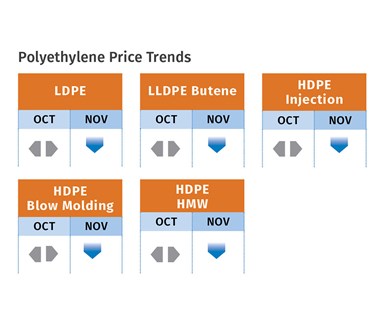 These sources say this buyers’ market ought to be helpful to processors in 2020 contract negotiations. They base this on weak global market demand, along with the impact of trade tariffs. According to Barry, this “new normal” with all the new PE capacity has pushed suppliers to move material out quickly. “There is more sustained high-volume export activity from North America than ever before to areas such as Southeast Asia, Europe and Africa, a trend that will need to continue as domestic demand for 2019 is likely to end in negative growth,” he noted. Barry cited American Chemistry Council numbers for the third quarter, which show sales of HDPE down by 5%, LDPE down 6%, and LLDPE up 1%—for a cumulative drop of 3%. In the first week of November, Greenberg reported that spot PE prices were lower in the face of lackluster domestic demand.

Polypropylene prices went up 1¢/lb in September in step with propylene monomer contracts and then followed October monomer contracts down 1.5¢/lb a month later. (Monomer settled at 37.5¢/lb.) However, both PCW’s Barry and Scott Newell, RTi’s v.p. of PP markets, reported that additional PP price cuts of 2-3¢, and as much as 5¢/lb, were being negotiated by some buyers in the fourth quarter. The Plastic Exchange’s Greenberg said spot PP availability was good. “Weaker feedstock costs are pointing to lower November PP resin contracts, and suppliers got ahead of the game by offering cheaper spot PP prices, down about 2¢, which spurred better buying.” 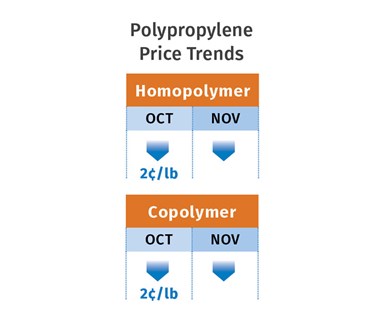 According to Newell, demand for PP has been disappointing all year, with supplier inventories in October at an all-time high of 39-40 days. He expected that processors’ inventories were also high as they felt the “headwinds of low demand” at the start of the second half of this year. “So I see suppliers needing to cut production rates. Both domestic and export sales were down, although exports are the one thing that has kept the PP market from going negative by end of the third quarter—it was actually up 1.1% overall.”

Polystyrene prices were flat in October, but the tide was fast changing as benzene prices dropped along with demand, according to both PCW’s Barry and Robin Chesshier, RTi’s v.p. of PE, PS and nylon 6 markets. These sources thought that November PS prices would drop 2-3¢/lb, with the potential for another 2¢/lb decline this month. 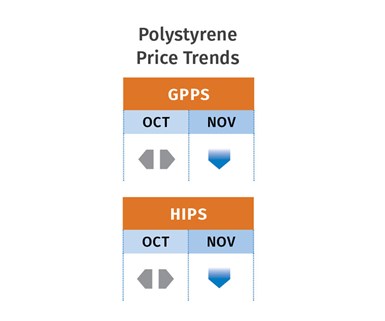 Both sources noted that October benzene contract prices held at the lowest level of the year, $2.60/gal; but spot benzene prices had dropped to as low as $2.10/gal, and nominations for November contracts were for $2.23-2.25/gal.  Barry reported that November spot PS prices were down 3¢/lb, driven by lower benzene costs and demand that was slow even by seasonal standards. He noted that by the end of the third quarter, PS demand was down 4%, year-to-date.

PVC PRICES FLAT TO DOWN

PVC resin prices held even in September and were likely to stay put in October too, despite suppliers’ 3¢/lb increase for that month, according to both Mark Kallman, RTi’s v.p. of PVC and engineering resins. and PCW senior editor Donna Todd. Suppliers attributed their price move to ethylene prices, which rose a total of 6.25¢/lb from July through October.

However, both sources noted that PVC prices did not drop in the spring when ethylene prices fell 10.25¢/lb. “They can’t have it both ways,” says Kallman. Ethylene prices were projected to be flat in November and sink lower in December. 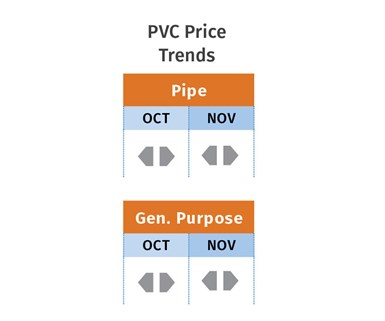 Kallman predicted that PVC prices would likely be flat to down by about 1¢/lb in November-December. He also said suppliers will need to be competitive in their 2020 contract negotiations with lower prices at the start of the new year. He projects that 2020 will be another challenging year for PVC, noting that total demand, domestic and exports, through the third quarter, was down by 3% (with domestic down 4%, and exports down 1%). Todd reported that pipe buyers would rather not see a price drop, as they have been struggling to push pipe prices up prior to the winter slow season, without much success. But, she added, “Converters in the other downstream markets definitely want to see PVC prices decline, and are telling their suppliers that if it doesn’t happen they will come after the reduction in contract negotiations as resets.”

PET prices ended October as a rollover in the 47-51¢/lb range. By early November, domestic PET resin buyers were bidding at the low-to-mid 40¢/lb range for pickup on the West Coast. Selling interest by distributors was firm at the high 40s-low-50¢/lb range, according to PCW senior editor Xavier Cronin. 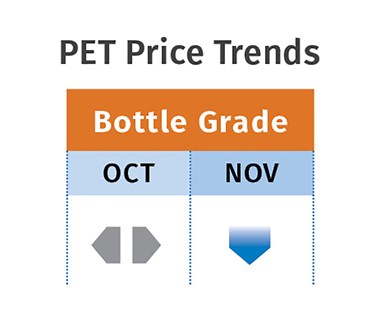 He reported that November was expected to remain a buyers’ market for PET, with plenty of penciled-down resin (normal-spec resin priced lower to liquidate surplus inventory) and offgrade PET due to bloated supply. As for this month, it was largely expected that PET prices would drop 2-5¢/lb due to the supply factor and the holiday demand slowdown. Cronin noted that there is plenty of resin available from domestic producers and their distributors; with plenty of imports available from around the world throughout the country—from the Eastern Seaboard to the Gulf Coast, Great Lakes locations, the Pacific Northeast and the Golden State.