Priority Plastics is thinking big—large, wide-mouth containers and drums, that is—to offer new concepts to the U.S. market. The company is launching lines of industrial and consumer packaging made on machinery said to offer capabilities not seen before in the U.S.
#polyolefins

How does a company whose business is primarily in stock blow molded containers create excitement in the market? For Priority Plastics, the answer today is to offer new choices to packers and brand owners that present opportunities for product differentiation, enhanced quality and cost savings.

Is the midst of a global pandemic the right time to explore new technology and expand production in new directions? That’s evidently not holding back Priority Plastics, which is just now introducing its second major product line in two years, while trying on a different type of manufacturing technology for the first time. Its first foray into PET injection stretch-blow molding (ISBM) has something in common with its introduction of new high-speed HDPE tight-head container production a year ago: Both are made possible by imported machine technology not seen previously in North America.

A key element of Priority Plastics’ business model is responsiveness to customer demands and minimizing freight costs through strategic plant locations across the country. The firm assumed its current form through the merger of three companies in 2006, one of which dated back to the pre-1900 era, when it made metal stirrups. The name Priority Plastics was adopted in 2008.

The firm today employs around 300 in four plants that house 35 to 40 extrusion blow machines plus a few ISBM systems that arrived in January and will start production in March. Overall revenues are around $70 million.

The headquarters location, in Portland, Ind., has 85,000 ft2 devoted largely to HDPE tight-head drums. Its in-house DOT-audited lab for drum testing to UN specs is said to be unique among plastic drum manufacturers. Another special capability is a portable Class 100,000 cleanroom for manufacturing high-purity products such as 20-liter chemical drums and three-chambered DNA sampling containers. Portland is also the location for the company’s two newest technologies in tight-head containers and PET ISBM.

The Grinnell, Iowa, plant (82,000 ft2) produces a variety of blow molded HDPE canisters and packages of dry-pack towel wipes. The lids are injection molded, previously done in-house but now outsourced. The company sells both filled packages and empty canisters and lids, all of which saw a sales boost from the COVID-19 pandemic. “They’ve really taken off—one our biggest growth engines this past year,” says Nate Zimmerman, director of business development.

This geographical dispersion of production facilities is supplemented by the firm’s Priority ONE program for placing machines at customers’ plants for onsite production. “Lower carbon footprint and less shipping of air,” explains Zimmerman.

Besides a stock container portfolio that extends to well over 300 SKUs, Priority Plastics offers a number of custom capabilities. Among these are lightweight versions of standard products, which are said to use 20% less resin without compromising product durability. Another option is Eco Multi-Layer versions of some products in which up to 80% of the core layer consists of regrind or post-consumer material, sandwiched between virgin layers. 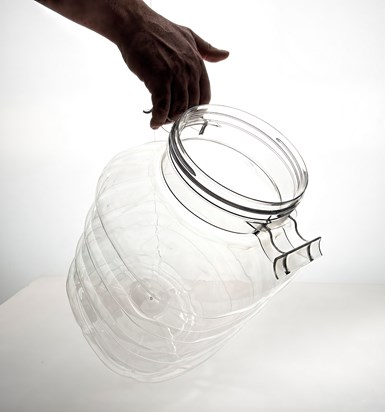 A different example of an integrated handle possible with Priority Plastics’ new ISBM technology. The handle is molded into the original preform.

Getting a Handle on New Tech

The newest development from Priority Plastics is expanding beyond extrusion blow into ISBM. Its first step into this technology involves bringing into this country for the first time, and on an exclusive basis, a few machines to its Portland plant for making wide-mouth PET food and beverage containers from 1-gal handleware up to 25-gal drums. Initial targets are containers for frozen alcoholic beverage pops and 88-oz retail containers. Another planned product is a 1-gal wide-mouth nutraceutical powder container.

Marketing director Stephanie Oliva says, “We are currently educating prospects and customers about these new and innovative sizes now available in the U.S. market. We believe these could be competitive to HDPE for certain industry segments.”

The company is looking at both larger and smaller containers for ISBM production. According to Zimmerman, open-head PET containers larger than 25 gal are being developed in The Netherlands. And Priority Plastics also has its eye on future production of smaller, narrow-neck PET containers via ISBM for hand sanitizer and personal-care products.

Priority Plastics declines to name the source of these single-stage ISBM machines or specify the exact number installed so far, but it cites several advantages that led to the choice of these systems over well-known competing brands. For example, Doug Gilbert, senior product development engineer for this technology, notes the capability to produce jugs with integrated handles, similar to extrusion blown jugs, but without any trim scrap. He explains that they are made from special PET preforms that are injection molded with the handle (multiple styles are possible, as shown in accompanying photos).

Other capabilities are stackable bottles, rectangles, and wider necks than are available with competing ISBM technologies.

On the processing side, Gilbert says these machines offer more cavitation than competing models, quick-change tooling (requiring a couple of hours), and up to 40% energy savings from recapturing high-pressure blowing air for use in extrusion blow processes. Energy is also saved by linear transfer of preforms from the injection station to the blowing station without reheating.

ISBM is not all that’s new at Priority Plastics. A year ago, the company went into production with the “Cyclone,” a four-cavity, continuous-extrusion shuttle machine of a type not seen in the U.S. before. It’s designed to produce 5-gal/20-liter HDPE tight-head containers. According to Gilbert, “Through a combination of cavitation and faster cycling, it has twice the output of any other machine in North America right now. It is capable of multi-layer production and lightweighting. Most important, it allows us to convert customers from UN open-head pails to something more cost-effective, that’s also UN-rated, and will not leak.” Gilbert notes that, as with the company’s new ISBM capabilities, the Cyclone requires customer education. “Open-head is a cheap solution—or so it seems at first blush. But add the Cyclone’s faster cycles to the fact that tight-head containers allow for more of them to be stacked on a pallet, saving on freight costs, and likewise saving warehouse space and cold-storage space for those products that need it, and it’s more economical overall. Equally important—or more so—it’s a better container for abrasive and corrosive chemicals that you don’t want to leak or spill.”

Priority Plastics has one Cyclone machine in Portland, but it hopes its customer education campaign will create demand for more. With all this new activity in Portland, the company is looking toward a 40,000-ft2 expansion in warehouse and manufacturing space.

Zimmerman notes that among the “new normal” conditions brought about by the COVID-19 pandemic is a trend toward greater automation at Priority Plastics. The new ISBM machines will have fully automatic packing lines, and the Cyclone recently was outfitted with automatic capping and packaging. In addition, the Iowa plant has three collaborative robots (cobots) in its packing stations.

Priority Plastics is also making increased use of remote access to its machine controls. “Three or four of our newer extrusion blow machines can connect remotely with the manufacturer’s service department—as can the new ISBM machines,” Gilbert notes. “And the Cyclone allows us to make program changes remotely.”