Canon runs a big recycling operation in Virginia where it collects and sorts toner cartridges, pelletizes the scrap, then molds new cartridges from the reclaim.
#sustainability #closeupontechnology

Through its in-house program, Canon is able to produce 100% recycled HIPS material.

Canon Inc. is well-known as a huge Japanese-headquartered, multinational maker of professional and consumer imaging equipment and information systems. But what might be less known is its position as a big-time player in recycling.

In 1996, Canon Environmental Technologies, Inc. (CETI) was built in Gloucester, Va., to support the firm’s cartridge-recycling program in North America, which was the first such program in that industry. Since then, CETI has received more than 500 million lb of toner cartridges from North and South America.

CETI carries out closed-loop recycling of the toner cartridges it collects, putting the materials that go into them back to use in molding new cartridges. Canon reprocesses primarily HIPS material, which is turned into new cartridges with 100% recycled content. HIPS is separated, purified and repelletized for use in the firm’s in-house injection molding operation as well as in overseas facilities.

Toner cartridge parts that are not reused are broken down and separated into other material streams. Any unusable waste material is recycled through an outside partner, as Canon follows a strict zero landfill policy.

Tom Keegan, Canon v.p. of engineering and engineering project leader, says that one of the key challenges of their recycling process is material separation. “We receive truckloads of material every day and we have to make sure the separation equipment we use is robust and reliable. The equipment requires consistent maintenance to avoid downtime.”

As noted by Wayne Daniel, director of business planning for  injection molding, incoming resin can have significant differences in composition: “The better you can separate in the beginning, the better product in the end. It’s a huge challenge from a technical point of view.”

Daniel says that one of the big things Canon has to consider on the injection molding side is the purity of the material so as to avoid contaminating the molding process. 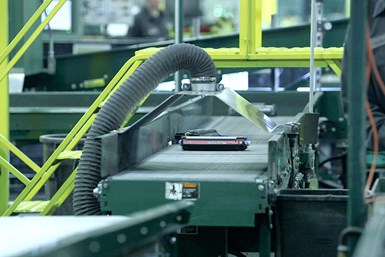 Canon’s all-in-one cartridges have components that can be recycled and reused by Canon.

Another critical consideration is the plastic viscosity variation. “When you’re blending material from different suppliers into one recycling stream, chances are the viscosity of material is going to be all over the place,” he explains.

So the company conducted numerous studies on material viscosity by using standard test methods. They utilized a spiral flow mold as well as melt-flow index testing on every lot to study viscosity variations. Overall the variation found was within their processing window so molding process changes were not required or minimal.

If needed, the material can be categorized by flow rate and introduced into the molding process under controlled conditions. “This way we know which material at which viscosity is coming in to help accommodate variation,” Daniel said.

“The better you can separate in the beginning—the better product in the end.”

“Overall, the processing parameters don't change too much—just how we approach the initial setup and processing window to allow for any variation,” Daniel notes.

Canon has set up a pilot process and a research lab with smaller-scale equipment that can take the returned product as it comes in and run it through a smaller-scale process, which helps deal with any issues in the lab, instead of immediately putting it through their production process.

“Being an end user, your essentially you’re own customer, and that gives you a feedback loop of data on molding side and sharing the data with the internal recycling team. That drives continuous improvement by leaps and bounds,” Daniel says.

Daniel adds that Canon also offers its services as a recycler to others. They have recycled material in their inventory to sell to outside suppliers, such as HIPS with or without flame retardant. The company also has reclaimed toner as part of the recycling process, which can be used as a colorant or a filler for other plastics.

For companies looking to get more involved in recycling, Canon’s Keegan recommends they make sure recyclability is included in the initial design, with a focus on the materials used and that there are cost-efficient means to sort and recycle them.

For the future,  Keegan says CETI is looking into chemical recycling processes. “We focus on mechanical recycling, but there are some materials we aren’t able to efficiently recycle in that manner. So we’re looking at companies that are making progress with chemical recycling. We would like to investigate and work with them to understand the process better, what kind of outputs there are, and if it’s a good economical investment for us.”