Prices of all five major commodity thermoplastics have been dropping throughout the second quarter. Despite strong demand for packaging and medical products, the impact of the coronavirus pandemic coupled with low crude-oil and other feedstock prices have significantly dampened demand for industrial and durable goods. Nearly all PE, PP, PS, PVC and PET suppliers have throttled back on resin production to adjust to weakened demand.

Polyethylene prices dropped 4¢/lb in April, as had been projected by Mike Burns, RTi’s v.p. of PE markets, PCW senior editor David Barry, and The Plastic Exchange’s Greenberg.  “A 4¢/lb contract-price decrease seems to be solid for April PE contracts and the battle for May begins—processors are calling for another 3-4¢ decrease,” reported Greenberg at the end of the first full week in May. He said export markets continued to be busy, though prices have fallen sharply to compete with lower international resin prices, fed by falling crude-oil-based monomer costs. “The global polyethylene market is still trying to find a bottom,” he concluded. 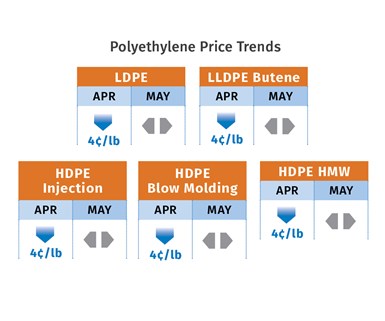 RTi’s Burns characterized the status of the North American PE market in early May this way: With the drastic decline in oil prices, the U.S. has lost its feedstock cost advantage over the rest of the world. “We are now producing PE at a cost equal to everyone else. Plus, we have an extra 40% capacity, which typically has gone to exports. In addition there is a limited number of railcars available.” He says North American suppliers will have to cut production and/or sell export material at a loss. He ventured that if oil prices remain low, leading to lower production, natural gas prices will increase and contribute to higher ethane costs. Such an increase will further erode the North American cost advantage for export and could lead to decreases in PE production, keeping prices in North America firm heading into the hurricane season.

PCW’s Barry noted that PE suppliers had positioned themselves for weaker second-quarter demand by cutting back production. Dow, for example, announced it would idle three PE plants and two elastomer units (accounting for about 10% of Dow’s global PE and elastomer capacity) for at least one month to match demand trends in the U.S., Europe and Latin America. LyondellBasell executives said the company's U.S. olefins and polyolefins assets were expected to run at approximately 75%. The company has not seen demand decline to the point where it would consider idling PE plants. ExxonMobil said it was slowing the pace of its plant construction projects.

Barry noted that PE spot prices were mostly unchanged in the first full week of May. He saw potential for another 2-3¢/lb drop, noting the 10-13¢/lb spread between wide-spec and prime PE, as well as a drop in exports. Greenberg said, “Processors have been shrewd, only ordering small quantities, expecting lower prices ahead, and in most cases being very aggressive with low-priced bids.”

Polypropylene prices dropped 1¢/lb in April, following the 4¢ drop in March, in step with April propylene monomer contracts. Both Scott Newell, RTi’s v.p. of PP markets and PCW’s Barry figured that prices were near bottom as monomer supplies tightened because refinery operating rates had dropped below 67%.  Both expected PP prices to follow monomer tabs in May.  Newell foresaw flat to slightly higher pricing. Barry expected monomer and PP prices to start moving up in May to June, with PP suppliers throttling back on production. “There was talk that some producers had reduced throughput to around 75% of capacity,” he reported.

Newell characterized PP demand as “average” in March and most of April, noting that despite the steep drop from automotive, other markest such as nonwovens, food packaging and consumer products were strong. Nonetheless, by the end of April, a slowdown appeared to be taking place, he said, with resin-order cancellations being reported. Medical products were noted as one bright spot in the market, while automotive resin demand, which nearly halted in April, was expected to make a slow recovery. 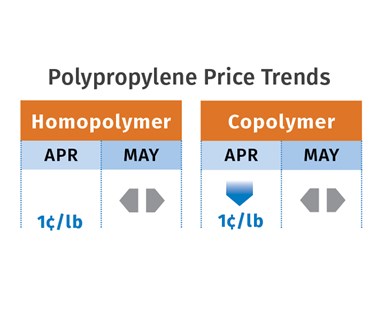 Both Barry and Greenberg saw spot buying activity slow down, though supply was ample. Greenberg reported that his PP homopolymer sales outpaced copolymer. “Also, prime was favored over widespec, as the contract decrease has helped narrow the spread. The market awaits a normalization of demand which could begin to develop as shelter-in-place orders begin to ease.”

Polystyrene prices dropped 9¢/lb in April, following one of the largest drops historically in benzene contract prices, down to $1.30/gal from March’s $2.57/gal, according to PCW’s Barry and Robin Chesshier, RTi’s  v.p. of PE, PS and nylon 6 markets. Spot benzene prices dropped to as low as 79¢/gal, before moving up 10¢/gal by the end of the first week in May, and June was projected to rise to 95¢-$1.05/gal, according to Barry. He also reported that spot prices for prime PS had dropped 3¢/lb, due to weaker-than-usual demand. May contracts would likely follow suit. 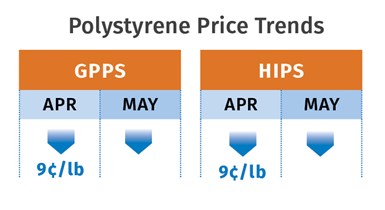 “Disposable food-service items were expected to get a lift in the summer as consumers, weary of coronavirus lockdown measures, escaped to the outdoors. So far, this anticipated demand trend has not boosted PS consumption enough to offset the overall weak economic outlook,” reported Barry. Both sources noted that PS suppliers would continue to reduce their operating rate based on demand forecasts. RTi’s Chesshier said she did not expect this year’s seasonal demand to equal that of past years. There were indications that orders from big-box stores were down 30%. She predicted that suppliers would aim to keep prices steady this month. “This situation is creating a new way of looking at things—processors are getting more creative,” she said. There are strong indications that some PS processors have already started qualifying other, more attractively priced, resins—PET, PP or HDPE—particularly for rigid parts such as appliance components.

PVC prices in April were expected to drop 4-5¢/lb, wiping out the 5¢/lb gained by suppliers in the first two months of the year.  Another drop in May of about 3¢/lb was likely, according to Mark Kallman, RTi’s v.p. of PVC and engineering resins, and PCW senior editor Donna Todd. Demand in the major construction sector was down by as much as 30% going into April, and May was expected to be worse. Said Kallman. “I think we’ll see some start of recovery in June, but real recovery won’t be seen until third quarter.” He saw medical e-commerce and retail sectors for PVC as doing relatively well. 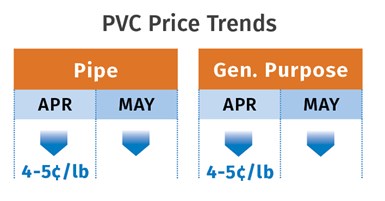 PCW’s Todd characterized the PVC market as still in defensive mode at the end of the first full week of May, with suppliers and processors navigating through the uncertainty brought on by COVID-19. “The normal spring demand season has been delayed more in some places than others due to the differences in the shelter-in-place orders enacted by the various states. As of this week, most states were opening their economies back up to some extent, though each was taking its own approach to returning to a ‘new normal’,” said Todd. Both sources reported that suppliers were aiming to keep their inventories in check via maintenance turnarounds or throttling back production. Plant operating rates were said to be below 80%, with some suppliers at 60% to 75%.

PET prices started May in the low 40¢/lb range for domestically produced resin in railcars and truckloads (delivered), down from the mid-40¢/lb range in early April. PCW senior editor Xavier Cronin thought prices would drop as much as 5¢/lb by June, due to the collapse of crude-oil prices and the resulting drop in tabs for paraxylene and other PET feedstocks. He said, “Supply for end users is readily available for spot and contract deliveries, from U.S. production/storage locations and imported PET from around the world. At the same time, demand for PET is rising in the consumer sector as demand for bottled water and other carbonated beverages continues to rise due to the COVID-19 outbreak.” 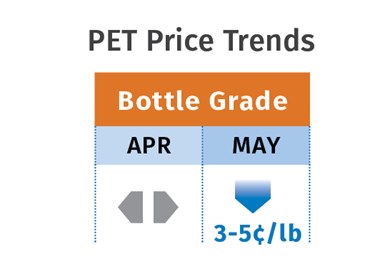 Meanwhile, Cronin reported that demand for food-grade rPET is strong. Spot and contract business in earl May was steady from April in the high 60¢/lb range for truckload delivered. This demand is driven mainly by consumer brand companies under pressure to blend more recycled plastic into their bottles, containers and packaging.