The plastics processing market first heard rumblings of terms like Industry 4.0, the Industrial Internet of Things (IIoT), Big Data and the Connected Factory about five to six years ago. For many in plastics, the coming-out party for these concepts was the K 2016 show in Düsseldorf, Germany, where suppliers—mostly of injection molding machines—touted the benefits of “big data” and the value of interconnected equipment. Since then, the technology has advanced into virtually all other processes and equipment types. Nowadays, whether it’s extrusion lines or discrete equipment such as dryers, blenders and conveying systems, suppliers are quick to point out the devices’ Industry 4.0 functionality.

Most industry watchers will tell you that while the North American plastics processing market has carefully scrutinized this technology, not many have made the plunge, especially compared with their counterparts in Europe and Asia. Over the years Plastics Technology has endeavored to find out why. The responses we’ve heard from processors range from, “How does all this data help make me money?” to “If Industry 4.0 means I have to buy all-new equipment, I’ll sit on the sidelines for a bit.”

But at least one compounder, Alterra Holdings (alterraholdings.com), headquartered in Clifton, N.J., has figured things out. About two years ago, it embarked on a plan to build its own Industry 4.0 platform at its 120,000 ft2 production plant in Seymour, Ind. It ramped up those plans about a year ago—when the global pandemic threatened any business that needed people to operate—and is at the point now where it is commercializing its IIoT solution to others in manufacturing—plastics and otherwise.

Alterra bills itself as the “fastest-growing” compounder in North America. It is headed by CEO Arash Kiani, who started his career in compounding in 1985 when, as a graduate student, he went to work for Werner & Pfleiderer (now Coperion Corp.), a builder of twin-screw compounding extruders. Kiani ultimately rose to the machine builder’s global head of R&D before leaving in 1999 to found Compounding Engineering Solutions (CES), which specialized in compounding engineering thermoplastics, notably nylon, ABS, PC and acrylic. By 2007, CES monthly sales were roughly $200,000 and Kiani launched a sister company, Harmony Elastomers, growing that business to the point where it is now the second largest producer of crosslinked butyl rubber, under the tradename NexGen, used mainly for sound-damping and construction applications.

In 2016, private investment firm Beaconhouse Capital Management LLC bought into Kiani’s businesses, and also acquired PLA supplier Trelles, which 10 years prior had purchased Cereplast. In 2018, Beaconhouse acquired Polymerixx, a compounder of CaCo3-filled PP, and in 2019 bought the intellectual property of Thrive (cellulose-filled compounds) from International Paper. It consolidated those business units under the Alterra umbrella and moved all manufacturing to the Indiana facility, where Trelles had been operating.

In the Indiana plant, Alterra has six production lines ranging in size from 58 to 103 mm. Five were purchased from Coperion; the sixth from Entek. Alterra also runs a 125-mm kneader as well as three Coperion lines devoted to R&D. The company has a nominal capacity of 200 million lb/yr and runs on a 24/ 5 schedule. 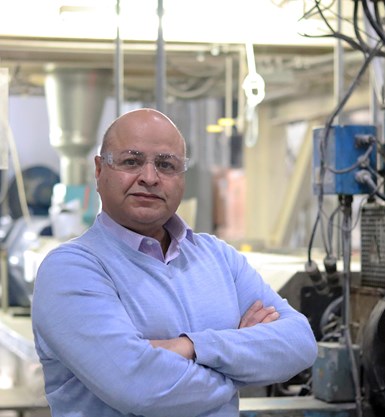 Alterra CEO Arash Kiani says the compounder moved to the SmartChronos Industry 4.0 platform to ensure its products were made in a world-class manufacturing environment.

“Our expertise is in elastomers, R&D, new product development and bioplastics,” remarks Kiani. “We can say with confidence that we are the fastest-growing compounder in North America by virtue of the fact that we’ve been doubling our sales every year for the past five. We even grew during the pandemic.”

An unspecified percentage of Alterra’s business in in tolling, a business that Kiani has played a major role in cultivating as a result of his 35 years in the industry.

“Tolling for major resin producers goes a long way to paying for the operational efficiencies of the plant,” Kiani explains. “We developed these relationships when we started CES. Back then, the ‘majors’ would come to us for the R&D phase, then take the tolling to another compounder. Now, we have the capacity to take these projects all the way through manufacturing. And these are generally high-volume, multi-year projects. We don’t fill in because the resin company has run out of capacity. Rather, they come to us because they trust us. And some of these tolling projects are very specialized. For example, we compound the material that is used as the skin for one of the world’s largest manufacturers of golf balls.”

“Tolling for major resin producers goes a long way to paying for the operational efficiencies of the plant.”

Alterra complements the tolling business with a suite of its own product offerings. It has developed multiple formulations for straws that are marine degradable. It has launched an EVA-based crosslinkable, foamable compound used to make soles for U.S. footwear manufacturers. It is partnering with an undisclosed Asian resin producer to commercialize film-grade bioplastic compounds to replace PE for shopping bags. Along with CheilJedang Corp. of Korea, which bought Metabolix’s PHA business in 2016, CES has worked on new grades of the biopolymer that it will compound for U.S.-based customers.

“We think the future is in biodegradable and sustainable products, and we are expanding our efforts in that area,” Kiani states. “We source post-consumer reclaim on a worldwide basis, primarily PP. We blend this reclaim with our TPEs and TPVs to offer sustainable solutions to companies in the consumer-products area. An example of this is razors. Generally, in that business the handle is made of PP, with the soft-touch overmolded of TPE. Our intention is to provide material for both the handle, which could be 100% PCR PP, and the soft-touch, which could have up to 20% PCR.

Thrive is the tradename of another of Alterra’s sustainable products The Thrive series of cellulose-filled PP compounds are reportedly being trialed now by Tier 1 suppliers to the automotive industry as an option to glass-filled PP for car components such as center consoles and air boxes. Compared with typically used resins for these applications, Kiani says Thrive boasts a 40% cycle-time reduction in molding while providing the opportunity for lightweighting.

Alterra, in the words of Kiani, is “hyper-focused on data.” But not for collecting data for the sake of some trend, but to use it as a means to reach “our goal to be the best-in-class manufacturer of every product we make. I want to make sure everything I produce is in spec. If there is something wrong, I want immediate and automatic notification so someone can react immediately.” 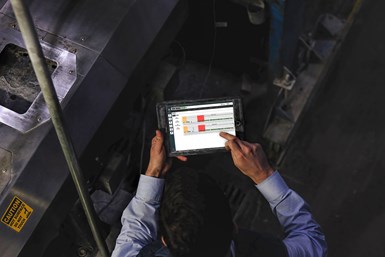 Alterra operators are equipped with tablets to help them track process parameters and be notified immediately if anything is off-spec.

To that end, Alterra embarked on a multi-million-dollar project two years to fully connect the Indiana factory: “every single machine, every single operator, every single quality-control person, and all their supervisors.” Alterra put this project in overdrive about a year ago, when the coronavirus pandemic threated to shutter factories and force shop-floor workers to stay home.

Alterra is using what’s been named the SmartChronos platform, aptly named since the Greek word chronos translates to chronicle in English. The system relies on a network of sensors on each machine that track parameters in real time such as feeder rate, barrel temperatures, torque, and much more, alerting the QC and production teams the instant a parameter falls out of spec, so they in turn can text the operator to take a look at what’s going on.

“If there is something wrong, I want immediate and automatic notification so someone can react immediately.”

Kiani elaborates, “There is a sweet spot for each product, in terms of barrel-temperature settings, torque range, feed-rate range, etc. And they are all product dependent. Most IoT platforms consider these parameters as ‘fixed in place,’ so we created a product-dependent platform that allows live feedback between QC and the operator on the line. As soon as something is out of range, the operators will be notified by a Slack SMS text to react to it immediately. Settings are color-coded in easy-to-understand green, yellow and red. “The idea is to keep things in the green zone,” says Kiani. All of Alterra’s operators are armed with tablets.

“And when we start a job, we define a machine we want to use, add sensors to it, identify the product, the grade, and look at the historical result. Based on that we establish our process settings: feed-rate ranges, barrel-temperature ranges, QC tolerances. This comes our ‘bible.’ On their tablets the operators have checklists that have to be run through before starting the run. These checklists are also live. The supervisor looks at the checklist and signs off. We have a checklist of every aspect of a run. At so many other companies, the production manager comes in first thing in the morning and might want to know if the third shift cleaned out the feeders before the run. Often, the answer he might get from the first-shift operator is, ‘I don’t know.’ Not anymore.

Schematic illustrates the extent to which Alterra’s SmartChronos Industry 4.0 platform connects the compounding line with managers in production, quality control, administration and more.

The platform does not require operators to enter run data by hand anymore, but Kiani requires them to do so every hour or so “to be engaged.” Otherwise, he notes, “They do no data collection.” And at the press of a button, Kiani says this data can be downloaded into an Excel or Google spreadsheet.

The system also permits Alterra to go back in time to do “deep dives” on every box of material the compounder produces. “Maybe we need to do a deep dive on Product X that’s in Box Number 63. We have at our fingertips all the processing details on how each box was made. We can access average readings for every parameter. And importantly, we have open data transparency. Customers have live access to our process data. Direct access to QC. If their end-use customer has a problem with Box Number 63 they can log in, see the line running their product, see if there were feeding or temperature variations. That way, the customer knows what they are getting is the best product they can get.”

“We have open data transparency. Customers have live access to our process data.”

Over the past several months Alterra has added new modules to SmartChronos. Now, cameras are connected to each production line. Videos of production runs are stored in the cloud for 14 days. If something were to happen—say the machine went down—the program captures a 10-min clip before and after shutdown so managers can see what happened and ensure that safety standards were maintained.

“Most IIoT platforms are built around dumb sensors,” Kiani states. “What we have here has been described by Tony, a long-time associate of mine, as a ‘product-by-process’ that gives us a significant competitive edge in the market.”