Cooling the Feed Throat and Screw: How Much Water Do You Need?

It’s one of the biggest quandaries in extrusion, as there is little or nothing published to give operators some guidance. So let’s try to shed some light on this trial-and-error process.
#bestpractices

One of the things that is often misunderstood on an extruder is water cooling of the feed throat and screw. Many operators do not understand the delicate balance of frictional forces in the extruder and how seemingly minor changes in coolant flow can affect performance. Many operators think they are simply helping to reduce the melt temperature with more (or colder) water. So if a little cooling water is good, a lot is probably better, right? Nothing could be farther from the truth. 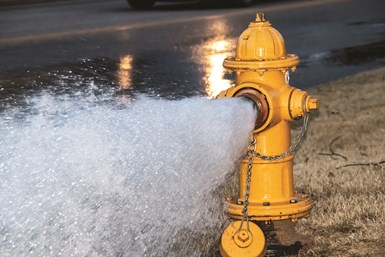 With almost no exception, increasing the temperature of the feed throat increases the frictional drag of the polymer on the wall by increasing the polymer contact area. If this seems counter to your current practice, it’s important to keep in mind that injection molding machines feed well and don’t even have a feed throat or provide an option to cool the screw. Equally interesting is that extruders without a separate feed throat—those with a feed port directly into the barrel—often have 20-30% greater rate than extruders having a separate feed throat and using identical screws.

It seems reasonable to conclude that setting a feed-throat temperature as high as possible would result in the best feed rate. In that scenario when you stop the screw, the polymer could melt in the feed throat as heat feeds back from the barrel, since it’s all highly conductive steel. Bottom line: To develop the highest possible feed rate and not melt material in the feed throat, the optimum temperature of the feed throat is determined largely by trial and error. No published temperature level is available, even for specific polymers, because of the many variations in feed-throat geometry and design—not to mention the many pellet sizes and geometries. With the hundreds of published barrel-temperature profiles, none show any suggested feed-throat temperature, so operators have literally zero guidance.

And then there is regrind, which muddies matters, as feed of this material may be optimized at a slightly different temperature. Fortunately, smooth-bore extruders generally have more than twice the contact area with the polymer on the barrel than on the screw in the solids-feeding area. So except for polymers with very low melting or softening points, it’s usually not much of a problem using heat to get more friction against the barrel than the screw to allow the polymer to move down the screw without any screw cooling. Most extrusion screws are produced with a hollow bore as an available option, but rarely is screw cooling necessary.

It’s good practice to start by setting the external surface of the feed throat adjacent the feed opening to be quite warm to the touch, about 125-130 F as the initial condition. Since very few extruders come equipped with a temperature indicator for the feed throat, it’s a touch-and-feel adjustment to determine the best temperature unless you have a contact pyrometer. A temperature of 130 F will be uncomfortable for someone to hold for more than a few seconds.

To find the optimum feed-throat temperature, gradually increase the temperature in small increments by regulating the water flow until no improvement in output or stability is evident, then back off to the prior setting. You really don’t have to be too concerned about some minor melting in the feed-throat wall, as the flight rotation will quickly remove it, just as it will in the next flight immediately after the feed throat. Because it is directly coupled to a barrel heated to a temperature well above the melting point, the feed throat naturally has a temperature gradient increasing from the feed opening to the barrel flange.

In many cases, the discharge end of the feed throat is near or even above the polymer’s melting or softening point, even with water cooling. Moderation is the key to finding the best temperature, and it may take several days of “tweaking” to find the ideal temperature. For example, when running PEEK, a very high-melting-point polymer, a feed-throat temperature of approximately 200 F provides the best output and stability. For PE it’s usually near 130 F.

The screw contributes best to optimum feeding at conditions opposite to those for the feed throat. The solids need to slide as freely as possible on the screw to maximize the solids feed rate and stability. Almost all polymers have decreased friction to steel as the temperature is reduced, so it seems logical to apply internal water cooling to the screw at least through the feed section.

However, there are some downsides to consider before adding coolant to the screw (unless it’s needed). Cooling the screw adds to the power requirement, extends the length of melting and builds in thermal variations. Even more damaging, if the cooling water is left on at shutdown, a layer of hardened polymer will be formed on the root of the screw that requires additional heat-up time, greatly reduces purging effectiveness, and can even allow condensation to form on the screw, causing rusting when shut down. Many screws are bored nearly full length, multiplying these effects over a greater distance. Only a few polymers that degrade very quickly at processing temperature, such as rigid PVC, need full-length bores, and even then with special piping so only the screw tip is actually cooled. As noted, screw cooling is seldom necessary because of the large differential between the feed-throat and screw surface areas and the cooling effect of the cold polymer in contact with the screw.

There are no temperature controllers on the feed throat and screw, but that does not mean that they do not require accurate control for optimum operation. Although this may seem like a needless complication, it only has to be done once for a given polymer and has been shown to increase output by as much as 30% (but more commonly by 5-10%)

Jim Frankland is a mechanical engineer who has been involved in all types of extrusion processing for more than 40 years. He is now president of Frankland Plastics Consulting, LLC. Contact jim.frankland@comcast.net or (724) 651-9196.