Fig. 1—Typical weld process graph illustrates force, power, and joining velocity. The diagram to the right shows the progression of the weld as the energy director (blue) is forced against the mating part (red).

Fig. 2—A computerized printout documents all welding parameters. Reference graphs of an established “ideal” process can be compared with graphs of actual cycles for analyzing production runs.

Ultrasonic plastic welding uses acoustics (mechanical sound waves) to create frictional heat, producing a molecular bond between plastic materials. The essence of process control for ultrasonic welding is to introduce me chanical vibrations into the plastic parts utilizing a specific amplitude, force, and duration. Research has pro ven that the consistency of the melting rate has a direct influence on bond strength. The more linear the joining velocity profile, the steadier the melting rate, the more homogeneous the molecular structure of the melt, and the stronger the weld.

Graphical analysis of joining velocity, welding power, and force has emerged as a highly effective tool to fix a range of problems, including inconsistent welds, poor weld strength, and non-hermetic seals. It also helps detect a number of equipment-related maintenance issues involving the acoustic stack, power supply, and pneumatic system. 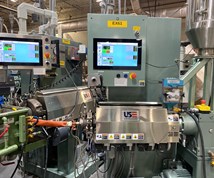 How the Coronavirus Transformed Training

How to read the curves

Computer-controlled ultrasonic welding equipment today offers visualization of the welding process with a weld graph. This is a great tool for understanding and optimizing the welding process. Figure 1 is a typical weld process graph showing force, power, and joining velocity. The diagram to the right of the graph shows the progression of the weld as the energy director (blue) is forced against the mating part (red). Frictional heat generated by vibration and pressure initiate melting at the apex of the energy director and the contact point on the mating part. Melt flow continues until the weld surface is bonded together homogeneously. A decrease in velocity and the flattening of the joining-velocity profile curve as the two parts come together indicates that the weld can be terminated at this point.

Frictional heating is controlled by the amplitude of vibration of the welding horn and the forces applied to the part during the weld. The greater the amplitude and force, the greater the frictional heating in the plastic. The joining velocity profile will depend on the plastic material (amor phous or semi-crystalline), the weld area or joint design, and the overall size and shape of the part assembly.

The power profile curve gives a visual record of the power needed to maintain constant amplitude throughout the weld—analogous to a graph of the horsepower required in a car engine to maintain acceleration and constant speed. This information is recorded at millisecond intervals. A sharp peak in power, excessive power draw in relation to maximum generator power, or erratic power draw over the weld cycle negatively influences the strength, reliability, and repeatability of the weld. Since higher amplitude and/or force demand higher power levels—and vice versa—the power curve can tell whether the welding system is being under- or overloaded.

Engineers can now “visualize-to-optimize” their welding process by using these real-time weld graphs. Once optimized, a “fingerprint” of the weld can be recorded and stored to document a specific assembly process. All critical data such as depth RPN (actual weld depth), weld time, weld energy, peak power, trigger position, and end-of-weld position can be reviewed to establish process repeatability and control limits. These process limits can alert the operator or manufacturing engineer when the desired weld quality is not achieved.

Once an optimized welding process is established, the weld process data and graphs can be stored as a reference (see Fig. 2). All subsequent weld cycles are then compared with the reference. As a troubleshooting tool, this information is invaluable in analyzing problems.

Some computer-controlled welding systems today offer force calibration, down-speed calibration, linear encoder (travel) calibration, and amplitude calibration. This makes it easy to determine if a problem is related to the ultrasonic welder or the plastic part.

Differences in the force-profile graph would alert the engineer to verify that the welder’s pneumatic system is working properly. Load cells with force gauges can be used to verify and calibrate welding force.

Down-speed calibration will verify whether there is any external influence on velocity from the pneumatic system or mechanical slide. Valves, air cylinders, regulators, and slide friction may influence the joining velocity and will cause inconsistencies in the welding process.

Differences in the power profile would indicate that greater or less power is required at certain points during the welding cycle.

The most meaningful weld process graph is the joining-velocity profile. This is a true indication of the actual melt flow as the parts are joined. Abrupt increases in slope may indicate that the joint material has been pushed out of the way and the parts are unintentionally sliding by one another (cold forming). This would also show up as a decrease in power as the damping of the horn vibrations is decreased and power output lessens. Improperly supported sidewalls in mash or shear joints are the most common example.

A decrease in slope means that velocity is decreasing due to the process having used up all the joint detail. Further energy is being used to melt areas outside of the intended joint area. This would lead to stress-cracking and part marking or scuffing from the horn. A decrease in velocity accompanied by a “spike” in power may indicate that power output of the generator may not be sufficient for the intended weld.

Since power demand from the generator is directly proportional to welding force and amplitude, the process engineer can verify and calibrate force and amplitude using a photonic sensor or a laser measurement system to record the actual amplitude at the face of the horn. If the targeted amplitude cannot be reached, there may be issues with the acoustic stack (converter, booster, weld horn). These items can be exchanged individually to determine the problem area or they can be tested to determine the root cause. Most ultrasonic manufactures will perform this evaluation free of charge.

To find the source of problems with weld quality and consistency, one should also examine the plastic parts themselves: Are there variations in dimensional tolerances, molded-in stress, material degradation, warpage, and sinks? Look for cavity-to-cavity variations in tightness of fit of mating parts as well as the fit of the parts to the tooling (horn and nest). Other considerations include presence of mold release or other contamination in the joint area, and possible changes in the plastic material due to changes in vendor or regrind level.

Bill Lynch is a key account manager for Herrmann Ultrasonics Inc. in Schaumburg, Ill. He has more than 30 years of experience in application engineering, service, marketing, and sales of ultrasonic equipment. He can be contacted at (847) 985-2226 or by e-mail at Bill.Lynch@HerrmannUltrasonics.com.