How to Deal With Residual Stress in Molded Parts

Here are design, molding, and fixturing considerations to help you handle this unavoidable issue.
#bestpractices

I often start my articles noting the large number of variables involved in injection molding. And I do appreciate feedback from readers, so my thanks to Rick White of Thermal Tech Equipment in Kansas City for pointing out one variable that I have completely ignored: the residual stresses in injection molded parts.

This is an issue in all injection molded parts and the fact is, we cannot mold even the simplest plastic part without some residual stress. This residual stress should be evaluated during design, molding, fixturing and part performance. Residual stress can be significant and often shows up as part failures after the part has been shipped, assembled and in use for a while. How and why is this?

The answer is straightforward. A part fails when the sum of the internal or residual stress and the external stress exceeds the strength of the plastic. We will start with an easy-to-mold part, a test specimen for DTUL (heat-distortion) testing

The common DTUL test bar is 5 in. long × 0.5 in. wide × 0.125, 0.25 or 0.5 in. thick. The test sample is shown in Fig. 1. Note that the thickness of the test sample can vary and it can be made by injection or compression molding. Also, you have the option of testing it as-molded or annealed. Annealed means the part was warmed to a temperature that allows most of the molded-in stress to be relieved. The point is that this an easy part to injection mold, yet when tested under ASTM 256 test conditions there is a significant difference between an as-molded part (unannealed) and an annealed or nearly stress-free part.

The data shows a 40° F (22° C) difference between unannealed and annealed for an injection molded part, and 39° F (21° C) for the unannealed vs. annealed compression molded specimen at the specified thicknesses (Fig. 2). Clearly, there is residual stress in this relatively simple, uniform-thickness part.

Note: I am not in any way justifying the ASTM DTUL test. My fellow Plastics Technology Know-How columnist Mike Sepe has written several articles detailing the flaws of this test and I agree tha it provides little, if any, practical information. I am using it only as an example of a relatively simple part that is easy to injection mold and yet it has significant residual stress. 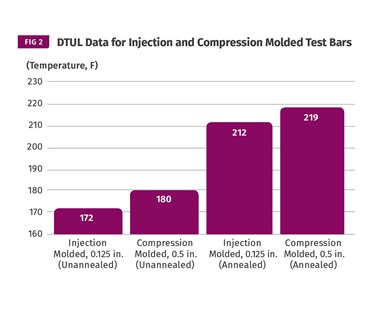 Let us move on to more typical injection molded parts that have significant changes in nominal wall thickness and often include complex geometries. When these parts are injection molded, far more internal residual stresses are developed. Why?

Here are some factors that cause residual stress in plastic parts:

1.  Thermoplastics are long-chain molecules. Their resting or stress-free state is a coiled chain something like a slinky. When pulled (stressed) the slinky straightens out, but you can feel the “residual” forces that are trying to return it to its resting coil shape. The stretching out of the coil is something like what happens to plastic molecular chains when flowing under the shear stresses of injection molding.

2.  During filling of a part, we are forcing the uncoiling of the polymer chains; and depending on nominal wall thickness, they may or may not have time to re-coil. In thin-walled parts, most are frozen in the stretched-out or stressed state. In thicker parts, the polymer chains have more time to re-coil before solidifying. and there is less residual stress. It gets even more complex, because cooling is not uniform throughout the wall thickness. The surface of the part cools quickly because it is up against the relatively cool steel. Below the part surface, the plastic is somewhat insulated by the outer skin, as plastic is a poor conductor of heat. Therefore, the polymer chains in the middle of the part have more opportunity to re-coil themselves and have less residual stress, than the polymer near the surface of the part.

5.  Once a part is ejected from the mold, there is nothing to constrain non-uniform shrinkage, so some parts warp or bend out of shape as they cool. So, some molders like to fixture the parts to hold them in the desired position until cooled. The problem is that they develop even more residual stress when fixtured. You are really inviting “Murphy” to the party at your expense.

6.  Pack-and-hold time causes gates to freeze or not freeze. Polymer molecules are something like humans. We have a social distance that we are comfortable with. For example, when talking with another person it can get uncomfortable if they are too close or too far away. Molecules are similar; they do not like to be too compressed or close together or too far apart. The gate area of most parts is often a highly stressed area due this packing or unpacking caused by the shear forces of injection.

7.  Thin sections or a part cool faster and shrink differently than thick sections. Tie them together in the same part and you get high internal stresses. The part may deform over time.

8.  Ejection not done properly can cause residual stress. Breaking the part away from the mold needs to be done evenly across the part with no sticking, binding or distortion.

Due to these and other issues not discussed here, it is wise to ask of the part, “Can it handle the stress?” This needs to be done before production and initial sampling. How?

This is relatively simple and should be done for all molding programs. You will learn a lot about residual stress if you thermally cycle your parts after molding. That is, put them in an oven and see what happens at around 230 F (110 C) then cool them down to -40 F (-40 C). And repeat. A bit time-consuming but better to learn about problems before production rather than after the part is in the field.

Bottom line, just because the part seems OK as it comes out of the press, it may not function properly in the long term. Parts continue to shrink and move over time. For those of you fixturing parts to force them to hold the desired shape, beware. You are trying to beat “Mother Nature,” and few people win that game.

John Bozzelli is the founder of Injection Molding Solutions (Scientific Molding) in Midland, Mich., a provider of training and consulting services to injection molders, including LIMS, and other specialties. Contact john@scientificmolding.com; scientificmolding.com.