Lower or Flat Prices Ahead

The year’s last quarter started with signals that prices of PE, PP, PS, PVC, and possibly PET would drop or remain flat, despite suppliers’ attempts to hike prices. Among the main drivers are ample supplies, falling global prices and, in some cases, slack demand. PET could be the exception, as higher prices are projected for its key feedstocks.

These are the views of purchasing consultants from Resin Technology, Inc. (RTi), senior editors from Houston-based PetroChemWire (PCW); and CEO Michael Greenberg of The Plastics Exchange.

PE Prices Up for Short Term

Polyethylene prices moved up 3¢/lb in September as suppliers pushed to reclaim at least part of the 6¢/lb loss of previous months. They attributed the move to a weather event in the Texas Gulf Coast; but no force majeure declarations were reported, and transportation and production infrastructure in the PE segment was restored quickly after the heavy rains and flooding, according to Mike Burns, RTi, v.p. of PE markets, and PCW’s senior editor David Barry. There were also reports of a new 8¢/lb increase, effective Oct. 1, though one supplier posted a 4¢ hike. The Plastic Exchange’s Greenberg noted that while there might be some valid reasons behind the September hike, implementation of the additional October increases was very unlikely barring another major storm or escalating hostilities in the Middle East. 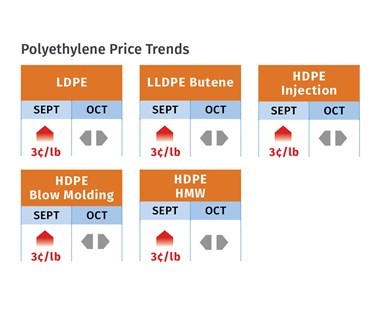 Both Burns and Barry ventured that the 3¢/lb increase would most likely be reversed in October-November, barring a major disruption. Said Burns, “Processors are in the best position in years to negotiate new-year contracts.” He characterized PE demand as very active in August due to low prices. He saw September demand as sluggish due to pre-buying when prices fell. He noted that Southeast Asian PE prices could have a significant impact on late fourth-quarter prices. He explained that low regional prices are stalling exports, which will then swell domestic suppliers’ inventories and can translate into lower prices. Barry noted that while more new capacity is slated to come on stream, startup of most projects was being delayed.

Polypropylene prices were likely to move up by 1¢/lb in step with propylene monomer after remaining flat in August. The slight increase was attributed partially to a fire at an ExxonMobil propylene cracker and the Saudi Arabian oil-fields attack. Prices were expected to be relatively stable in October-November, give or take a penny, according to both PCW’s Barry and Scott Newell, RTi’s v.p. of PP markets. “There’s a slight downward potential for that time frame,” Newell said. “PP prices for secondary markets and exports have been heavily discounted.” 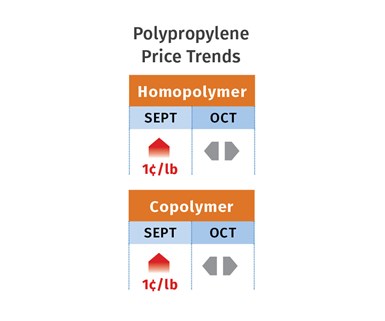 He characterized demand as stagnant, with many key markets showing negative growth compared with 2018, including automotive, consumer goods, and film sectors. Newell said PP suppliers’ inventories increased by 55 million lb and days of supply were at 38, which translates into a very well-supplied market. While both LyondellBasell and Braskem had planned maintenance outages in September-October, Newell doubted that there would be any tightness. Both Newell and Barry see PP processors as having more of an edge on 2020 contract negotiations as a result of the supply/demand imbalance.

Polystyrene prices were flat in September, following a 1¢/lb drop in August. One supplier called for a 3¢/lb increase on Oct. 1, while another indicated flat pricing. According to both PCW’s Barry and Robin Chesshier, RTi’s v.p. of PE, PS and nylon 6 markets, a slight increase in September benzene contract prices (5¢/gal) to $2.60/gal. was lower than the year’s previous low of $2.66/gal in July. Moreover, low spot styrene monomer and butadiene prices-(41¢/lb and 37.5¢/lb, respectively) did not support a price increase. 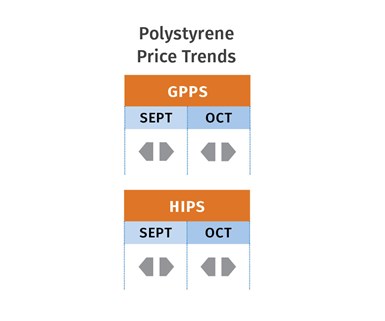 Both industry sources noted that prices in Asia for monomer and PS have been dropping, and that barring a major global disruption, prices in October were likely to remain flat with some potential for further PS price erosion this month and next. Said Chesshier, “Benzene will be the main driver.”

PVC prices in September were flat after the August 1¢/lb decrease.  PCW’s senior editor Donna Todd reported that while buyers were glad to see the predicted August decrease, they were disappointed that another expected 1¢/lb decrease did not occur in September. Meanwhile, suppliers issued a 3¢/lb increase for Oct. 1. 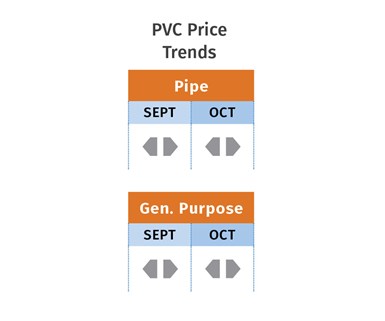 Both Todd and Mark Kallman, RTi’s v.p. of PVC and engineering resins, were skeptical about the move, due to both a weak export market and a domestic market that never quite recovered from its early season delay. Said Kallman, “While demand has been steady, the market has not seen the boost that was expected.” Both sources noted that suppliers were hanging their price moves on higher spot ethylene prices due to some production disruptions. Late-settling ethylene contract prices for August and September were expected to end up rising more than 2¢/lb. RTi’s Kallman ventured that PVC prices in October would be at most 1¢/lb higher, followed by flat pricing this month. PCW’s Todd also ventured that there is potential for a further 1¢/lb decline before year end. He reported, “Export prices have been falling in concert with Asian prices, which is expected to put pressure on the domestic market and make a domestic price increase difficult to achieve.”

PET prices ended September at 47-51¢, down from 50-53¢/lb at the end of August. This price is for most imported resin from around the world, as well as domestically produced PET, according to PCW senior editor Xavier Cronin. Meanwhile, offgrade PET and “penciled-down” prime PET (resin sold as offgrade when a seller needs to get rid of prime inventory) was a few cents lower. 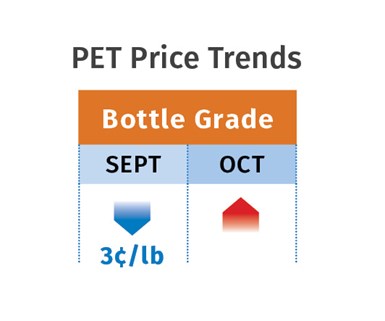 Cronin noted that PET prices for October started out steady. However, some market sources project that prime PET prices could rise in October and for the rest of the year, due to higher global costs expected for PET feedstocks, including PTA and MEG. PET could possibly go up 4¢lb or more, according to one domestic PET resin seller. Demand remains weak due to the end of the heavy PET seasonal consumption period.