Time is money. Downtime is lost money. Perhaps nowhere is this adage more relevant than in extrusion. And within extrusion, it is most appropriate in operations that run around the clock. So, when it came time to select a system to clean blown-film dies, the shrink- and stretch-film segment of Intertape Polymer Group (IPG) went looking for a system that would do the job as quickly as possible, critical for its 24-7-365 operations.

IPG is a recognized leader in film-based, pressure-sensitive and water-activated tapes, as well as polyethylene and specialized polyolefin films, protective packaging, engineered coated products and even machinery for packaging. Headquartered in Montreal and Sarasota, Fla., IPG employs approximately 3500 with operations in 31 locations, including 21 manufacturing facilities in North America, four in Asia and one in Europe.

At its plant in Tremonton, Utah, IPG makes a range of shrink and stretch films with up to seven layers on four blown-film and one cast-film line. Don Flint, processing technician at the Utah plant, recalls that in 2019 the company began steps to replace its gas-fired burnout oven, which IPG says had become inefficient and labor-intensive. IPG looked at alternative cleaning technologies—notably dry-ice blasting—before settling on technology offered by Germany’s Schwing Technologies (Schwing North America is in Princeton, N.J.). 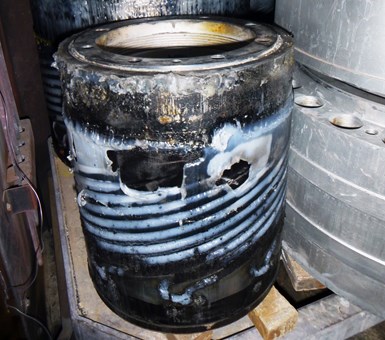 IPG opted for Schwing’s VacuClean system. This is a thermal-cleaning oven that heats up dies slowly and uniformly under vacuum for even heat penetration, reportedly with no hot spots, flames or burning. It’s a three-phase system (heat-up/melt-off, pyrolysis, and controlled oxidization) that is said to provide complete clea-ning while eliminating any damage from exothermic reaction, such as hot spots and burning.

IPG runs the VacuClean on dies of 32 to 48 in. diam, about four times/yr. It also uses it to clean screen packs and cast-film feedblocks. Compared with its previous cleaning system, the Schwing unit has “cut downtime in half at least,” Flint says. Adds Holland Butler, maintenance manager at IPG’s Utah facility, “The VacuClean electric system is more efficient than our previous gas-to-burn oven. Plus, our previous gas system required a lot more labor after the cleaning cycle to do additional cleaning and reassembly. All told, this took seven to 10 days. With VacuClean, once the dies are cleaned our operators just need to dust them off and reassemble. The labor is much less; the dies are clean out of the oven. The entire process takes about 48 hr.”

IPG also gives kudos to Schwing in customer service and support. Says Flint, “We send them run data and they evaluate water-flow pressure setpoints and burn data to help us ensure the process is optimized.”

Notes Andrew Dickinson, sales manager for Schwing North America, “Decreasing downtime of the blown-film extrusion line is one of the greatest justifications for installing a VacuClean system.” Some customers reportedly are able to cut their downtime from 10 to 14 days down to two or three days. “We have spoken to blown-film processors that send their dies out for service cleaning and wait for two to three weeks or more. All this downtime of the extrusion line can cost companies hundreds of thousands of dollars per year.” On average, says Schwing, most of its customers replacing their old cleaning methods and optimizing their cleaning process achieved a return-on-investment time of 1.5 years or less. 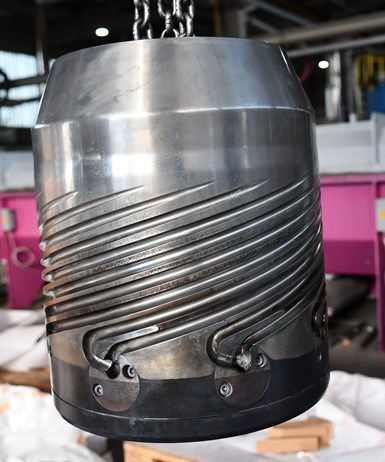 Clean spiral-mandrel section of blown film die (not an IPG die) after cleaning in Schwing oven.

On top of its ability to do the job faster, Schwing says the VacuClean system is more environmentally friendly than other ovens. Dickinson elaborates, “VacuClean uses an efficient electrically heated package with very low operating cost. A full cleaning cycle will only cost a few dozen dollars in electricity and water per run. There is no gas required. The built-in catalytic converter eliminates pyrolysis fumes. There is also no contamination of cooling water.”

In addition to the cleaning oven, Schwing also provides ancillary equipment for handling of dies, such as a loading table with rollable pallet (manual or motor-driven), crane forks, and the like.