Macro Engineering has a new microlayer blown film die capable of 30 or more layers. Its feedblock splits the layers radially in a helical pattern.

Extrusion machinery at the June NPE show in Chicago showed inventive ways to get more out of your floorspace and materials. One approach is to double output with conventional asynchronous AC motors on direct-drive, high-output extruders instead of more expensive synchronous torque motors. Another is new microlayer feedblocks and dies that can make films with higher properties for the same cost in materials. Also shown were a bunch of relatively inexpensive ways to improve efficiency.

In compounding, there was a novel corotating conical twin-screw machine, an unusual lab line for starch-resin compounding, and new ways to improving corrosion and wear resistance. (Additional NPE extrusion/compounding news appeared in May and June—see Learn More box.)

AC drive motors, modified with hollow shafts and integrated thrust bearings for the extruder screw, are far less expensive routes to high-speed extrusion than the permanent-magnet, synchronous torque motors or four-motor drives that have been used so far with high-speed technology. Welex displayed its new HS 300 high-speed sheet extruder with a 500-hp AC drive from ABB. The 3-in., 40:1 vented machine can extrude up to 5000 lb/hr of HIPS, PP, or PET. Its hollow motor shaft allows water cooling of the screw and easy screw extraction from the front. Welex also air cools both motor and barrel, which are usually water cooled in high-speed systems.

Battenfeld Extrusionstechnik (BEX) in Germany (represented here by American Maplan) and SML Maschinen GmbH in Austria also recently switched their direct-drive high-speed extruders to asynchronous AC motors. Both use motors built by Elin EBG Motoren in Austria. BEX reports energy savings of up to 15% with an AC motor instead of a DC motor and gearbox.

Macro Engineering & Technology built an 8-in.-diam. blown film die for up to 30 microlayers two years ago but says more layers are possible. Its feedblock forms microlayers by radially splitting layers in a helical pattern, then feeding this structure to an annular die. Two or more materials can alternate or overlap.

Kiefel Extrusion introduced its High Efficiency Mixing section, comprising a series of mixing rings with numerous holes that extend from the bottom of the screw to the cylinder wall, opening into a shear gap. Material flowing from these holes forms a multilayer flow, which is then fed into numerous holes in the next ring, and so on. Temperatures remain low at high throughput rates, Kiefel says.

Two firms have developed new automatic gauge-control air rings. Jin Ming Plastics equipment from China (new U.S. office is in Tryon, N.C.) built its first one earlier this year for up to 650-mm diam. dies with 72 points of control, but it could be built even larger. Dies below 350 mm diam. use 48 points of control. Jin Ming uses the gauge-control air ring in combination with die-based auto-gauge control.

Future Design Inc. has also built a prototype of its first automatic gauge-control air ring and expects to offer it commercially in a few months.

Macchi showed a new wireless extrusion control panel that can be rolled into different positions around a blown film line. This helps operators move closer to the bubble during thread-up or product changes.

In biaxial films, DMT Technology in Austria recently shipped its first Mesim (mechanical simultaneous) orientation system to a Japanese customer to make high-clarity optical film. DMT (U.S office in Lansdowne, Va.) introduced the Mesim concept at the K 2007 show in Germany. Simultaneous TD/MD stretching is done with moving clips connected by V-shaped linkages on a standard double-chain track. The clips start as an “I” perpendicular to the web, are pushed and pulled forward into a “V” and then flattened into an “I” again, twice the length of the initial unopened clip and now parallel to the web, drawing the web out with them. TD and MD stretch ratios are independent and can be adjusted during production.

Mesim can be retrofitted onto existing biax lines. It costs slightly more than a standard MD/TD orienter, but takes up less room. It’s less expensive than the only commercial alternative, called Lisim, developed a decade ago by Bruckner Maschinenbau in Germany.

For thin PC sheet, Breyer GmbH in Germany showed a new die that adjusts film profile with temperature zones in the lip instead of die bolts, reportedly allowing 75% to 80% faster start-ups. Breyer has built five units, the largest 3 meters wide.

Rollepaal bv in the Netherlands (U.S. office in Glen Burnie, Md.) showed for the first time in this country a 32-in.-diam. pipe with twin smooth walls and ribs holding the walls apart. This “hollow-core” pipe is said to be a higher-output, lighter-weight alternative to corrugated pipe. Rollepaal’s patented technology has been used on small hollow-core pipe for 20 years, but the company only last year commercialized larger diameters up to 40 in. for PVC. Rollepaal is looking for partners to produce and test sewer pipe.

R&B Plastics Machinery, which builds single-screw extruders for its blow molding machines and for sale by other vendors, this year began offering its own brand of Max extruders in 10 sizes from 1 to 10 in. diam. and 24:1 to 32:1 L/D.

Metallurgies based on hot isostatic pressing (HIP) of metal powders are growing in popularity for adding abrasion and corrosion resistance to twin-screw equipment. Last fall, Entek invested in four new machining centers, allowing Entek Plus, its new parts and service unit, to build and apply HIP to conical PVC twin barrels, believed to be a first.

A new coex die with up to five layers for automotive or cosmetics barrier tubing was shown by Boston Matthews.

To measure tube diameter and eccentricity, Sikora AG in Germany (U.S. office in Peachtree City, Ga.), introduced the Centrix 8000XY, the only such device using LED diodes as the light source. LED diodes are combined with high-resolution CMOS sensors and to calculate diameter from the width of the product’s shadow.

PTi Processing Technologies International added features to its Titan computer controls, called Titan Plus. A voice now accompanies an alarm signal, telling the operator what caused the alarm so the operator knows quickly if the problem is serious or not.

Addressing the interest in biopolymers and renewable resources, Entek Extruders displayed a corotating twin-screw lab model set up to compound starch. It injects 10% to 30% water into the extruder barrel at section three, followed by side feeders for natural fibers, pigments, and additives. Since water cannot be used for pelletizing starch, Entek extrudes strands onto an air-cooled, perforated conveyor belt before the strands are cut. Starch is extruded at 176 to 248 F. Lower temperatures make opaque pellets, higher temperatures make them clear.

Steer also showed its new “shovel” twin-screw element for a feed section to process low-bulk-density materials. These elements have flights scooped out on the pushing edge, so they pile up powders and fluffy material in front of the flight. Steer says these can triple output of compounds with fillers like talc.

Farrel Corp. showed a modification of its twin-rotor continuous mixer with an adjustable shearing dam, which extends about 2 in. into the melt stream to increase shear or retracts flush with the barrel. It’s part of an update of the CP 550 mixer, which is longer (6:1 L/D vs. 5:1 before) and more powerful (150 hp, up from 100 hp). The machine now has atmospheric vents with an automatic plunger to push material back into the barrel.

Pelletizer dies now can be ground inexpensively in the user’s plant, rather than having to be sent out for grinding. BKG Underwater Pelletizing Systems (part of the Kreyenborg Group) has developed a clever grinding tool that can be installed in place of the cutter hub to grind the die face smooth again while still on the processing line.

Arlington Plastics Machinery, an equipment repair firm, is now representing the new line of slide-plate screen changers from MGB Engineering Co. They have a bronze seal to prevent leaking.

The Conair Group introduced its first gravimetric extrusion control system and film-scrap reclaim system completely of its own design. (Previously, it had supplied equipment from other vendors.) Conair’s PLC-based TrueWeigh gravimetric control uses a continuous loss-in-weight weigh hopper to track the amount of material being fed to the extruder. Interfacing with existing extruder controls, TrueWeigh adjusts screw rpm and haul-off speed to maintain consistent product output (in lb/hr, ft/min, or weight/ft). In coextrusion, TrueWeigh can coordinate the operation of up to 12 extruders, controlling the relative weight of different layers as well as total product dimensions. Each extruder has its own loss-in-weight hopper that communicates with a central controller that coordinates the extruder speeds to maintain layer ratios. It has a 5.7-in. LCD touchscreen and stores 250 recipes.

Also new is Conair’s TrueBlend EXT extrusion blender, which incorporates a TrueWeigh extruder control system. This batch blender has new, proprietary software that dispenses a series of ever-smaller doses until the target is reached, rather than under- or over-dispensing and correcting on the next batch. In monolayer lines, the TrueBlend EXT controller can control blending, screw speed, and hauloff speed. In coextrusion, TrueBlend EXT interfaces with TrueWeigh controls on other extruders to maintain layer ratios.

In addition, Conair introduced a film-scrap reclaim system that recovers edge trim, roll scrap, and hand-fed film scrap, grinds it, and refeeds it to the extruder without hangups, surging, or clumping. The system can handle up to 25% scrap or more, thanks to the new ScrapSaver feeder, which contains a fluff crammer and keeps virgin and reground fluff separate in a column—with pellets surrounding the fluff—until just before the extruder feed throat. 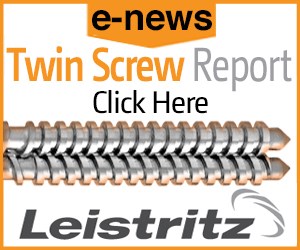