Small gas tanks, the type used on equipment like lawnmowers and snowblowers, have typically been produced from high-density polyethylene (HDPE). Automotive gas tanks are subject to rigorous emission standards that require multilayer constructions employing barrier materials designed to prevent diffusion of gasoline through the tank wall. Small gas tanks are not required to conform to these standards. In addition, they are of a size that allows them to be produced, in most cases, by injection molding. The typical small tank is a two-piece design produced in a family mold. The two halves are thermally welded together before they have cooled completely. While the actual tank designs can vary substantially, the manufacturing process is generally the same.

In the 1990s the material of choice for small gas tanks for the entire North American industry was an HDPE with a melt flow rate (MFR) of 4.0 g/10 min and a density of 0.946 g/cm3. This is near the minimum density for materials classified as HDPE, and in combination with the average molecular weight associated with this MFR value, the material produced a good balance of load-bearing properties and ductility. Then, as often happens in the world of commodity plastics, a decision was made by the material’s supplier to discontinue the grade. At that time there were no direct replacements. Grades with comparable densities generally had higher average molecular weights (lower MFRs). Available materials with the same MFR typically had higher densities. 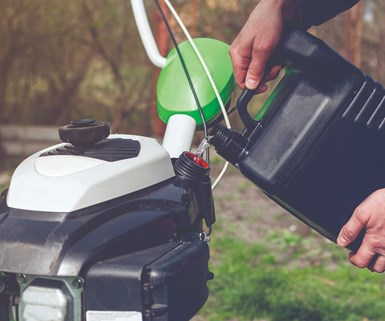 A widespread industry investigation of cracked fuel tanks resulted from a change of 0.006 g/cm3 in the density of the material used to produce the tanks.

The supplier of the discontinued material did produce, and continues to produce to this day, a material with the same density and a nominal MFR of 2.2 g/10 min. This would have been the ideal material to replace the obsoleted resin, and it is a grade targeted specifically for this type of application. However, as we have discussed when reviewing the industry understanding of MFR, many processors continue to believe that the pressures required to fill and pack a mold cavity are inversely proportional to the difference in MFR. All the processors involved in manufacturing these tanks expressed doubts about their ability to fill the molds with the higher viscosity material and they all refused to sample the material. Instead, they opted for a material with an MFR of 4.0 g/10 min and a density of 0.952 g/cm3.

The transition appeared to be seamless. However, in less than a year the first cracked gas tanks were discovered in the field. Investigations into the cause of the cracking went on for months and involved multiple analytical-services organizations as well as the end users who were putting these gas tanks on their products. The Consumer Product Safety Commission became involved, contributing the usual lack of scientific understanding that government organizations can be counted on to provide. Companies went out of business, others walked away from supplying the small gas tanks, deeming the risks too great. At least one end user dedicated a great deal of time and talent to understanding the interaction between material selection, part design, and processing conditions. All this activity revolved around a change of 0.006 g/cm3 in the density of the material being used to produce the tanks.

Internal stress is a fact of life in injection molding.

The analytical work established that the failure mechanism was environmental stress cracking (ESC). This is a mechanically driven process accelerated by the presence of a chemical influence. But to properly diagnose the factors that contribute to ESC it is essential to understand the interaction between material properties, part design, assembly methods, and the application environment.

Internal stress is a fact of life in injection molding. The pressures and flow rates associated with filling and packing a mold and the volumetric changes that accompany the cooling process will produce several hundred pounds per square inch of molded-in stress even in a well-designed part. HDPE is the commercial polymer with the highest degree of crystallinity, and as the density increases the degree of crystallinity increases along with it. This increases the change in volume associated with cooling. In addition, assuming that a polymer is capable of crystallizing, there is a window of opportunity for crystallization to occur. The temperature of the material must be below its melting point but above its glass-transition temperature (Tg). The Tg of polyethylene is -130 C (-202 F). The lowest recorded temperature on our planet, occurring on the East Antarctic plateau, is -98 C (-144 F). This means that every polyethylene part in use anywhere on Earth is capable of crystallizing for as long as it exists.

Fortunately, most of the structural organization associated with crystallization in polyethylene is accomplished in the first 48 hr after the part is produced. Another measurable incremental change occurs in the ensuing four to six weeks. But at some level the process is always occurring and it will occur more rapidly in warmer environments. Hot-plate welding of parts that are only a few minutes old adds another layer to this picture. Once the housing halves are bonded, the continued cooling and shrinkage of the parts causes stress to build up locally near the weld zone, where movement of the polymer is constrained by the weld. And then there is the influence of the gasoline on the properties of polyethylene.

Polyethylene is a non-polar material and consequently it tends to absorb fluids that are also non-polar. These include anything made of hydrocarbons such as mineral oil, motor oil, and gasoline. Studies performed during the failure-analysis investigations showed that polyethylene can absorb 7-8% of its weight in gasoline and the strength and modulus decline by about 50% as a result. As would be expected, the parts also change dimensions as this absorption takes place. All these factors contribute to the development of stress.

Polyethylene is more susceptible to ESC as the density increases.

In examining the failures some patterns emerged. First, cracks always appeared in the lower half of the assembly, where exposure to gasoline would be more consistent. Second, the cracks tended to originate near the thermal weld joint. Third, only a small percentage of the tank designs were susceptible to failure. Accelerated testing performed at an elevated temperature over a period of several months showed that most of the designs did not exhibit failures. This helped to distinguish between the mechanism of ESC and a pure chemical response of the polyethylene to the application environment. Chemical attack occurs independent of design. 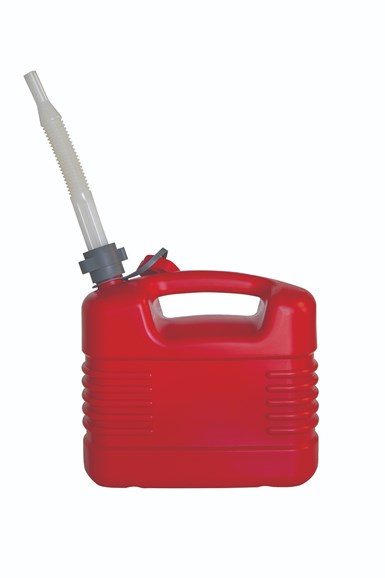 ESC of small gas tanks is an interaction of material properties, design, and processing, as well as the presence of a chemical influence—namely, gasoline.

Polyethylene is more susceptible to ESC as the density increases. At lower densities the non-crystallized regions can absorb and manage the energy associated with increased levels of stress. As the density of the polymer increases the amorphous content in the material decreases. This increases strength and stiffness, but reduces toughness. Lower-density polyethylenes can withstand higher levels of strain before they fail. But as density increases, the likelihood of brittle failure increases. The failure to understand the interaction between molecular weight and density resulted in a very costly performance problem that very nearly resulted in regulations mandating multi-layer construction of these small nonautomotive gas tanks. The problem was solved by a material supplier who recognized a market opportunity and developed a grade with an MFR of 3.3 g/10 min and a density of 0.945 g/cm3. Apparently, an MFR of 3.3 was close enough to 4.0, and the processing people were willing to try it. But it was the return to a lower density that was the key to solving the cracking problem.

In our next installment we will look at some secondary aspects of polyethylene properties that are part of the material selection options available today. These influence performance as well as processing. And, as is usually the case, as performance improves, processing becomes more challenging.

ABOUT THE AUTHOR Mike Sepe is an independent, global materials and processing consultant whose company, Michael P. Sepe, LLC, is based in Sedona, Ariz. He has more than 40 years of experience in the plastics industry and assists clients with material selection, designing for manufacturability, process optimization, troubleshooting, and failure analysis. Contact: (928) 203-0408 • mike@thematerialanalyst.com.