Part 1 of 6: The Fundamentals of Polyethylene

You would think we’d know all there is to know about a material that was commercialized 80 years ago. Not so for PE. Let’s start by brushing up on the basics.
#polyolefins

Polyethylene has been commercially available for 80 years. With all that time to gain experience, you might expect that we would have learned everything there is to know about this material family. However, judging by the conversations I have with people about selecting the correct PE for an application, the industry has a lot to learn.

Polyethylene is considered a “commodity” material, a designation that gives the impression that not much thought needs to go into picking the correct grade of material. But PE can be remarkably complicated simply because it is the only polymer that is available across a wide range of densities.

But PE can be made to densities that cover a range of 0.86-0.97 g/cm3 without altering the molecular composition one bit. And across this range the polymer can present a wide range of properties.

It wasn’t always this way. Polyethylene, like many polymers that we rely on commercially today, was created by accident. Researchers experimenting with gases under high pressure discovered that when they conducted experiments with ethylene gas, they obtained a solid compound that was the result of polymerization of the ethylene molecule. It took about six years to commercialize the material, and by today’s standards the polymerization process was crude and produced a very narrow range of products.

Today we call these materials low-density polyethylene (LDPE). But this nomenclature did not exist at the time because there was no such thing as high-density polyethylene and no understanding that such a material might even be possible. We have understood for some time that LDPE is made of up of chains that contain a significant amount of branching. The long branches prevent the chain backbones from packing closely together. This limits the ability of the material to crystallize and reduces the intermolecular attractions that are responsible for providing load-bearing properties such as strength and stiffness. 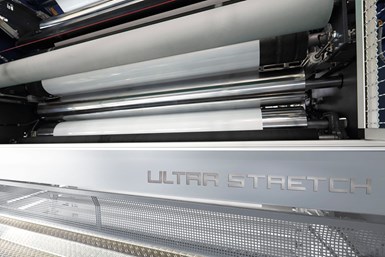 Continuous developments in PE have allowed processors to engineer films thinner and stronger than ever. (Source: Reifenhauser)

The initial use of PE was as insulation for wire and cable, so the flexibility of LDPE was a positive attribute. However, if we were to try to make a product such as 5-gal pail out of LDPE, fill it with 40-60 lb of contents, and then stack the full containers three or four high, they would quickly collapse. So understandably, PE applications were somewhat limited through the 1940s and into the mid-1950s.

Enter Karl Ziegler and Guilio Natta. In 1954, working independently and somewhat competitively, they discovered catalysts that allowed the polymerization of ethylene to take place without the extreme temperatures and pressures needed previously. More importantly, the resulting molecule was largely free of the branches that characterized the results of the high-pressure processes. These linear molecules could pack closer together creating a very different set of properties. High-density polyethylene (HDPE) was stronger, stiffer, and harder, all consequences of the higher degree of crystallinity that arose from the more regular arrangement of the linear polymer chains. It was also less impact resistant, especially at cold temperatures. But the enhanced strength and rigidity of the material made products like those 5-gal pails possible.

Two researchers at Phillips Petroleum had discovered a similar process about a year before Ziegler and Natta, and this system for polymerizing PE is still known today as the Phillips process. However, the technical accomplishment became of subject of long, drawn-out litigation that was not settled until the 1980’s, and by that time the Ziegler-Natta designation had firmly taken root and they shared the Nobel Prize in Chemistry in 1963 for their accomplishment.

Once these transition-metal catalysts became known, the world of polyethylene expanded rapidly. A wide range of densities from 0.91-0.97 g/cm3 could be manufactured with a corresponding wide range of properties. Additional advances produced linear low-density polyethylene (LLDPE) in the late 1970s. This material introduced branching in a more controlled manner than was possible in traditional LDPE.

At about this same time a new revolution in catalysts was just getting started that would have far-reaching consequences for polyethylene. In 1977, Walter Kaminsky at the University of Hamburg demonstrated the utility of metallocene catalysts in polymerizing PE. It has been a long, winding road of development for these materials, but through the late 1990s and into the first two decades of the new millennium, PEs made with these new catalyst systems added forms of the material that were previously impossible. Metallocene-catalyzed LLDPE is more difficult to process than Ziegler-Natta LLDPE, just as the early versions of LLDPE were more challenging than traditional LDPE. But as processors caught up with these materials, the improvements in performance became evident. Films could be downgauged substantially while producing structures with equivalent performance. Clarity, dart impact resistance, and tear strength were all improved.

The increased level of control over polymerization afforded by these catalysts led to a new set of polyethylene materials with densities as low as 0.86 g/cm3. Low levels of crystallinity produced a family of materials referred to as plastomers: flexible, tough materials that could duplicate the properties of materials like ethylene-vinyl acetate (EVA) copolymer at much lower densities and with improved levels of thermal stability in the melt.

With all this development, the task of selecting the right PE for an application has become increasingly complicated. Selecting the right grade of PE has always been more difficult than selecting other resins, precisely because of the unusual versatility of the polymer. In most polymer families, unfilled and unmodified grades are distinguished primarily by their molecular weight. Higher-molecular-weight grades perform better but are more difficult to process because of their higher melt viscosities. In general, the molecular weight of PE is captured in the melt flow rate or melt index specification.

But with PE there is another property that must be considered when defining the performance of the material: the density.  The ability to specify two properties instead of one provides greater variety, but it also makes it more difficult to arrive at an appropriate selection. The person selecting the material must understand how properties change as a function of both molecular weight and density. (Molecular-weight distribution is yet another factor that must be considered, but we will deal with that later).

In our next column we will define the interaction between molecular weight and density and then go on to illustrate the importance of knowing how to select grades of PE based on these two interrelated but ultimately independent parameters.

Mike Sepe is an independent, global materials and processing consultant whose company, Michael P. Sepe, LLC, is based in Sedona, Ariz. He has more than 40 years of experience in the plastics industry and assists clients with material selection, designing for manufacturability, process optimization, troubleshooting, and failure analysis. Contact: (928) 203-0408 • mike@thematerialanalyst.com.