The distance between Chile and Germany is some 7,770 miles.

Still, Porsche and Siemens Energy, two German companies, are partnering (although with three energy firms, AME, ENAP and Enel) of the construction of a pilot plant in Chile that is expected to lead to what will be the world’s first integrated, commercial, industrial scale plant for the development of what they call “e-fuels.” 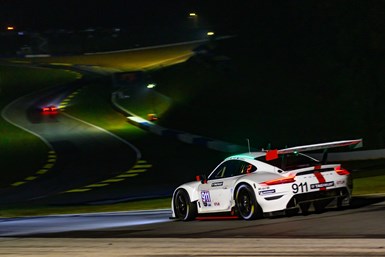 Because they want to take advantage of the winds in southern Chile, thereby being able to produce the fuel in a climate-neutral manner.

The German Federal Ministry for Economic Affairs and Energy is providing a grant of approximately 8 million euros for the undertaking.

In the pilot phase at the “Haru Oni” operation, it is anticipated that there will be 130,000 liters of e-fuels produced. That will occur in 2022.

By 2024, they anticipate phase two will result in 55 million liters of the fuel, and that to be increased by an order of magnitude, to 550 million liters by 2026.

The process uses wind power to power electrolysers that split water into hydrogen and oxygen. Then CO2 is filtered from the air and combined with the green hydrogen created by the electrolysers. This produces a synthetic methanol.

The renewable methanol is turned into gasoline using a methanol-to-gasoline (MTG) process licensed and supported by ExxonMobil. That gasoline can then be readily transported for vehicle use.

the fuel can be used in vehicles with combustion engines, which means there is a comparatively small amount of emissions produced.

Porsche is going to be the primary user, using the fuel for its motorsports activities and at its Porsche Experience Centers. The longer-term plan would be to use it in production vehicles.

How Serious Is Porsche?

That’s its initial investment in the Haru Oni pilot.

“Electromobility is a top priority at Porsche. E-fuels for cars are a worthwhile complement to that – if they’re produced in parts of the world where a surplus of sustainable energy is available. They are an additional element on the road to decarbonization. Their advantages lie in their ease of application: e-fuels can be used in combustion engines and plug-in hybrids, and can make use of the existing network of filling stations. By using them, we can make a further contribution toward protecting the climate. As a maker of high-performance, efficient engines, we have broad technical expertise. We know exactly what fuel characteristics our engines need in order to operate with minimal impact on the climate.”

So combustion engines still have life.

Christian Bruch, CEO of Siemens Energy, makes an interesting point about the transformation of supply chains:

“Establishing a sustainable energy economy is going to require some rethinking. Renewable energy will no longer be produced only where it’s needed, but where natural resources like wind and sun are available on a massive scale. So new supply chains are going to arise all over the world to carry renewable energy from one region to another. That’s especially important for Germany, which – bottom-line – has to import energy if it’s going to meet its nationwide demand. Hydrogen will come to play an increasingly important role in storing and transporting energy. Which is why the German government’s support for the project is an important signal.”

To be sure, countries have been importing petroleum-based fuels for decades.

But with an awareness of the importance of achieving reduced carbon emissions, there needs to be new approaches.

So if it means building a facility on a different continent in a different hemisphere, then that just might be necessary, as Siemens Energy, Porsche and their partners will discover.