Prices of all the volume commodity resins moved up sharply after the unprecedented mid-February winter storm that hit the Gulf Coast, shutting down as much as 80-85% of production of key feedstocks and resins. The limited public information from resin suppliers on restarts or damage to the facilities contributed to an uncertain outlook on resin availability. As part of the fallout, demand appears to have surpassed supply for all volume commodity resins with perhaps the exception of polystyrene. Prices reacted accordingly, most extremely for PP. It was expected that before the end of March, there would be a better assessment of where things stood. These are the views of purchasing consultants from Resin Technology, Inc. (RTi), senior editors from PetroChemWire (PCW), and CEO Michael Greenberg of The Plastics Exchange.

Polyethylene prices moved up 7¢/lb in February, and suppliers issued another 7¢/lb for March, for which implementation was largely expected by Mike Burns, RTi’s v.p. of PE markets, PCW senior editor David Barry, and The Plastic Exchange’s Greenberg. Burns saw solid potential for additional increases or resin surcharges, which would be supported by continued good demand through the second quarter and higher oil prices, until PE resin inventories recover to November 2020 levels.

In the best-case scenario, Barry ventured that April prices could be flat. “Unless something happened on the demand side of things, there will be more increases. I don’t see demand weakening. I expect exports—typically accounting for nearly 40% of production, are likely to disappear for a few months.” He expected it would take suppliers two to three months to be able to take on new business beyond domestic and export contract obligations. He noted that contract customers were seeing allocations as deep as 50% and spot buyers were having to pay above prime contract prices for even wide-spec material. 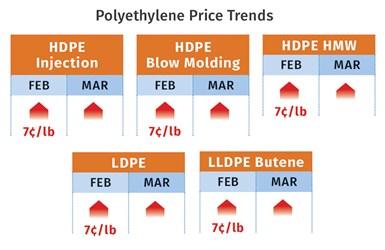 Reporting on the spot market, Greenberg noted that blow molding HDPE, the vast majority of which is produced in the Gulf, had become increasingly challenging to source. He noted that blow molding resin prices had risen the most among all PE grades—up 26¢ in February, and 42¢/lb since the beginning of the year. “High-flow LDPE and LLDPE resins for color, compounding and injection molding are practically as scarce, and supplies of HDPE for injection molding have been thinning by the day. A good percentage of LDPE and LLDPE film resins are made in Canada and are unaffected by the Houston storms—but even so, few fresh offers have appeared in weeks.” He noted that ethylene monomer costs had rallied along with the resin, with spot ethylene reaching 51.5¢/lb, the highest since 2014.

Polypropylene prices in February moved up 28¢/lb in step with propylene monomer contracts, which settled at 88.5¢/lb, plus an additional 5¢/lb supplier margin expansion for a whopping total increase of 33¢/lb, according to Scott Newell RTi’s v.p. of PP markets, PCW’s Barry, and The Plastic Exchange’s Greenberg. These sources anticipated that the monomer had the potential for another double-digit increase in March, and suppliers were already declaring a 6¢/lb margin expansion for that month. All three saw the key driver as constrained propylene supply, with low refinery rates due to low demand, producing less propylene byproduct, and ongoing maintenance issues that have plagued PDH units producing on-purpose propylene.

Newell ventured that most plants will have restarted by mid-March, “Everything is very fluid. The market was already in historic unprecedented waters. If it wasn’t for the storm, we were on the cusp of the market taking a sharp correction, which I think will still happen fast and hard—possibly as early as April, with a price decline of 30-40¢/lb, and perhaps more.” He noted that processors were scrutinizing everything, including talk of shutting down non-profitable product lines and even force majeure actions. “The cost of a railcar of PP was $150,000 more than less than a year ago—this is where people can go out of business.” 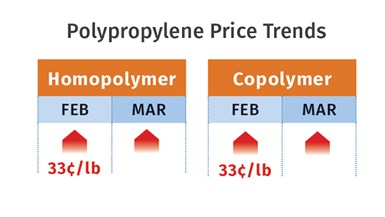 Noting that the reaction to the high PP prices had started prior to the storm, PCW’s Barry expected it would intensify especially as lower-priced imports start to come in. “Domestic PP prices are unsustainable and while demand from automotive and the nonwoven fiber sectors is strong and they may well incur the cost, that will not be the case with the lower commodity-type products like storage containers or packaging.” He expected supply recovery to take two to three months, but noted that the monomer may not recover at the same rate.

Reported Greenberg, “Volatility is on the rise, for a market that usually moves in penny increments, nickel and dime moves are becoming commonplace. The resin supply/demand dynamic is already so incredibly tight that even as prices have soared, numerous processors are eyeing shutdown situations due to a lack of resin to run.”  He described availability of all grades of spot PP as categorically tight, with PP clarified random copolymer as the most sought, and noted that when material sells, the next offering price comes in higher.

Polystyerene prices moved up 2¢/lb in February following the 5¢/lb January increase, amid very tight supply and somewhat steady demand, according to both Robin Chesshier, RTi’s v.p. of PE, PS and nylon 6 markets and PCW’S Barry. At least one supplier posted an 11¢/lb increase for March, and others were expected to take similar actions following the impact of the Gulf Coast winter storm. Forced shutdowns of benzene, ethylene, styrene monomer resulted in major increases in feedstock prices. Benzene moved up by 20¢/gal and ethylene by 10¢/lb, resulting in spot monomer prices moving up by 10¢/lb. According to Barry, the implied styrene cost based on a 30/70 ratio of spot ethylene/benzene was at 32.128¢/lb, up 7¢/lb in one week. There was no spot availability of HIPS and or GPPS. 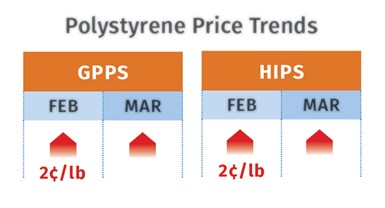 Both sources ventured that PS prices would increase in both March and April. They calculated that feedstock price increases after the storm equated to an increase of 8¢ to 9¢/lb in the production of PS, and also noted that April starts the busier season for PS demand. Neither expected that PS demand would outpace supply. Barry noted that there is only one PS plant being built and that is in Asia, where the demand globally is being driven by the appliance sector, not the low-end commodity products, many of which are being banned.

PVC prices rose 3¢/lb in February, following the January 4¢/lb increase, and suppliers announced a 7¢/lb hike for March, which was fully expected to go through, according to both Mark Kallman, RTi’s v.p. of PVC and engineering resins and PCW senior editor Donna Todd.

Kallman noted that PVC suppliers had outages prior to mid-February’s winter storm and that production through January and half of February had been strong. “March will be all about recovery and maintenance. Processors are not getting everything they need. This is really about supply and demand.” He ventured that April prices could be flat, but saw potential for another increase of 2-4¢/lb. 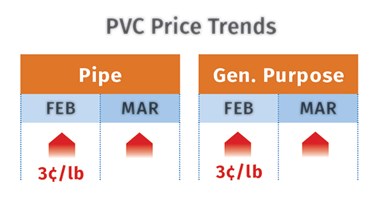 Likewise, Todd reported that prices were expected to rise farther during the second quarter, rather than retreat as some market watchers had predicted. Both sources noted that approximately 80-85% of PVC capacity was lost from plants that were either shut down or operating at very reduced rates.

PET prices at the start of March were at 70¢/lb for railcars delivered to the U.S. South and Midwest, up 4¢/lb from late February, according to PCW senior editor Xavier Cronin. Rising prices were tied to tight supply resulting from shortages from producers in Mexico and a 4.5¢/lb surcharge imposed by a large U.S. producer. 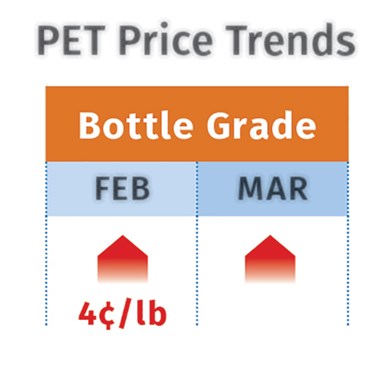 Disruptions to plants producing PET feedstocks in Texas in mid-February due to extreme weather boosted demand for March deliveries. Cronin reported that prices were expected to shoot up at least another 5¢/lb in March due to these supply-side dynamics. Meanwhile, demand remains robust, especially from the bottle and container sectors, due to strong demand for bottled water tied to COVID-19 issues and the extreme weather in February in Texas, where many residents went without running water for days or weeks.

ABS prices had moved up 7¢/lb by early January and suppliers were implementing another 7¢/lb in February, according to RTi’s Kallman. He anticipated that in March and April, prices would rise another 5-10¢/lb, driven primarily by higher costs of feedstocks—benzene, acrylonitrile, butadiene and styrene monomer due to production outages.

Polycarbonate prices increased 9-10¢/lb by early January, with suppliers seeking another 10¢/lb for February, which was expected to be fully implemented in March, according to RTi’s Kallman. Moreover, lead times rose to extremely high levels of 14-22 weeks following the weather-related feedstock and resin production interruptions. Two PC suppliers were on force majeure, while spiraling costs of benzene and propylene were expected to lead to another double-digit increase in the March-April timeframe. “Processors are not getting what they need and low-cost imports are no longer an option, as importers were increasing prices. If operations are restored, we may see some market recovery in May.”

Nylon 6 prices moved up 15¢/lb in January-February as suppliers implemented their annunced late fourth-quarter increases, based on higher prices of feedstocks and increased demand from automotive and fiber/textile sectors, according to RTi’s Chesshier. However, due to the Gulf Coast winter storm, which resulted in the shutdown of feedstock and resin plants, Chesshier ventured that further price increases were possible in April as demand was now outpacing supply.

Nylon 66 prices moved up 14-20¢/lb by the end of February, and prices in March-April were expected to go up by at least 10¢/lb, according to RTi’s Kallman. He cited continued strong demand from all key market sectors, such as automotive and construction, with lead times stretching to 15-20 weeks following the weather-related forced shutdown of nylon production, in addition to earlier unplanned shutdowns of production of key feedstocks.