Price of PP First to Plunge; PE, PS, PVC, PET Are Next

The impact of the coronavirus pandemic looms large over the entire plastics manufacturing chain, with high resin inventories, dropping demand, and record-low global prices of materials and feedstocks. Commodity resin prices are expected to plunge at least through mid-May. Other challenges include a significant decline in “non-essential” manufacturing production and an anticipated slowdown in some “essential” product manufacturing as a result of overbuying and/or difficulty in keeping enough healthy workers in the plants.

The disruption of global production networks continues to be a major uncertainty as industry sources try to make projections for the second quarter and the second half of the year. These are the views of purchasing consultants from Resin Technology, Inc. (RTi), senior editors from Houston-based PetroChemWire (PCW); and CEO Michael Greenberg of The Plastics Exchange.

Polyethylene prices were flat in March after a strong demand pull from consumer products resulting from the coronavirus impact. Suppliers suspended their 4¢/lb price increases for March, and there were expectations among buyers for price concessions in April and May, though nothing was confirmed at press time, according to Mike Burns, RTi’s v.p. of PE markets, PCW’s senior editor David Barry and The Plastic Exchange’s Greenberg.  Overall, these industry pros expected at least some decline in April, and definitely one in May. Indicators based on wide-spec and exports, which were down 4¢/lb, were pointing to a 4¢/lb drop in domestic PE prices by the end of April. 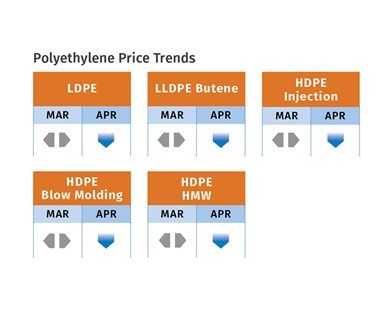 At the end of April’s first week, Greenberg reported the most spot PE prices were flat except for LLDPE film grades, which lost a penny, while injection molding grades dropped 2¢/lb on improved supplies. “Producers will wrestle with contract-price-decrease expectations that are surely to come, perhaps draw them out slowly with hope that demand returns and perhaps the oil market can continue to recover,” he said.

Both Burns and Barry concede that the strong demand was peaking in early April, partly because consumers had overbought throughout March. Said Burns, “We’re now at the top of the curve and then it will get ugly. Other countries are also seeing record-low costs of ethylene as oil prices collapsed, so there is nothing supporting a PE price increase. Manufacturers of non-essential PE products, such as sporting goods, are reportedly running their plants at only 30%. Expect suppliers to throttle back production. Until now, they have been running at 90-95% and exporting 40% of PE production.”

Adds Barry, “We expect a slowdown going into May on top of the drop in demand for durable goods, due to closed plants and unemployment. If low oil prices prevail, I can see multinational PE producers shifting their production elsewhere and dropping domestic production rates to the 70-80% range.” These sources also note that PE exports also have been challenged by a lack of shipping containers and several short-term port closures in Texas and India. Sums up Burns, “Potential demand destruction by the coronavirus will be the primary driver of PE market prices for the remainder of the second quarter. Oil price recovery will be the first indicator of improved demand.”

Polypropylene prices dropped 4¢/lb in March, in step with March propylene monomer contracts, though some suppliers were aiming to push through a 3-4¢/lb increase, separate from the change in monomer pricing. Their justification: tighter supply, according to both Scott Newell, RTi’s v.p. of PP markets and PCW’s Barry. However, both expected further price declines in April of 3¢ to 6¢/lb, with this month flat to slightly down. 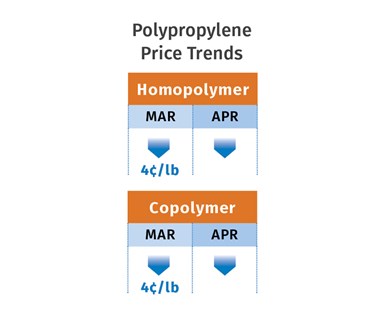 Barry characterized PP supply as balanced-to-snug, despite fears of weaker demand due to the spread of COVID-19. He noted that PP demand had dropped off in durables, especially automotive, but remained strong in packaging and disposable medical supplies. Going into April, Newell noted that while nonwovens continued to be strong, the industry started seeing some “cracks” in falling demand for consumer goods. He said this was indicated by sales at Walmart, Target and Dick’s Sporting Goods, with replenishment of orders down 30% to 80%. As a result, “Some PP processors were shutting down for at least a couple of weeks. Also, converters in some rural areas have started to see workers getting nervous about coming in to work. There were also material distributors and brokers that were canceling orders.”

Barry reported that some suppliers were unable to produce enough of certain grades to meet demand, while others experienced a surplus of certain grades. There was more talk of suppliers pursuing export business in April, but no spot export business was confirmed early in the month. Meanwhile, international PP markets continued to soften in early April, with ample availability from the Mideast and Asia. Greenberg reported that spot PP demand showed a bit of improvement in the first week of April, though prices for both homopolymer and copolymer PP slid by another 2¢/lb—totaling a 6¢/lb drop in a five-week period and sending prices 2¢ lower than at the start of the year. His overall view on the market bouncing back: “It will be some time, but with early signs of improvement out of Italy, Spain, and U.S. COVID-19 hot spots, markets appear to see some sort of light at the end of this tunnel. Until then, we expect demand to be sporadic, with processors filling just-in-time needs and resellers shopping to position themselves for when manufacturing returns to more regular levels.”

Polystyrene prices stayed flat in March, but initial indications in April were for a fall of 7¢ to 9¢/lb, driven primarily by the $1.36/gal drop in April benzene contracts, according to PCW’s Barry and Robin Chesshier, RTi’s  v.p. of PE, PS and nylon 6 markets. In early April, spot benzene dropped to below 87¢/gal, the lowest level since 2009. By the end of April’s first week, the implied styrene cost based on a 30/70 ratio of spot ethylene/benzene was at 11.9¢/lb, down 14.6¢/lb from early March. 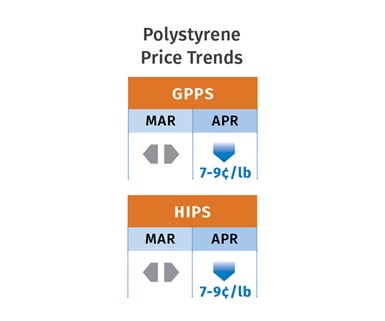 Chesshier saw both April and May as likely to see price concessions. Both industry pros noted that while we may not see a “renaissance” in PS demand, some of the industry talk was that consumers appreciate single-use plastics even more during the pandemic, and some communities have suspended their bans on PS foam containers. Barry reported that initial April reports indicated healthy PS demand, encouraged by lower prices. “The shift in the restaurant industry to takeout business was increasing the usage of PS foam containers; and disposable medical supplies such as testing kits and lab dishes were also an area of strong demand.”

PVC prices appeared to have remained flat through March, but a decrease in the range of 5¢ to 8¢/lb was expected in April and May, according to Mark Kallman, RTi’s v.p. of PVC and engineering resins and PCW senior editor Donna Todd.

Kallman noted that the significant drop in oil prices had driven the cost of ethylene and nearly all other feedstocks to record lows. Spot ethylene prices in March were under 10¢/lb at times, and late-settling February contract prices dropped another 2¢ to 24¢/lb. Much lower demand for exports resulted in a 5¢/lb price drop in export prices, a typical signal for impending lower domestic prices. Kallman says the virus outbreak resulted in a significant pullback in the construction market, though PVC demand in the food-related and medical markets was healthier. Both Kallman and Todd  had heard that processors were struggling to keep their facilities staffed amid spikes in coronavirus cases. 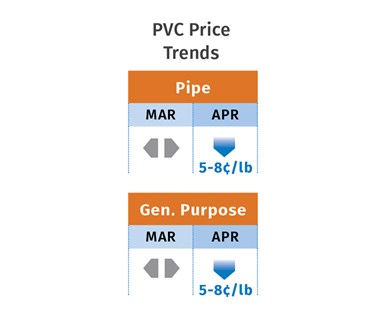 Todd reported that suppliers in March indicated that customers had begun canceling resin orders for April. And with buyers expecting lower PVC prices coming month, they opted to hold off on buying. She also noted that some PVC compounders said they expected to see a decrease in demand, so they had already pulled back on PVC orders.

PET prices started April in the mid-40¢/lb range for railcars delivered to the Midwest, holding steady from late March. PCW senior editor Xavier Cronin ventured that PET would be steady-to-slightly-lower through the rest of April, depending on the severity of the COVID-19 outbreak and how the U.S. economy recovers from its effects. In May, Cronin said that we could see PET prices plunge to historic lows, in step with key feedstocks, if oil prices continue to be “in the tank.” 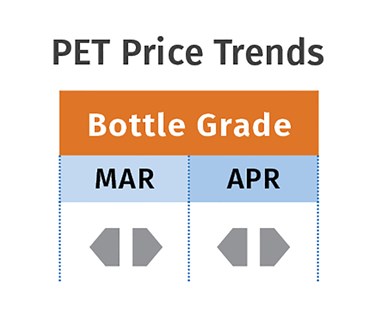 Demand from consumer-brand companies using PET for bottles, containers and packaging has slowed due to the COVID-19 outbreak and stay-at-home directives issued across the country. At the same time, demand for bottled water appeared to have skyrocketed; bottle producers had received strong orders since mid-March, Cronin noted. Meanwhile, PET imports from around the world continued strong through January, but February-March data was expected to show a drop due to restrictions in many ports around the world tied to the virus outbreak.