Prices for Nearly All Volume Resins Down

Volume resin prices, all of which eroded during much of the third quarter, were generally projected to be flat in the fourth quarter, except perhaps for downward pricing of PET and nylons 6 and 66. Major drivers include supply outstripping demand, a slowdown in some key markets such as automotive and construction, lower U.S. GDP, slowed global demand, and tariff-related issues.

Polyethylene prices generally dropped a total of 6¢/lb in June and July, though there appeared to be some trail-off into August, according to Mike Burns, RTi’s v.p. of PE markets and PCW senior editor David Barry. Suppliers moved back their July 3¢ increase to August and issued a new 4¢ increase for Sept. 1. These sources characterized these moves as primarily a “security” measure against disruptions from a major weather event and an attempt by suppliers to set a pricing floor, but noted that market fundamentals are not indicating a cost push. 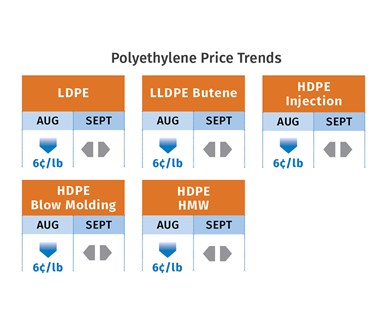 Said Burns, “Supplier inventories remain at record-high levels—all extra resin is moving to exports, which increased 20-35%, nearly on par with new PE capacity brought on stream. All industry sources describe domestic demand as pretty healthy, and anticipate that fourth-quarter PE prices may have found a temporary floor. Barry noted that China’s new tariffs scheduled for Sept. 1 include an additional 5% tariff on HDPE and LLDPE, while an additional 10% tariff on LDPE imports are scheduled for December.

Reporting on the PE spot market, The Plastic Exchange’s Greenberg described August as a very active month. “Processors continued to tap the spot market for favorable deals; the market has been very liquid and the savings substantial compared with general contract levels. All HDPE resins and LLDPE film grades were down a full penny as new reactors pump out these commodity resins, but premium LDPE Film was up at least a half cent, with a notable delay in new production. Both LDPE and LLDPE for injection gained a full penny, citing supply tightness in these slightly more specialty grades.”

Polypropylene prices in August rolled over from July, in step with propylene monomer contracts. However, spot monomer prices were moving up last month, and a modest increase of 1-2¢/lb was noted as possible by PCW’s Barry, the Plastics Exchange’s Greenberg, and Scott Newell, RTi’s v.p. of PP markets. Newell saw this as tied to a couple of supply blips, including a fire at one of ExxonMobil’s Baytown crackers, expected to be down through September, and Dow’s planned maintenance shutdown of its monomer plant for the month of September. 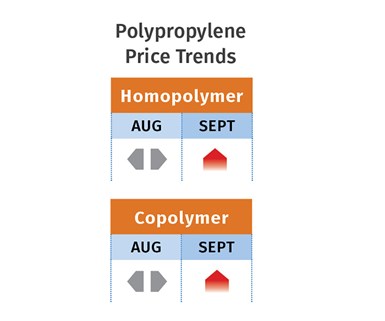 PCW’s Barry also thought a modest increase was possible, based on a lot of PP capacity being off line in Europe, which could strengthen exports there and prices on both continents. Still, Newell noted that both monomer and PP demand has been soft globally: “Almost all major PP markets show negative growth with exception of resellers and exports.” He characterized the domestic market as very well-supplied with a lot of material being pushed into secondary markets at heavy discounts. He thought processors should have a pretty good chance of getting lower contract prices, as suppliers have been jockeying for position as they head into 2020 contract negotiations.

Noted Greenberg, “As we enter a seasonally strong period of demand, it will be interesting to see if the apparent upstream resin supply tightness begins to impact spot availability, which has otherwise been quite good. “

Polystyrene prices dropped 1¢/lb in August in step with benzene contract prices, which fell to $2.54/gal., according to PCW’s Barry and Robin Chesshier, RTi’s v.p. of PE, PS and nylon 6 markets. Both sources expected PS prices to be flat. 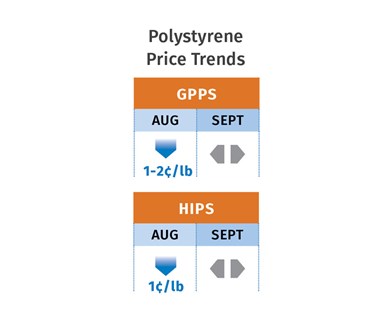 Barry noted that styrene monomer cost based on a 30/70 formula of spot ethylene/benzene was 29.4¢/lb, compared with 29.7¢/lb in July, and ventured that PS prices in October could be flat. He characterized supply/demand as balanced due to low plant operating rates. Chesshier saw some potential for upward PS pricing in October, noting that October benzene prices tend to move up as refineries switch from summer to winter fuels. She also noted that historically, September has been a peak season for PS demand in appliances, but that was not evident thus far. “Domestic PS demand was down 5% through July and operating rates that same month were less than 65%, year-to-year.”

PVC prices in August dropped 1¢/lb and were expected to fall another penny in September, essentially erasing the June 2¢/lb increase, according to both Mark Kallman, RTi’s v.p. of PVC and engineering resins, and PCW senior editor Donna Todd. Meanwhile, Todd reported that OxyVinyls announced a 3¢/lb hike, for Oct. 1. She noted that an Oxy representative attributed the move to an aim to recoup the August 1¢/lb decrease and to prevent the September 1¢/lb decrease. 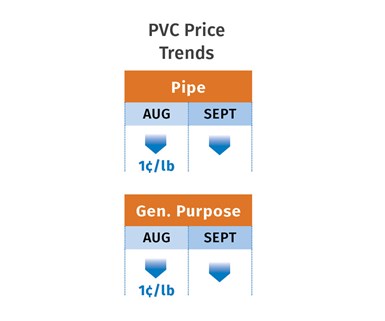 Kallman ventured that prices in October would be flat, noting that there are several downward pressures, including high supplier inventories, high operating rates, and weak demand, which dropped 2% in July. He also noted that exports are good but trade tariffs are not likely to let suppliers boost export prices, which would pressure domestic tabs.

PET prices were flat in August and dropped 1-2¢/lb at the start of September, hovering close to the low 50¢/lb range, according to  PCW senior editor Xavier Cronin. He attributed this to the ‘familiar dynamic’ seen this year of plentiful supply of domestic and imported resins. He ventured that October PET prices would sink slightly below 50¢/lb for prime PET and to the mid-40s for offgrade resins. Moreover, he ventured that these price ranges should level off until December when PET’s seasonal consumption slowdown kicks in, at which point, prices are likely to drop a few cents lower. This assumes there will be no supply/demand changes due to plant production disruptions, a sharp drop in imports, or unexpected end-user demand changes. 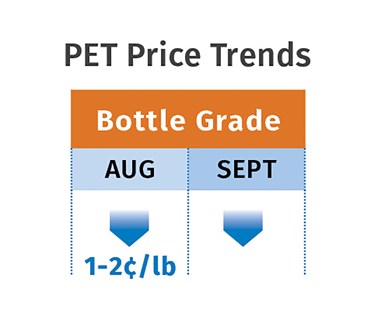 According to Cronin,in addition to the bloated supply outpacing demand, another downward pressure factor is falling costs for PET feedstocks, including PTA and MEG, especially for buyers with contract prices tied to raw-material contract prices as published in monthly indexes. He added, “The U.S. remains a coveted market for global PET producers and distributors due to typically good payment terms, the actual price paid for PET compared with other countries, and dependable logistics.”

ABS Prices Down to Flat

ABS prices eroded through much of the third quarter after remaining flat through most of the first and second quarters, according to RTi’s Kallman. Key drivers included a 2% drop in automotive sales for the first half of the year, coupled by continuation of well-priced imports. Based on a very well-supplied market and lower-cost imports, he expected ABS prices through the fourth quarter to remain mostly flat as 2020 contract negotiations take place.

PC Prices Down to Flat

Polycarbonate prices eroded in the first part of the third quarter following flat pricing through much of the second quarter and suppliers’ concessions of 8-10¢/lb in first-quarter contract settlements, according to RTi’s Kallman. “We’ve seen a pretty substantial increase in lower-cost imports—up 45% for the first half of 2019, primarily from Southeast Asia, due to tariffs, slowdown in automotive in China, and devaluation of the Yen.” He ventured that PC prices could remain relatively flat through the fourth quarter. While feedstock prices went up fractionally through the third quarter, they were stabilizing somewhat .

Nylon 6 prices were softer for the last half of the second quarter and most of the third after remaining flat in the first quarter, according to RTi’s Chesshier. Despite some benzene price fluctuations, there’s been no effect on the nylon 6 market because demand has been so off, domestically and globally. Domestic demand in 2019 is depressed by a slowdown in automotive as well as carpet fibers and textiles.” Imports for nylon 6 were down by 8% and exports were down by 9% through July. Typically, the September-October time frame has seen strong demand domestically and in Asia, but the tariffs and devaluation of the Yen were expected to dampen demand. “If demand moves higher and benzene prices move up, suppliers will have a strong opportunity to increase nylon 6 prices,” said Chesshier.

Nylon 66 prices have been dropping, generally 5% to 10%, starting in late May, and were expected to move further down in the third quarter and into the fourth, according to RTi’s Kallman. This despite modestly higher feedstock costs in the third quarter, but still lower than those in 2018. “Unlike last year, when price hikes were driven by tightness in raw materials, we now have a very well-supplied market. Demand is challenged by a slowdown in automotive demand and lower GDP, which impacts the construction market,” Kallman noted. The slowdown in automotive for the first half of 2019 is U.S., down 2%; Europe, down 3.1%, and China, down 12.4%.