Prices of Volume Resins Flat to Down

Prices of all volume commodity resins heading into April were expected to be mainly flat and in some cases lower. Factors for this softness include well-supplied markets, sluggish demand, lower global feedstock prices, and the effects of the coronavirus disrupting global production networks. The latter introduced a key element of uncertainty into industry sources’ projections for commodity resin pricing going into the second quarter.

These are the views of purchasing consultants from Resin Technology, Inc. (RTi), senior editors from Houston-based PetroChem Wire (PCW), and Michael Greenberg, CEO of The Plastics Exchange.

Polyethylene prices were flat in February and were projected to remain flat in both March and April, after suppliers implemented a 4¢/lb January increase. Mike Burns, RTi’s v.p. of PE markets, PCW senior editor David Barry, and The Plastic Exchange’s Greenberg all noted that most suppliers had delayed their February 4¢ increases to March, while two suppliers—Dow and ExxonMobil—notified customers of an additional late-February increase of 2¢/lb for LDPE. According to these sources, spot LDPE availability has been tight for several months due to unplanned shutdowns and delays of new capacity coming on stream. 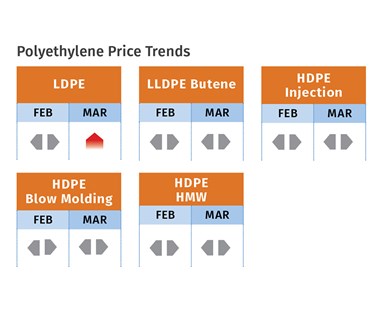 Still, these sources note that all key factors supporting an increase have reversed themselves—from lower global oil prices and feedstock costs to lower global PE prices and demand, and a significant drop in U.S. exports brought on by the uncertainty of the coronavirus. Greenberg reported that, given these developments, “Suppliers might be happy just to hang on to the 4¢/lb hike they achieved in January.” Noting that domestic demand continues to be good, Burns said, “The duration of the impact of the coronavirus will continue to be the main demand driver. Without global demand and export opportunity, inventories will continue to grow and outpace demand.” And Greenberg’s projection of flat pricing in March and April is coupled by downward pressure from spot-market prices and lack of export opportunities (40% of U.S. PE production typically goes to exports).

Barry noted that suppliers will have to throttle back production and/or reduce PE export prices, which they had yet to do in early March, in order to get export markets moving again. He thought that planned maintenance turnarounds in March and April would help reduce the supply glut. Burns doubted suppliers would throttle back production and expected them to seek every reason to hold onto the unexpected January price increase.

Polypropylene prices in February dropped 1¢/lb in step with propylene monomer and were expected to be flat or slightly lower in March and possibly into April, even though suppliers issued price increases. Those views were held by Scott Newell, RTi’s v.p. of PP markets, PCW’s Barry, and The Plastic Exchange’s Greenberg. Newell, for one, said an additional 1¢/lb drop was possible in March or April. All three noted that the coronavirus was creating uncertainty and supply disruptions and would likely impact global demand, in addition to existing lackluster domestic demand. 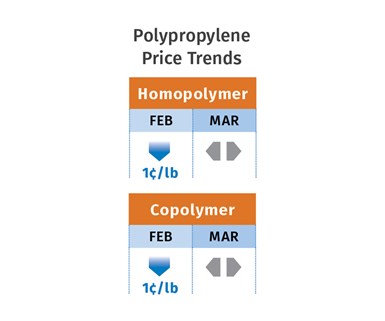 Several suppliers had posted 3-4¢/lb hikes for March 1, on top of any change in monomer pricing. Missing was ExxonMobil, which later issued an April 1 increase of 3¢/lb for PP homopolymers and random copolymers such as clarified grades, with no change in impact copolymer pricing. While PP contract buyers have had no problems in getting material, there has been a shortage in the spot market (and rising prices), particularly for homopolymer raffia (low-MFI grades) and random copolymer clarified grades. Barry saw this as a relatively short-term tightness and ventured that suppliers might actually inch prices up by 1-2¢/lb in March and April. While Greenberg envisioned a similar scenario, he noted that these PP margin increases have been hard for suppliers to secure in the past.

Newell noted that PP plant operating rates were below 80% for four months through February, and that despite planned and unplanned production interruptions, supplier inventories stood at a healthy 35.5 days of supply. He did not see the market fundamentals supporting any non-monomer-related increase.

Polystyrene prices in February were flat and were expected to remain so last month and possibly this month as well, owing to feedstock price cuts affected by the coronavirus, seasonally quiet demand and adequate supply, according to both PCW’s Barry and Robin Chesshier, RTi’s v.p. of PE, PS and nylon 6 markets. Barry, in fact, ventured that a 1¢/lb price concession was possible for March. March benzene contract prices dropped 7¢/gal to $2.57¢/gal but spot prices, in step with crude-oil prices, dropped from $2.69/gal to as low as $2.20/gal going into March. Styrene monomer prices were at a record low of 34¢, dropping another 2¢/lb by February’s end, and ethylene prices were also 2¢/lb lower, with further decreases likely last month. According to Barry, the implied styrene cost based on a 30/70 ratio of spot ethylene/benzene was at 25.7¢/lb, down 2.6¢ from the prior week and down 3.7¢ through February. 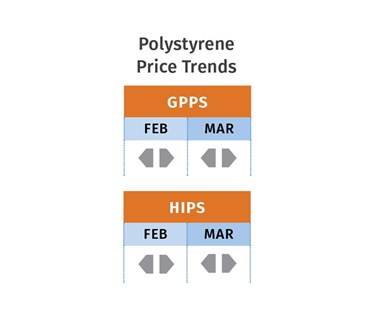 Chesshier indicated that buyers were asking suppliers to give back some of their January 3¢ increase, based on the same dynamics the suppliers had cited as justification for the increase—the price trajectories of benzene, ethylene and styrene. She said there was some potential for higher prices this month, as the traditional busy season for PS gets underway and plant production would likely be increased from the low 60% utilization rates through much of the first quarter. Said Barry, “I’m not sure that demand for PS, which is pretty static with no new applications developed, could swing prices upwards as there’s ample supply, even at low operating rates.”

PVC Prices Rise, Then Level Off

PVC prices moved up in February by 2¢ of the 3¢/lb sought by suppliers. This came after implementation of the January 3¢ hike, noted Mark Kallman, RTi’s v.p. of PVC and engineering resins.

PCW senior editor Donna Todd reported that the full implementation of the January increase was attributed by suppliers to PVC resin supply tightening up after planned and unplanned production shutdowns, which pushed export prices up and then pulled up domestic pricing as well. Still, both these sources noted that PVC processors had no difficulty getting the PVC they needed through February. 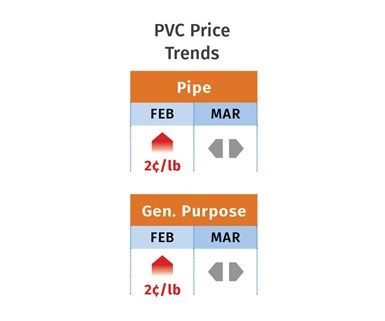 Kallman said PVC prices in March and April were likely to be flat, owing to lower ethylene costs and uncertainty over the coronavirus’s impact. He noted that while two more plant turnarounds are scheduled for the April-May timeframe, expanded new capacity would nix any further tightening. Seasonal demand for construction could result in upward pressure on pricing through the second quarter.

PET prices started March in the mid-40¢/lb range, delivered railcar to the Midwest, down 1¢/lb from the start of February. According to PCW senior editor Xavier Cronin, an abundant supply of imports from around the world has sustained a buyers' market. Cronin reported that March prices were expected to be mostly unchanged for monthly contract business for bottle resin delivered Midwest and U.S. South. He ventured that April could see an uptick of 2¢ to 5¢/lb for prime PET resin as the warm-weather season ushers in demand for single-use PET bottles and containers, especially for carbonated soft drinks and  water. 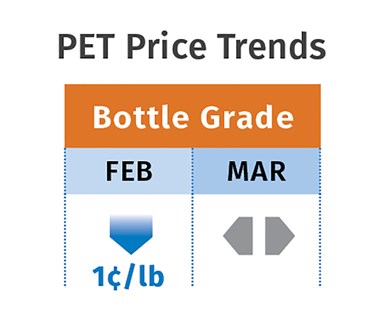 Consumer brand companies are under pressure to use more recycled PET in single-use bottles and containers for their products. But, noted Cronin, cheap, abundant virgin PET resin, including wide-spec, is keeping demand for recycle steady, even as brands try to blend more food-grade rPET pellet and flake into their production processes.

ABS Prices Flat to Down

ABS prices moved down 1-2¢/lb in January, remained flat in February, and were expected to drop another 1-2¢ in March, according to RTi’s Kallman. Lower benzene and styrene monomer prices and a very well-supplied market, plus low-priced imports, are likely to keep prices flat this month and most likely beyond.

Polycarbonate prices through most of the first quarter were generally flat, according to RTi’s Kallman. He noted that January saw some 2020 contract concessions on the order of under 5¢/lb, reflecting similar discounts some contract buyers secured in last year’s fourth quarter. He expected PC prices to remain flat into the second quarter, owing to a well-supplied market and attractively priced imports. A downward turn could come if domestic automotive production and sales are affected by the coronavirus, as has occurred in China and elsewhere.

Nylon 6 prices through much of the first quarter were largely stable, despite suppliers’ attempts to push through price hikes of 7¢/lb, according to RTi’s Chesshier. Moreover, due to ample supply and weak demand, suppliers reportedly offered some volume discounts in order to retain and/or gain market share. Based on short-term market indicators, nylon 6 prices were expected to be largely flat through the second quarter. Still, uncertainty about the effect of the coronavirus during a time of an oversupplied market makes it hard to predict price trends. Companies like BASF, Lanxess and Evonik all have nylon 6 production in China, where plants were said to be operating, but at much reduced rates.

Nylon 66 prices were mostly flat through much of the first quarter, though some 2020 contract concessions under 5¢/lb were given in January, reflecting similar discounts given to some processors in the fourth quarter, according to RTi’s Kallman. He saw the potential for  price concessions in April. driven by low oil and feedstock prices globally, a well-supplied market, and the possibility of prolonged coronavirus fallout.