The second quarter was on track, at press time, to close with prices of nearly all commodity volume resins flat or lower. PVC suppliers were attempting to implement an increase last month to replace a failed effort, and late-settling May propylene monomer contracts resulted in PP prices moving up, though that spike was expected to be short-lived.

These are the views of purchasing consultants from Resin Technology, Inc. (RTi), senior editors from Houston-based PetroChemWire (PCW), and CEO Michael Greenberg of The Plastics Exchange in Chicago.

Polyethylene prices were flat in May, having risen 3¢/lb in late April. Suppliers appeared to postpone a May 3¢/lb hike as they struggled to justify the earlier increase, according to Mike Burns, RTi’s v.p. of PE markets. In fact, the outlook for June and July was for flat to lower prices, according to both Burns and PCW senior editor David Barry. “Barring storm-related disruptions or some major global event, we could see more downward pricing impact through the third quarter,” said Barry.

Burns emphasized that every single price driver was pointing to a flat-to-downward market, ranging from oversupply to lower global feedstock prices. He noted that oil price surges would be the only factor to reverse this trajectory and expected price-increase attempts to dissolve, along with a good chance of the April 3¢ increases fading away.

The Plastic Exchange’s Greenberg reported, “With additional new capacity slated to come online, some buyers are already hoping for that increase to be peeled back in June, but producers will do their best to hold it and defend their progress.” 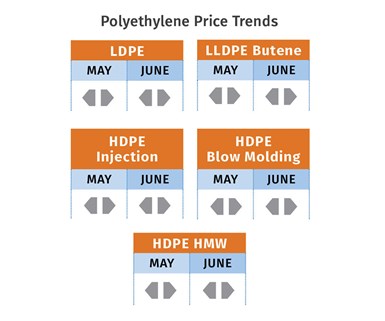 Greenberg characterized the spot market going into June as plentifully supplied. Spot PE prices were reported to have dropped 1¢∕lb, except LDPE film grades and LLDPE injection grades, which were flat.

Polypropylene prices increased by 4.5¢/lb in May, in step with propylene monomer contract prices which settled at 40¢/lb. Projections for June and July were for mostly flat pricing, with potential of slight movement down or up, according to both Scott Newell, RTi’s v.p. of PP markets, and PCW’s David Barry. Both Newell and Barry characterize the market as well supplied, owing to slower domestic and export sales, which were offset by some planned and unplanned production outages. 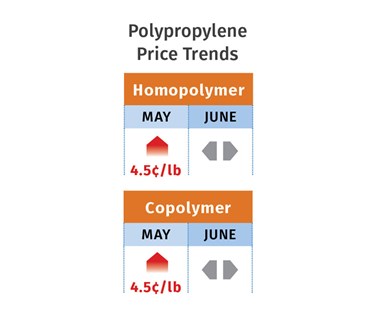 Newell and Barry also ventured that propylene monomer supplies should be in good shape, as maintenance season was coming to an end. Greenberg reported that spot monomer prices had eased by end of May, adding that spot PP prices dropped by 1¢∕lb. All three sources do not expect prices of PP, which will continue to follow the monomer, to rally back up to the high levels of past years. (From October 2018 to April 2019, PP prices dropped by nearly 25¢∕lb.) What’s more, domestic PP demand has been weak in all major market sectors. Says Newell, “This has switched from a seller’s market for the last three years to a buyer’s market.” Through April, domestic PP demand was down 1.2%, with total demand up 8% due to exports.

Polystyrene prices remained flat in May and were expected to remain so in June, with a downslide possible in July. This was after PS prices rose 2¢/lb in March and 2-4¢ in April, according to PCW’s David Barry and Robin Chesshier, RTi’s v.p. of PE, PS and nylon 6 markets. Said Chesshier, “July has more potential for some price relief, as buyers felt that a 4¢/lb price increase was too much. I think they will become more aggressive to get off at least the 2¢/lb that suppliers attributed to flooding conditions in the Midwest.” 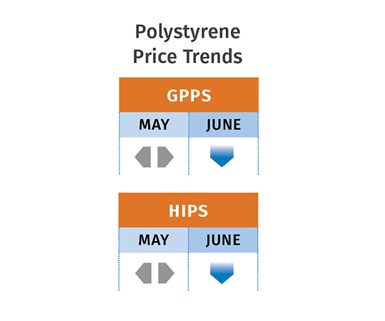 Chesshier noted that by end of April, supply was up 2% while demand was up only 1%, and exports for both monomer and PS were down by 17%.  Both she and Barry characterized PS seasonal demand as lackluster, noting that it’s not where it should be traditionally, with plants operating at 72% of capacity in April, after hitting an unprecedented below-70% mark in first quarter. According to Barry, the implied styrene cost based on a 30/70 formula of spot ethylene/benzene prices was up slightly at 26.1¢/lb as falling ethylene partly offset the benzene uptick.

PVC prices dropped 2¢/lb in April, nixing suppliers’ February increase, and were flat in May, but new 2¢/lb hikes emerged for June 1, according to Mark Kallman, RTi’s v.p. of PVC and engineering resins, and PCW senior editor Donna Todd. “There are a lot of balls in the air of what could drive the success of the new 2¢/lb increase,” said Kallman. He cited lower feedstock prices contrasted by the potential for increased demand following a slowed construction season, along with one major supplier’s planned June maintenance shutdown that could tighten supply. 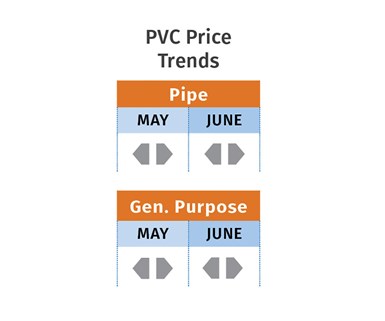 PCW’’s Todd noted that some buyers contended that the June price hike will not go through—at least fully. “While producers were talking about high resin demand and tight supply, buyers said that domestic demand has not been that hot so far this year and it was not all due to bad weather in the nation’s heartland, either. PCW said that if domestic and offshore demand was as strong as producers contend, they would have been able to achieve more price increases this year. Moreover, suppliers have not shared with resin buyers their fatter profit margins resulting from the 8.75¢/lb decrease in ethylene contract prices through April, with more expected, based on trending spot prices.

PET resin prices dropped 1¢/lb at the start of June, with imported PET available in the high 50¢/lb range delivered within 300 miles of ports on the West Coast, East Coast and in the Midwest. Domestic PET was 1-4¢/lb higher (60-63¢/lb range) for railcar business tied to monthly contracts using feedstock costs as the pricing basis. 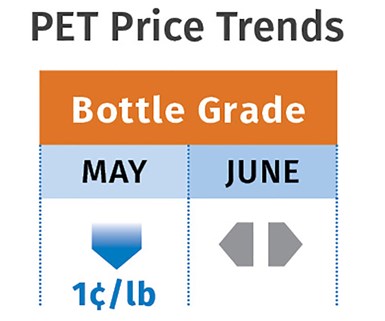 A surplus of PET imports and globally lower prices for feedstock paraxylene were the major reasons for lower PET prices through much of the second quarter, according to PCW senior editor Xavier Cronin. He noted that market sources expect domestic prices to stagnate at current levels through June and possibly into July, despite increasing demand for PET from bottle makers in the high-consumption summer season. “This, again, is the result of supply outpacing demand and lower prices for feedstocks,” Cronin noted.

ABS prices remained flat through most of the second quarter, as in the first quarter, and this month was likely to follow, according to RTi’s Kallman. Key drivers include domestic demand that has been flat-to-down from all key market sectors, and the imports factor. Prices in May stood at very competitive levels due to the escalation of trade conflicts. “Countries like Taiwan and Korea are looking to cut production rates, as their margins are very low. Spot ABS import prices are already quite low. Recovery of the domestic ABS market will depend on resolution of the trade war,” explained Kallman.

Polycarbonate prices were flat through much of the second quarter, following suppliers’ concessions of 8-10¢/lb in first-quarter contract settlements, according to RTi’s Kallman. He ventured that this trajectory would continue, despite some increases in feedstock costs, which have remained well below 2018 levels. Weaker domestic automotive demand and a late start to the construction season signaled some potential for further price concessions, but inching up of feedstock prices could serve to keep prices stable.

Nylon 6 prices rolled over in April, having remained flat through first quarter, according to RTi’s Chesshier, who had projected as much, including a move by suppliers to increase prices in April. Suppliers issued increases of 6¢/lb, attributing the move largely to the temporary climb of benzene prices, but there was strong resistance from buyers. This was because benzene prices eased off and also due to resin oversupply. A key reason for the latter is relatively weak demand from the automotive sector, which has not rallied all year. Yet another factor was a nearly 17% increase in availability of well-priced European imports.

Nylon 66 prices remained largely flat through the first two months of the second quarter, as they had during the first, following the 2018 increases of 25-40¢/lb that were driven by globally tight supply of nylon 66 intermediates. RTi’s Kallman characterizes the market as much more balanced, the result of a 10-month global softening in demand in the automotive sector coupled by incremental improvements in the supply chain.