Global supply constraints on feedstocks and some resins, along with strong demand, are driving continued increases.
#resinpricing #Elastomers

Prices of PE and PP moved up in double-digits, while those of PS, PVC and PET were also on an upward trajectory, in the first six weeks of this year. The remainder of the first quarter was projected to continue on this track, owing to global constraints on feedstocks and some resins, coupled by continued strong demand in most cases. Those are the views of purchasing consultants from Resin Technology, Inc. (RTi), senior editors from PetroChemWire (PCW,), and CEO Michael Greenberg of The Plastics Exchange.

Polyethylene prices rose 6¢/lb following the December 5¢ increase, and suppliers announced a 7¢ increase for February, according to Mike Burns, RTi’s vp of PE markets, PCW senior editor David Barry, and The Plastic Exchange’s Michael Greenberg. Said Burns, “Prices are now 30¢/lb higher than they were in December 2019, without any significant cost increases to produce polyethylene.”

These sources anticipated that the past month’s 7¢ increase had strong potential of being implemented, attributing the increases to tight inventories that have resulted from both planned and unplanned shutdowns and strong domestic and export demand, particularly to Latin America and Mexico. Supply is especially tight for HPDE and LDPE, due to the outage of Braskem Idesa’s large Mexican plant, explained Barry. While the plant was back up and running at 15% of capacity, it was unlikely to make a difference in the supply shortage until April. 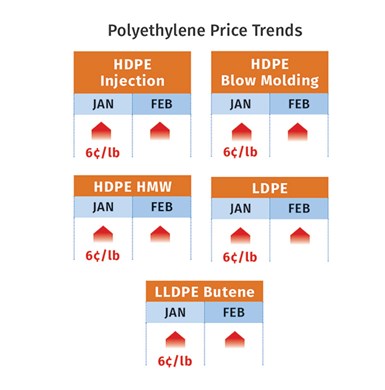 Meanwhile, prices of spot PE were at prime material levels. Burns predicted that demand will be strong through the first quarter and perhaps into second quarter, while supply will remain tight; and he did not expect much price relief till the second half of the year.  PCW’s Barry noted that some processors who had bought  heavily during December and January were positioned to cut back on orders last month and perhaps into this one. Spot availability was limited in the domestic resale market, and most offers were being quoted with the 7¢/lb February increase and a rollback provision.

Going into the second week of February, Greenberg characterized spot resin trading as hyperactive. “Processors, many on supply allocation, have flocked to the spot market as they scramble to procure material. This has resulted in very high volumes of resin changing hands through our trading desk and buyers’ resilience continued to astonish even as prices spiraled ever upward.” He noted that spot gains so far this year were 11¢ to 19¢/lb, depending on scarcity of the grade.

Polypropylene prices moved up 12¢/lb in January, in step with propylene monomer, which settled at 60.5¢/lb. Yet another double-digit increase was expected for the monomer last month, along with  a 6¢/lb margin increase sought by PP suppliers, according to Scott Newell, RTi’s vp of PP markets and PCW’s Barry. Newell expected that suppliers would succeed with the margin increase. Barry also reported that LyondellBasell issued a 6¢/lb hike for March, in addition to any change in the monomer.

Newell, Barry and Greenberg all noted that these increases are primarily feedstock driven. Newell ventured that the monomer tightness would continue, as inventories had yet to be rebuilt following several outages in the last half of 2020. Despite very strong current PP demand, all three sources expected demand destruction to follow, though it has not occured to the degree originally thought. “We’re seeing increasing imports of propylene, PP pellets and finished goods like BOPP film,” Newell said. “Imported PP is priced better than domestic resin, even with the higher freight costs.” Barry noted that the spread between U.S. and Asian market pricing was approaching 40¢/lb. 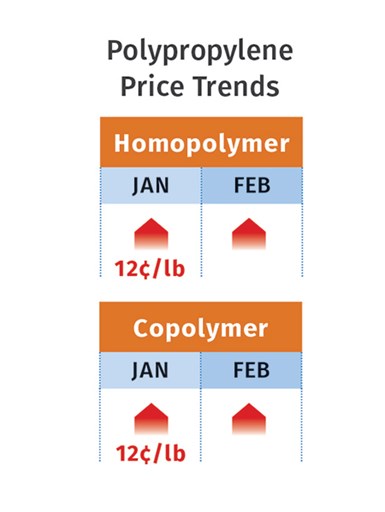 Greenberg reported that PP spot prices were up 17¢/lb in January and gained another 10¢/lb in the first week of February.

He said, “Though the price stings, demand has remained good, and it has been easy to find homes for the slightly improved flow of spot offerings. We are undoubtedly seeing demand destruction too, but to date it has been overshadowed by the high level of inelastic demand chasing limited resin supplies.”

Polystyrene prices moved up 5¢/lb in January, following the December 6¢ hike, driven this time by increased costs of benzene, ethylene and styrene monomer, according to both PCW’S Barry and Robin Chesshier, RTi’s vp of PE, PS and nylon 6 markets. Moreover, suppliers were looking to implement a 2¢/lb price hike in February, based on higher ethylene costs. January ethylene contracts settled 6.5¢ higher at 37.75¢/lb. Barry reported that the implied styrene cost based on a 30/70 ratio of spot ethylene/benzene by the end of the first week of February was at 33.8¢/lb, 2.7¢/lb above the previous four weeks. 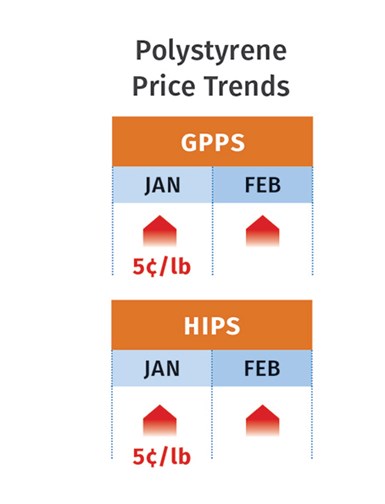 Chesshier said current market dynamics did not justify the February increase, noting that spot benzene prices were dropping and that the higher domestic prices were the result of tightness, particularly in Asia, due to planned and unplanned plant shutdowns. “Domestic demand is down 3% as are supplier inventories, but PS export sales are up 70%—a very unusual occurrence. So, North American processors are paying higher prices while suppliers export material at lower prices.” Similarly, Barry noted that a global styrene shortage has resulted in domestic suppliers exporting monomer at a profit, while tightening domestic availability. Both sources noted tighter domestic PS supplies and ventured that prices in March and early April had potential to move up further, depending on benzene supplies and cost and PS export demand. “We’re not out of the woods in terms of further price increases through the first two quarters,” summed up Chesshier.

PVC resins prices rose 4¢/lb in January and suppliers issued a 3¢/lb hike for February that was likely to be implemented at least partially, according to RTi’s Kallman and PCW senior editor Donna Todd. Kallman characterized demand as strong, noting that housing starts are up and the home renovation business continues to be strong, facilitating demand for products such as PVC flooring. 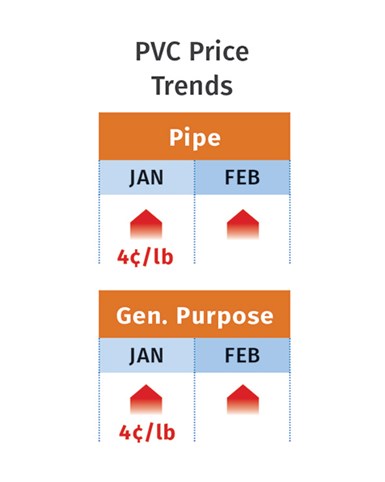 According to Kallman, March could prove tougher in terms of supply tightness, since plant maintenance shutdowns are scheduled. Todd reported that all four domestic PVC suppliers were building inventory ahead of their upcoming plant turnarounds. “Lack of product has kept export PVC prices above domestic prices. Looking at rising ethylene costs, tight resin availability and high export prices, some converters believe that producers will announce another PVC price increase for March.”

Still, Kallman noted that export prices were going down 3-4¢/lb. “This was an early indication going into February that supply tightness was loosening up a bit. There is no doubt that this upwards pricing is really about supply/demand imbalance, not feedstock prices.”

PET prices for spot railcars and truckloads started February steady from late January in the high-50¢/lb range, delivered to the U.S. Midwest and South. That was up from 50-55¢/lb in early January, according to PCW senior editor Xavier Cronin. Monthly contract business tied to PET feedstock indexes for February delivery stood between 52¢ and 56¢/lb delivered. Offgrade PET availability was limited due to the high availability of on-spec resin from domestic sources and imports. 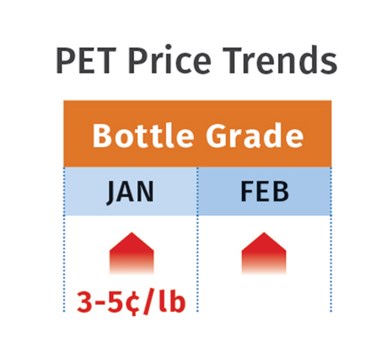 Cronin ventured that PET prices would hit 60¢/lb by mid-February and would be higher than that in March, given robust demand for PET bottles, containers, packaging and strapping. “Demand typically falls during winter months, but has not done so this year due to COVID-related demand for all kinds of plastics.”