Rising Prices for PE, PVC; Others Flat to Down

A reversal of the rising price curve for PP, PS, PET.
#resinpricing

The trajectory of prices of the five volume commodity resins was upward through September; but starting last month, a reversal was underway for most of these resins, possibly excepting PE and PVC. Factors in the continued flat-to-downward trajectory for PP, PS and PET included expectations of improved supply availability, lower feedstock prices, slowed seasonal demand, and loss of export opportunities due to higher prices. Factors maintaining strong pricing for PE and PVC, at least in the short term, included strong demand and tight monomer and polymer supplies brought on by planned and unplanned production shutdowns.

PE Prices up for Remainder of 2020

Mike Burns, RTi’s v.p. of PE markets, held that PE prices would stay firm, with the October hike—if not implemented right away—hanging over discussions with customers for the remainder of the year, due to sustained demand and tight inventories. PCW’s senior editor David Barry said he would not be surprised if suppliers stuck to their increases, but expected processors would have better leverage this month and in December in the negotiation of 2021 contracts. With the exception of HDPE blow molding grades, where a real shortage occurred, processors were able to get what they needed, but went through it faster than anticipated, noted Burns. 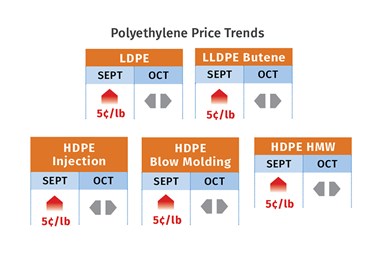 Both Burns and Barry ventured that a slow recovery of tight resin inventories was already underway at the start of the fourth quarter, which ought to help ease price pressure in first quarter of 2021. Going into October, The Plastic Exchange’s Greenberg reported that while demand for spot PE had been good, processors generally opted for just single truckloads, and a whisper of uncertainty had crept into the market. “The fourth quarter often brings softer demand and could provide the market an opportunity to rebalance especially when downed plants return fully online and new reactors begin production,” he commented.

PP Prices Up, Then Flat to Down

Polypropylene prices moved up 3¢/lb in September, despite stability in propylene monomer contract prices, which remained at August’s 36¢/lb level. Moreover, PP suppliers announced another 3¢/lb “profit-margin increase” for October, a move that looked to be at least partially successful due to tight supply and some rebound in domestic demand, according to Scott Newell, RTi’s v.p. of PP markets, as well as PCW’s Barry, and The Plastic Exchange’s Greenberg. All three saw the recent upward trajectory halting, if not reversing.

Newell ventured that suppliers’ attempted margin expansions in September and October would erode between mid-month and December. “Suppliers have had leverage all this time owing to unplanned and planned monomer and PP outages, and low capacity utilization overall (around 83%). But the longer buyers can wait to order for 2021, the better. I expect quite a few pounds of PP and monomer capacity to be brought on stream in that time frame.” 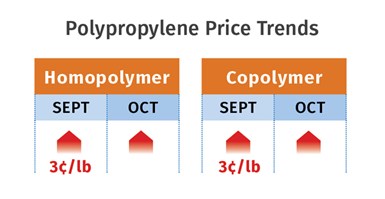 PCW’s Barry reported that while suppliers were seeking to boost their margins further in October, there were already signs that high PP prices were crimping demand for price-sensitive products such as PP tubs and totes, which depend heavily on “big-box” retail channels. He cited factors such as slower demand, rising PP imports and improving operating rates in the fourth quarter that could bring a turnabout in the PP supply situation in late November into December.

Reporting that spot PP demand was strong, supply was scarce, and prices were holding steady, Greenberg noted, “Our outlook has been moving from bullish back towards neutral as we feel there is some froth in spot pricing; still, industry inventories are at a historically low level and need to be rebuilt from a deep trough.”

PS Prices Flat to Down

Polystyrene prices were flat in September and expected to be flat in October, with downward pricing pressure mounting this month. After July/August hikes totaled 5¢/lb, Robin Chesshier, RTi’s  v.p. of PE, PS and nylon 6 markets, predicted that lower prices are in the offing, perhaps dipping 1-3¢/lb before year’s end. Chesshier cited poor domestic demand, which never rebounded after the 12¢/lb decrease in April/May, along with falling prices of feedstocks.

PCW’s Barry reported that PS prime market prices were stable going into October with the trajectory a bit unclear. He ventured that the market could hold steady through fourth quarter based on the lack of significant feedstock cost pressures. The implied styrene cost based on a 30/70 ratio of spot ethylene/benzene was at 19.75¢/lb, down slightly from 21.1¢/lb at September’s end.  Spot PS prices were mostly steady. He also noted that continued demand for styrene monomer exports could support a price hike for PS before year’s end, but  slow seasonal domestic demand for PS would work against such a move.

PVC tabs in September moved up by 5¢/lb, the result of an initial 3¢ hike increase and a 5¢ hike announced later in the same month. Suppliers also issued a 4¢/lb October increase, though both PCW senior editor Donna Todd and Mark Kallman, RTi’s v.p. of PVC and engineering resins, doubted its full implementation. Still, these sources anticipated that the remaining 3¢ of the second September increase would eventually take hold. “I think the 4¢/lb price hike might be a stretch. Still, suppliers have leverage,” said Kallman. He cited a very tight market, a robust increase in demand from construction, significantly higher export prices, much lower availability, and the late-settling September ethylene contract price increase of 3.5¢/lb, which added 1.6¢/lb to the cost of producing PVC. Kallman expected that November would see significant recovery in PVC supply, and prices could be flat for the remainder of the year. 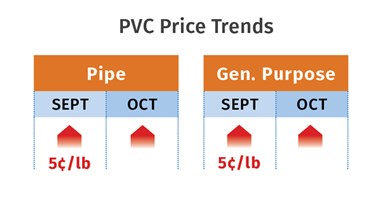 PCW’s Todd reported that PVC production remained problematic for three of the four main suppliers, with Shintech the only one operating at full rates at the start of October. Westlake’s Lake Charles, La., site had regained electricity following a Hurricane Laura outage, but market watchers thought it would take the entire month for the company to build enough PVC inventory to rescind its force majeure declaration. Formosa cited unexpected difficulties at its Point Comfort, Texas, plant that interfered with production of its specialty PVC. Formosa declared force majeure in early October, and also cited an upcoming government-mandated 30-day shutdown of the plant in the near future. Oxy was allocating resin to its customers, due to feedstock production difficulties at Pasadena, Texas.

PET monthly contract business started October at 45-48¢/lb for railcars delivered U.S. Midwest and South—steady from early September. Prices were expected to fall 2¢ to 5¢ this month as overall demand for PET bottles and containers sags during the colder weather, according to PCW senior editor Xavier Cronin.

At the same time, demand for PET bottles and containers related to the COVID-19 pandemic remains strong. This is due to purchases of bottled water and carbonated soft drinks at retail outlets and by governments and non-profit agencies for emergency use and other needs, like supplying water to essential workers. 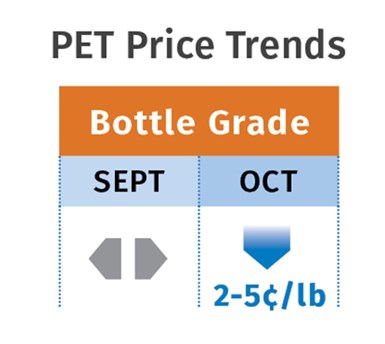 In recycled PET, Cronin reported that several veteran purchasers at U.S. PET recyclers say they have never seen demand for PET bottles/containers as strong as it has been since March.