Polywood Inc. in Edison, N.J., uses mixed recycled plastics to make fiber-reinforced structural profiles for railroad ties, I-beams, and decks. What’s unusual is that it doesn’t add any fiber reinforcements but creates them inside the profiles during the extrusion process.

Polywood didn’t invent this. In the late 1980s, a Ph.D. student at Rutgers University in Piscataway, N.J., discovered that extruding incompatible blends of polystyrene and polyethylene in the right proportions creates a co-continuous blend of matrix resin reinforced with intertwined fibers. This in-situ composite can have astonishing compressive strength. The effect is produced by mixing 20% to 35% of a high-melt-strength PS with curbside recycled HDPE. 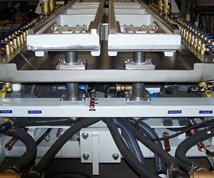 Expanding Profile Extrusion Capacity? Might Be Time to 'Go Dual'

Rutgers patented its immiscible polymer-blend extrusion process and tried to commercialize it in cooperation with a company that later became U.S. Plastic Lumber. But by the late 1990s, that relationship had ended in litigation. Then James Kerstein, a local entrepreneur, heard about the process.

Kerstein had just sold his previous business, Plaza Plastics Corp., an injection molder of plastic hangers. The immiscible polymer technology intrigued him. “I’m not an engineer, but I couldn’t see why this wouldn’t work,” Kerstein recalls.

He raised capital from friends, relatives, and the sale of his hanger business and bought used equipment to make plastic lumber. He obtained a broad, exclusive license on Rutgers’ technology for the life of the patent, which extends to 2011. He also got an interest-free loan of $250,000 from the New Jersey Commission for Science and Technology and invested it in more R&D at Rutgers to qualify the PE/PS composite for railroad ties. One of Kerstein’s suppliers of recycled HDPE also supported the R&D. Kerstein’s new company, Polywood, eventually patented its use of the unfilled PE/PS composite for railroad ties and has patents pending on other applications.

Polywood can make 35 million lb/yr of PE/PS composites. PE/PS ties behave differently from wood. When new wood ties are installed in a rail bed of crushed rock, trains passing over the ties press the ties into the rock, creating dents that lock the ties in place. Plastic ties, however, don’t dent so readily. So Polywood embosses the sides and bottom of its ties with dimples to give the rocks a grip.

Oddly, the mechanical properties of Polywood’s ties have been shown to improve over time. Compressive modulus for a Polywood tie is 2600 psi when new and 3100 psi after 20 years’ simulated aging. New wood ties start at 3200 psi and drop to 1000 psi after aging.

Polywood makes its ties by compounding HDPE and PS in-line with two types of intrusion molding. Its original intrusion lines are two Davis-Standard extruders, piped and manifolded to fill molds for different parts at the same time. Polywood later added two carousel intrusion molding lines from A.R.T. in Belgium. These fill closed molds at 400 to 500 lb/hr and rotate them into a cooling-water tank.

The two newest lines are not for intrusion molding, but rather for continuous compounding and extrusion of profiles up to 12 in. square. Each line can extrude eight 7 x 9 in. railroad ties per hour. The profiles are cooled in a 6-ft calibrator with water and glycol fluid at 30 F to freeze the profile surface rapidly. This gives the ties good stiffness. The profile then goes through two 30-ft water-spray cooling tanks separated by 5-ft air gaps. Next, the profile surface is reheated and embossed with dimples. Finally, the profile is cut and immersed in a water tank to cool for a couple of hours. The core is slightly foamed, which keeps spikes from splitting the ties later.

Polywood uses two formulations: one high in PS and stiffer because it has a higher fiber content, the other high in HDPE and less rigid, used in industrial pallets and decking. The HDPE matrix resin melts at a lower temperature than the PS, so the PS is still solid but above its glass-transition temperature. That causes the PS to be pulled into interlocking fibers with a mean diameter of about 15 microns and aspect ratio of at least 8:1, according to Rutgers’ patent (U.S. No. 5,298,214).

After testing by six research institutes, Polywood’s RR ties were qualified in 2000 by the Chicago Transit Authority for embedded and elevated track. The CTA has since installed the ties in 10 to 15 miles of track.