A thermoplastic composite sheet has replaced a thermoset composite in the production of next-generation loudspeaker cone assemblies by Dr. Kurt Müller (DMS), an over 70-year-old, Germany-based international manufacturer of acoustic components for all types of applications. The core business of DMS is in loudspeaker components and it is always looking for new materials to optimize the sound of loudspeakers.

For its latest cone assembly, DKM selected Stylight carbon-fiber reinforced SAN from Ineos Styrolution as the material for new acoustic membranes for cones, domes and dust caps in automotive as well as high-end speakers. Ineos Styrolution delivers the Stylight in sheet form to DMS. The sheets are heated to melt the thermoplastic matrix and make it formable by compression molding. 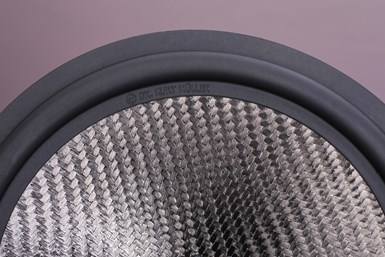 Previously, the company used dry carbon fabrics impregnated with epoxy resins, followed by autoclave processing with very long cycle times. Due to the processing properties of Stylight, DKM was able to achieve cycle times below 1 minute/piece, which allowed for a huge increase in output.

DKM was able to achieve cycle times of below 1 min/piece.

Further, due to the high demands on uniform thickness and properties of the final cones, the yield is drastically improved. “The previous thermoset system was by far not a match for the new thermoplastic method, whereby the fibers are already safely embedded in the matrix,” says Matthias Ringpfeil, DKM technical director .

Ringpfeil adds, “When we explored the new Stylight material, it initially convinced us with its look. However, when we analyzed its acoustic properties, we were even more convinced that we had found the material of choice for our new 6-in. carbon cone assembly. This has been confirmed by our long-term loudspeaker customers and we received immediately the first commercial orders.”

The Stylight Aesthetic S C245 carbon sheet is based on a modified SAN matrix that is said to ensure an aesthetic surface and extremely high mechanical performance. Since its launch at the K 2016 trade show in Düsseldorf, Germany, where it was dubbed the “first styrenic composite,” Stylight has won acceptance for demanding automotive interior and exterior panels, seat structures, door modules, center consoles, tailgates, and parts with a carbon-fiber look.

Stylight has also made inroads into other industries, including electronics, sports/ leisure, and now for the first time in home entertainment, according to Ineos Styrolution’s composites business development manager, Andreas Kolf.û