How—and when—cellulose-based chemistry led to the discovery of cellophane.
#Elastomers

Cellulose-based chemistry was one of the principal foundations for the birth of the polymer industry. But as we have discussed previously, the initial compounds based on cellulose nitrate were highly flammable and even explosive, limiting their use. As chemists discovered solutions for these problems, it expanded the use of this chemistry and the forms in which the material could be used. One of these substances that had an immense impact in the first half of the 20th century was cellophane.

The inspiration for cellophane came from a Swiss chemist, Jacques Brandenberger. As the story goes, while dining in a restaurant in 1900, Brandenberger observed spilled red wine staining a white tablecloth and began to think about developing a protective coating. The resulting material was based on cellulose chemistry and made use of an advance that had come in 1892 when Charles Cross and Edward Bevan reacted wood cellulose with caustic soda and carbon disulfide to produce a golden viscous liquid that became known as viscose. While early work with the material produced articles similar to those made from Celluloid, like combs and handles, Cross and Bevan focused on making a useful fiber for the textile industry.

Initial experiments produced a fiber that was too brittle to provide a useful substitute for natural fibers. However, through a series of fortunate accidents it was discovered that the viscosity of the material increased over time, a process that became known as ripening. This resulted in a much stronger and ductile product that could be readily spun and later became known as rayon. But this form of rayon, known as cellulose xanthate, was far less flammable that the cellulose nitrate that was used to make the “mother-in-law silk” that we mentioned in Part 3 of this series.

It was viscose that Brandenberger chose as the material for coating cotton fabric to make it stain resistant. He also encountered the problems with a structure that was very stiff and brittle. Over a period of several years, he worked on making thinner films of the cellulose xanthate, with the ultimate result being what he called cellophane. By 1913, Brandenberger had decided that making the film provided a better business opportunity than producing a fabric coating, and he had developed a machine that could produce long sections of the transparent film in the desired thickness. 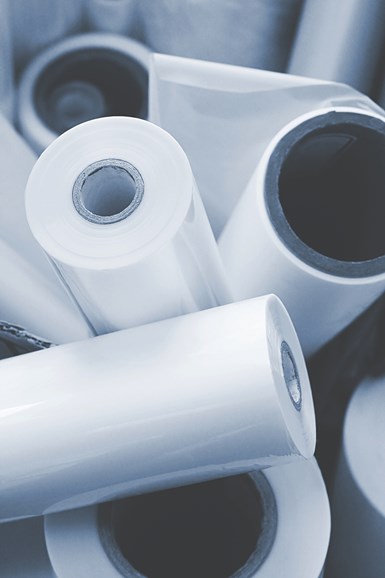 One material that made a huge impact in the first half of teh 20th century was cellophane.

Well aware of the flammability problems associated with celluloid film for cinematic use, Brandenberger first sought to replace celluloid in this market with his cellophane. However, he soon discovered that cellophane distorted badly at elevated temperatures and was too tough to allow for the formation of precise sprocket holes in the film.

But cellophane turned out to be the ideal wrapping material. Transparent, lightweight, and tough, it was far superior to either of the commonly used wrapping materials of the time, gelatin and tin foil. Initial products wrapped in cellophane were perfumes, bars of soap and toothpastes. Brandenberger’s objective was to target the food industry, but World War I diverted much production to gas masks due to the impermeability of the material to poison gas, the new weapon of mass destruction. It was also used as a transparent surgical dressing for wounds.

Transparent, lightweight, and tough, cellophane was far superior to either of the commonly used wrapping materials of the time, gelatin and tin foil.

After World War I ended, efforts to expand the consumer market resumed. Whitman’s Chocolates had already adopted cellophane as a wrapping material for some of its chocolates in 1912, but as the use of the material expanded to baked goods and products like tobacco in the early 1920’s, it became apparent that while cellophane was an excellent barrier against poison gas, it was not a good moisture barrier.

During this interval, the French company started by Brandenberger sold the rights to cellophane to DuPont, and it was a chemist at DuPont that developed the solution to the moisture-barrier problem. William Hale Charch created a coating based, ironically, on nitrocellulose. It also incorporated a plasticizer to tailor the properties of the coating, and a wax that contributed to the moisture barrier. This development, completed in 1927, took three years and was the beginning of a long history of chemical innovation to come out of DuPont. Once the moisture-barrier problem had been solved, cellophane use skyrocketed, making it one of DuPont’s most successful and well-known products.

During this same time period, another form of chemically modified cellulose was laying the groundwork for the development of one of the early thermoplastics. Cellulose acetate had first been synthesized in 1865 by the French chemist Paul Schutzenberger, who reacted cellulose with acetic anhydride. While cellulose acetate is fundamentally a thermoplastic, it would not have been melt processable since its decomposition temperature is lower than its softening point. However, soluble forms of cellulose acetate were developed in 1903 by German chemists Arthur Eichengrun and Theodore Becker when they discovered that the material would dissolve in acetone.

A year later, two brothers, Camille and Henri Dreyfus, began work in a laboratory in Basel, Switzerland. Their attention turned to cellulose acetate and they developed a film that became the less flammable substitute for celluloid film that cellophane had failed to provide. They also created a lacquer known as dope that was used to coat the cloth-and-wood airplanes of the time, making them resistant to the effects of moisture and fire. In 1913, just as the process for making cellophane was being perfected, the Dreyfus brothers established the Cellonit Company to make both their film and the lacquers based on cellulose acetate.

Clear screw driver handles to this day are molded from CAB.

They had just begun to develop a process for making a fiber from acetate when World War I diverted all of their efforts to making the cellulose acetate lacquers. They established a plant in Derbyshire, England for this purpose. During the war, Camille Dreyfus went to the United States at the request of the U.S. government to establish a cellulose factory. After the war ended, the Dreyfus brothers resumed their development of an acetate fiber that they called celanese, and the name of the British company was changed to British Celanese in 1923. In 1927, the American company Dreyfus had established, Amcelle, purchased the Celluloid Company of Newark, New Jersey and the company was renamed the Celanese Corporation of America.

In 1931 a melt-processable version of cellulose acetate was developed at Celanese by incorporating the same class of chemicals as plasticizers that Waldo Semon had used five years earlier to solve processing problems with PVC. In the same year it was discovered that by replacing most of the acetic anhydride with propionic acid it was possible to make cellulose acetate propionate (CAP), a compound that was more impact resistant and required less plasticizer in order to make it melt processable. Further improvements were made in 1938 when butyric acid was used in the reaction to produce cellulose acetate butyrate (CAB). This material not only exhibited improved toughness, but had heat resistance superior to that of CA and CAP.

Celanese has had a long and rich history in the world of polymers, and a couple of grades of cellulose acetate are still included among its offerings. But the company that maintains a broad offering in cellulosics bears the name of another pioneer from the era of early cellulose development, Eastman. Perhaps the best-known application that continues to this day is the clear screwdriver handle.

But cellulosics remain an important contributor to the world of coatings, paints, and lacquers. The materials are used in fiber form for clothing and drapes and it are the materials of choice for cigarette filters. Eyeglass frames are still made of cellulosics. In a less performance-based vein, award ribbons are almost exclusively made of cellulose acetate, and many playing cards still use the material. Lego bricks, now produced from ABS, were originally molded from cellulose acetate. And for those who are still doing presentations on an overhead projector, you are likely using a cellulose-based material for your slides.

Cellulosics have lost much of their market share to other materials. Cellophane was largely replaced by polyethylene, polypropylene, PVC, and polyvinylidene chloride (PVdC), another polymer discovered by accident in the early 1930s, this time at Dow Chemical. Cellulose acetate fiber was superseded by nylon and polyester. Interestingly, now that the plastics industry is focusing on sustainability and a circular economy, a polymer that can be derived from anything that contains cellulose is beginning to garner a new level of attention. In an era when researchers are trying to make polymers out of anything that has a biological pedigree, it will be interesting to see if we return to our roots.

In the same year that William Hale Charch solved the cellophane moisture-barrier problem, another chemist was hired by DuPont to conduct basic materials research. He would lead a team that would eventually develop the chemistry associated with the first legitimate engineering thermoplastic. That part of the story will be the subject of our next installment.

ABOUT THE AUTHOR: Michael Sepe is an independent materials and processing consultant based in Sedona, Ariz., with clients throughout North America, Europe, and Asia. He has more than 45 years of experience in the plastics industry and assists clients with material selection, designing for manufacturability, process optimization, troubleshooting, and failure analysis. Contact: (928) 203-0408 •mike@thematerialanalyst.com