Trexel, Inc., Wilmington, Mass., a long-time proponent of physical foaming with its MuCell direct gas-injection process, has now added chemical foaming to its microcellular technology portfolio. Trexel has partnered with masterbatch producer Polyfil Corp., Rockaway, N.J., which has offered EcoCell blowing-agent concentrates since 2009. Polyfil’s patented technology uses 0.08-micron nanoparticles of calcium carbonate in an endothermic reaction that yields only carbon dioxide, water, and citric salts, whereas most endothermic chemical foaming agents (CFAs) reportedly also produce soda ash, which can cause plateout and corrosion. Besides being a “cleaner” reaction, EcoCell is said to produce smaller cell sizes and more uniform cell distribution. Trexel describes it as a microcellular cell structure of 20-80 microns.

While Polyfil will contine to market its EcoCell CFA for extrusion, Trexel will now offer it under the TecoCell name for injection molding and automotive blow molding of products like ducts. Weight reductions with TecoCell are typically 7-10% in injection molding (compared with more than 20% density reductions commonly achieved with MuCell) and 30-35% in accumulator blow molding. TecoCell reacts at 200-280 C (392-536 F), suiting it mainly to PE and PP, whereas MuCell is also used with higher-temperature engineering resins. TecoCell also works well with unfilled resins, whereas MuCell is generally used with filled or reinforced materials.

Trexel says MuCell and TecoCell are complimentary rather than competing technologies. TecoCell requires no equipment modification, unlike MuCell, which needs a modified screw and barrel. That gives TecoCell an economic advantage for low-volume jobs using unfilled or talc-filled PE and PP. But once the equipment investment for MuCell is made, the ongoing costs of MuCell nitrogen injection are lower—typically less than 1¢/part vs. 3-9¢/lb added cost for 1-3% use levels of TecoCell. Because nitrogen is a more efficient foaming agent than CO2, MuCell will generally produce higher foaming levels and density reduction, according to Trexel. MuCell is also said to be superior in reducing warpage, but TecoCell may produce better surface finish—although not Class A. 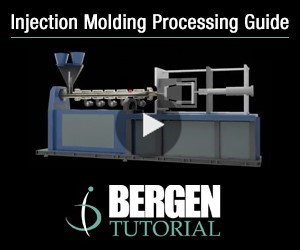