ExxonMobil’s new unimodal HDPE is said to represent a big leap in ESCR performance without compromising other properties.
#closeupontechnology #polyolefins

Paxon SP5504 boasts a paradigm shift in ESCR performance of unimodal HDPE, with the added bonus of enabling higher levels of PCR in blow molded HIC bottles and containers.

A new unimodal HDPE for blow molded bottles and containers developed by ExxonMobil Chemical is touted as a step-change in ESCR (Environmental Stress-Crack Resistance) without compromising stiffness, impact, top-load or processability. ExxonMobil says its Paxon HDPE SP5504 represents a paradigm shift in properties normally associated with currently available unimodal HDPEs, suiting it to household and industrial chemical (HIC) bottles and containers for products like bleach, wipes, and agricultural chemicals, according to Dr. James Stern, business-development manager for North America & EMEAF.

Stern notes that processors have often had to compromise to get the right ESCR performance of blow molded HDPE containers. However, since there is no compromise in density or melt index, Paxon SP5504 enables processors to create cost-effective, innovative packaging solutions for the HIC market, he maintains.

Paxon SP5504 reportedly fills the gap between unimodal and bimodal HDPE—usually recommended for superior ESCR—in terms of performance, processability and value-based performance. Thus, the new HDPE can be used as a drop-in substitute for unimodal HDPE but with a better balance of properties. It also can replace bimodal HDPE in applications that have had to be over-engineered to obtain the  desired balance of ESCR and stiffness. ESCR performance of the new grade was measured by both ASTM and NCLS (notched constant ligament stress) tests.

Paxon SP5504 has been shown to enable the production of multiple applications from standard containers through to more demanding HIC-type applications. Also, more complex molded designs reportedly can be fabricated with this one material. As such, processors can reduce polymer inventories while brand owners can be more creative with their packaging designs, ExxonMobil claims.

There are three main ways a unimodal HDPE’s ESCR can theoretically be increased: raise the density, lower the melt index (MI), or incorporate comonomer. However, these approaches tend to result in a trade-off in other properties such as stiffness and melt flow. In contrast, bimodal HDPE materials tend to show different processing, swell and shrinkage characteristics relative to their unimodal counterparts and may therefore need a different machine setup and different molds. Paxon SP5504 does not follow classical approaches to improving ESCR, in that melt index and density remain similar to unimodal blow molding HDPE.

Testing done with a stock F-style bottle mold on a shuttle machine at Bekum America confirmed that Paxon SP5504 was an excellent drop-in contender vs. a competitive unimodal blow molding HDPE resin. According to Stern, adjustments needed were simple and commonly made on shuttle equipment even when changing material or regrind percentages of the same material. Subsequently, processing feedback was confirmed at larger-scale customer trials.

Data generated on a single-cavity Bekum mold for 10-liter F-style bottles compared the performance of unimodal Paxon SP5504 ( 0.955 g/cc, 0.40 g/10min) with unimodal Paxon AA45-004 (0.945 g/cc, 0.33 MI), which has been typically used when higher ESCR performance is needed. The lower density of Paxon AA45-004 was shown to lead to reduced stiffness which can impact filling, stacking, labeling and transport robustness. 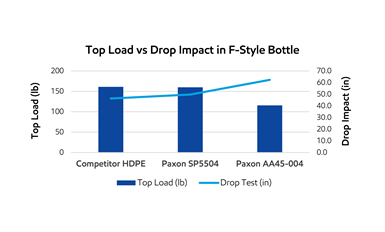 Lower density of unimodal Paxon AA45-004, which has good ESCR, leads to reduced stiffness, which can impact filling, stacking, labeling and transport robustness.

In contrast, Paxon SP5504 was shown to have a unique stiffness-ESCR balance for a unimodal HDPE. It demonstrated the same impact/stiffness balance as standard blow molding HDPE resins but with a significant improvement in ESCR. 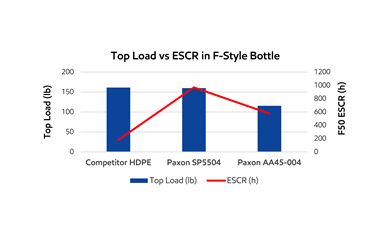 Paxon SP5004 demonstrates the same impact/stiffness balance as standard blow molding HDPE but with a significant improvement in ESCR.

Higher PCR is Another Bonus

An added bonus of using Paxon SP5504, which is being further researched, is that post-consumer recycled (PCR) content reportedly can be increased with minimal impact on bottle properties.

Paxon SP5504 with 50% PCR was shown to exceed the ESCR performance of virgin Paxon AL55-003, a blow molding grade known for its good combination of stiffness and ESCR. Meanwhile, in separate trials, Paxon SP5504 has demonstrated that its ESCR performance remains significantly above standard resins after 15 passes through a 45-mm twin-screw extruder at 220 C/428 F, as measured by NCLS tests. As such, the new HDPE blow molding resin demonstrates potential to incorporate more PCR without significant compromise in performance.

Mark Canright, ExxonMobil’s global polyolefin product technology manager, notes that “in California, the current mandate for PCR content in blow molded HDPE parts is 25% and this is expected to rise. But, adding PCR can impact the properties of the virgin material, such as ESCR and top load. Paxon SP5504 enables converters to add even more PCR without significantly compromising the properties of the finished parts.”