Going into 2021, prices of the five volume commodity resins seem set to continue their upward march, at least for now. Driving this trajectory were higher feedstock costs, supplies tightened by production outages, and healthy domestic and export demand for all of these resins but polystyrene. In some cases, most notably polypropylene, suppliers aimed to push through non-feedstock-related price increases to boost their profit margins.

Those are the views of purchasing consultants from Resin Technology, Inc. (RTi), senior editors from PetroChemWire (PCW) and CEO Michael Greenberg of The Plastics Exchange.

Polyethylene prices moved up 5¢/lb in December, bringing the total price inflation for 2020 to an unprecedented 24¢/lb. Suppliers issued hikes of 3-5¢/lb for January. According to Mike Burns, RTi’s v.p. of PE markets, PCW senior editor David Barry, and The Plastic Exchange’s Greenberg, at least part of those increases had a chance of being implemented. Burns noted that supplier inventories had been depleted by the end of the year, with the result that “contract buyers are getting everything they need, but non-contract buyers are having difficulty getting material and are paying higher prices.” Barry noted that demand was unlikely to be sustained at the same level, since processors had stocked up through December. “Still, PE pricing could potentially stay at these high levels for most of the first quarter.” 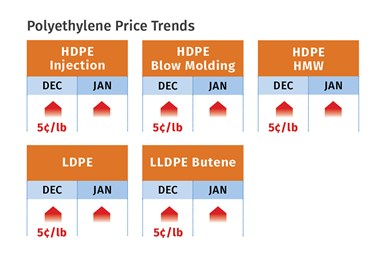 Greenberg characterized PE spot trading as remarkable, not from a volume perspective, but rather by the strong prices bred by scarcity of material. “Very tight fundamental dynamics have resulted from tremendous demand, both export and domestic; ongoing and new production issues; and a change in market sentiment as many buyers planned for a break in prices and readily available supplies, which never came. Although new PE production units have been coming onstream, and upstream inventories have built, some of this material is deemed as startup and much of the bulge is destined to be sold into the growing export market.” These sources also noted that the Braskem Idesa feedstock debacle, which shut down a massive PE production facility in Mexico, also added significantly to export demand. Information regarding the contract dispute or a restart date was not available at press time.

Polypropylene prices in December moved up a total of 14¢/lb, 10¢ of which was in step with propylene monomer prices and 4¢ went toward boosting supplier margins. Moreover, suppliers were looking for another 5-6¢/lb for January in addition to any change in the monomer contract price. Both Scott Newell, RTi’s v.p. of PP markets, and PCW’s Barry saw January monomer contracts moving up another 5-6¢/lb. Greenberg reported, “Spot monomer prices have continued to rally and suggest that another large increase awaits buyers in January.” All three sources noted that with U.S. refinery operating rates stuck at 78-80% through December, recovery of propylene monomer supply was unlikely in the near term. 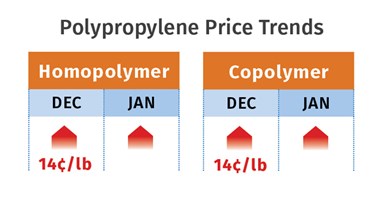 Noting that PP resins remain very tight, with unplanned production shutdowns contributing to the pinch, Barry reported that spot availability of generic PP was not expected from some suppliers until late first quarter or early second quarter. Newell noted that domestic demand had outpaced supply in the fourth quarter, up 9-10%, with nearly all key sectors weighing in including consumer packaging, rigid goods, and automotive. Neither he nor Barry anticipated that domestic demand would be sustained at these high levels through the first quarter, and they also noted that there would be some demand destruction due to the high domestic PP prices. Said Newell, “Expect to see PP imports through the first and second quarters. Whereas imports in fourth quarter were not attractively priced but were needed, prices of imports going into the new year would be lower as domestic prices have spiraled.” He ventured that PP prices would remain high for most of the first quarter, with potential for some market correction toward quarter’s end.

Barry reported that the domestic PP market’s premium over Asian prices has reached levels not seen since 2018. “In the past, this has opened the door to high import volumes of PP resin and finished goods to help rebalance the North American market, but international supply availability and logistics appear tighter this time around.” Both sources noted that PP exports had dwindled as much as 70% by November, compared with the 2020 high point in June.

Polystyrene prices in December rose at least 6¢/lb, depending on a buyer’s competitive situation, as suppliers posted hikes ranging from 6¢ to 10¢/lb, according to PCW’s Barry and Robin Chesshier, RTi’s v.p. of PE, PS and nylon 6 markets. Moreover, at least one supplier issued a 5¢/lb increase for January. Both sources noted that the price hikes were driven solely by higher prices of key feedstocks—benzene, up $1/gal, styrene monomer and butadiene up as much as 10¢/lb. Barry reported at year’s end that the implied styrene cost based on a 30/70 ratio of spot ethylene/benzene was at 32¢/lb, up 5.4¢/lb over the previous four weeks. 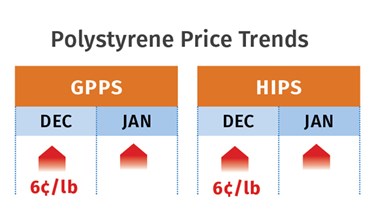 Chesshier ventured that PS prices had potential to move up again in January if benzene contracts rose another 5-7¢/gal. Barry saw similar potential for a PS increase of 2-3¢/lb. Both sources foresaw some possible softening of prices in February, because benzene spot prices were already starting to drop. PS demand continues to be generally poor, with the exception of HIPS for the appliance sector.

PVC prices in December were flat, despite suppliers’ aim to boost prices by 3¢/lb, but a new attempt for January was on the table with suppliers calling for a 4¢/lb price hike. Moreover, at least two suppliers had come out with yet another 3¢/lb for February, according to both Mark Kallman, RTi’s v.p. of PVC and engineering resins and PCW senior editor Donna Todd.

Kallman ventured that the January 4¢/lb initiative was a “50-50 proposition”, noting that if all or part of the increase would be implemented was largely dependent on whether exports demand was sustained and if domestic production was curtailed. “There were indications that production levels were already improving going into January, and that exports would be lower as Asian PVC production became more balanced.” One caveat was the impact of the unknown duration of planned maintenance shutdowns scheduled for first quarter. Still, Kallman ventured the February increase would not get through, noting that it was strategic move to ensure the January increase would be implemented. 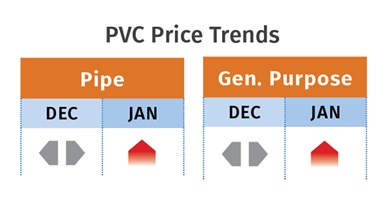 PCW’s Todd reported that resin buyers contended there was no justification for 7¢/lb in price increases, and that the new price initiatives were aimed at keeping upward pressure on prices and to counteract previous market predictions that resin pricing would begin to drop by year’s end. “Contract negotiations were ongoing and reported to be contentious,” she said.

PET prices remained steady at 50-55¢/lb going into 2021 for spot railcar and truckloads delivered to the Midwest and South, according to PCW senior editor Xavier Cronin. Contract business for multiple railcars was seen in the high-40¢ to low-50¢/lb range. Costs of feedstocks PTA and MEG were expected to settle higher for December contract business, which in turn would boost resin prices for buyers with contracts tied to monthly feedstock price indices. 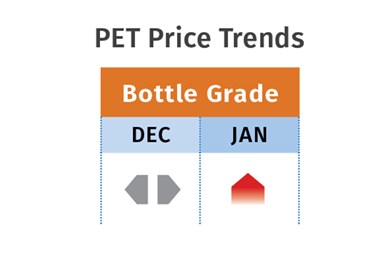 “February prices are expected to rise 2-4¢/lb for spot business if bottle demand remains at its current pace,” noted Cronin. The exception would be buyers of a railcar here and there on the spot market, who would probably see prices remain flat. Buyers of imported PET might get it for a few cents less. Last year’s domestic demand for PET bottles, containers and packaging remained higher than 2019, a pattern that emerged last April as the COVID-19 pandemic’s intensity increased. At the same time, U.S. imports of PET resin were also higher for most of 2020, compared with 2019. “This has taken some pressure off PET demand from U.S. producers” and has kept a lid on prices, said Cronin.