Volkswagen is further showing its commitment to the promise of additive technology for production operations by the opening today of a 3,100-square meter center in Wolfsburg that is dedicated to the technology.

The additive center is associated with the Volkswagen brand’s Toolmaking unit.

The Difference Between Knit and Meld Lines--and Why It Matters 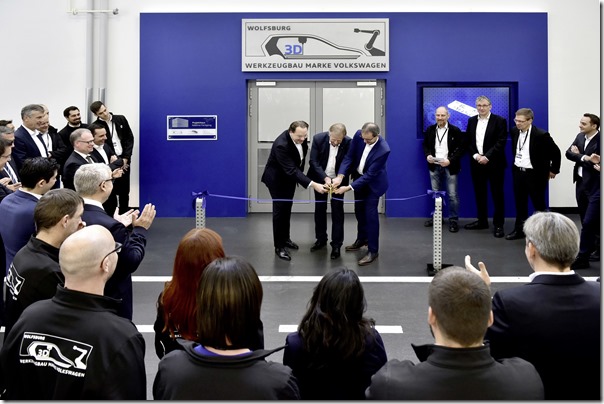 The center includes an array of 3D printers that were developed in cooperation with HP, which uses the binder jetting process that will allow, according to Volkswagen, faster and easier production of metal parts. In addition to which, there are selective laser melting (SLM) printers in the facility.

According to Dr. Andreas Tostmann, Board Member for Production of the Volkswagen brand, “The 3D printing center takes Volkswagen’s additive manufacturing activities to a new level. In two to three years’ time, three-dimensional printing will also become interesting for the first production parts. In the future, we may be able to use 3D printers directly on the production line for vehicle production.” Which is certainly an aggressive timeframe.

But in the meantime, the focus will apparently be on tooling and fixturing.

An interesting aspect of this is that the center receives subsidies from the Volkswagen Innovation Fund II. In 2016, seeing that there would be significant changes vis-à-vis employment as there is a shift to new technologies, the company worked with labor to establish a path forward for workers in advanced areas.

So, for example, an additive manufacturing unit has been established that includes 11 new jobs.

At the opening, Susanne Preuk, Works Council member, said, “The inauguration of the 3D printing center underlines the importance of Innovation Fund II, which makes investments like this possible. The Works Council welcomes the fact that the company is opening up to new technologies and shaping them in a future-oriented way in the interest of the employees.”

(If want to learn more about additive in automotive, you might consider attending the Additive Manufacturing Workshop for Automotive, which is being held January 16 at the North American International Auto Show.

(You can get full details here.)