A project initiated by an existing customer prompted injection molder Pittsfield Plastics Engineering LLC (PPE) to boost its large-part molding capability. Back in November, PPE added a 1204-ton injection machine with a shot capacity of 155.6 oz to its plant in Pittsfield, Mass. PPE’s investment in the Haitian Jupiter III (JU10800 III) from Absolute Haitian is the latest in a series of upgrades the molder has made over the last five years. The machine cell is equipped with a CW15-2000 servo robot from sister company Absolute Robot. Before this purchase, the largest press at PPE’s facility was 730 tons.

PPE is an ISO 9001:2015 certified company, housed in an updated 64,000 ft2 facility with 25 presses. It runs three shifts in a 24/7 operation. Its molding operation is supported by a fully equipped tool room. PPE has also recently ramped up its R&D efforts with a new technology center housing a gamut of testing machines. In addition to custom work, PPE has a proprietary line of spools for the wire-and-cable and textile industries.

Bruce Dixon, CEO/CFO of PPE, recalls the circumstances that led to the purchase of the new large machine: “An existing customer had a substantial project that required a large-tonnage press and we wanted to take advantage of the opportunity. If we didn’t add a larger tonnage machine quickly, we would have missed out on the project.”

The initial job is to mold kayak seating, but Dixon has additional projects lined up for the JUIII, including electrical enclosures used in commercial real-estate development. “Our current utilization of the JUIII is about 50%, so we have custom molding availability that we plan to grow,” states Dixon. 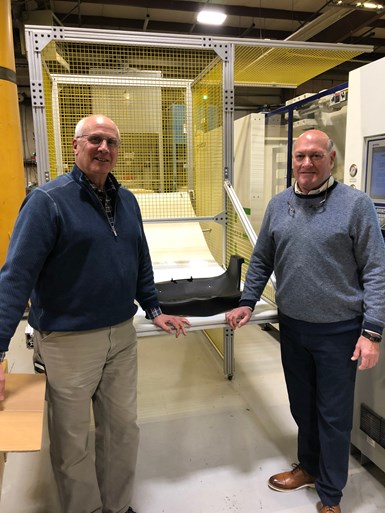 The decision to differentiate PPE from competitors with large-tonnage molding capability was based in part on Dixon’s realization that if their own 730-ton machine went down, there wasn’t a nearby molder they could outsource the work to. “There just aren’t many large machines in the New England area and we saw this as an opportunity,” he notes.

One challenge was to bring the large-tonnage machine online quickly to meet the customer’s timing. States Dixon, “Delivery was a critical factor. We began looking at Absolute Haitian’s stock-machine availability, which would have worked. But their lead time on a machine built to our specifications and needs was so aggressive, we were able to place the order from China. It was nice to have that choice.”

Installation took about four days and was overseen by Absolute Haitian’s service engineering team. “The service engineers worked closely with our maintenance supervisor throughout installation, so we became very familiar with the JUIII during startup. Like the product, the customer service from Absolute Haitian has been excellent,”  Dixon notes. “Not only is our capability increased, the JUIII is more robust and runs at a more efficient pace. This acquisition puts us in a nice position for 2020.”

As a result of the energy savings from the servohydraulic, two-platen JUIII, PPE applied for and received a rebate in excess of $25,000 from its energy provider, Eversource Energy.