Flat to Higher Pricing for Polyolefins, PS, PVC and PET

The trajectory for resin pricing going into the second quarter is unsettled by a virus outbreak.
#pvc #polystyrene #pet

In mid-first-quarter 2020, prices of polyethylene, polystyrene and PVC were up, while polypropylene and PET had potential to move up a bit as well. In most cases, prices had bottomed out and were more on par with global prices. Domestic demand going into second quarter was not fully clear, though there was cause for optimism, despite significant uncertainties. To what extent would domestic resin pricing be affected by the coronavirus outbreak in China, a major importer of U.S.-made PE and PVC. Yet another uncertainty was the potential impact of the Feb. 12 fire at ExxonMobil’s major refinery in Baton Rouge, La.

An ExxonMobil spokesperson told PT that operations continue at the refinery and chemical plant. Asked how this might impact PE availability and pricing, the response was, “As a matter of practice, we do not comment on the operational status of specific units. We continue to meet contractual commitments and expect to meet all customer commitments.”

This report reflects the views of purchasing consultants from Resin Technology, Inc. (RTi), senior editors from PetroChemWire (PCW); and CEO Michael Greenberg of The Plastics Exchange. 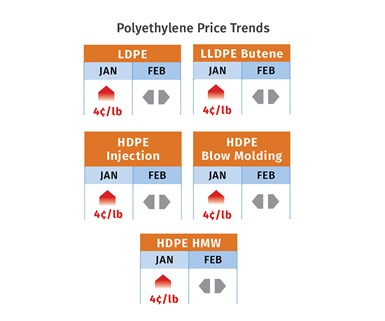 Meanwhile, suppliers were seeking another 4-5¢/lb in February.  Burns predicted that suppliers would seek any justification for the February hike—which all three sources expected would “spill into” March—and noted that the impact of the Chinese coronavirus would significantly change the market outlook in February and March. “Without global demand and export opportunity, inventories will continue to grow and outpace demand,” said Burns.

PCW’s Barry reported that PE spot prices were higher in the first week of February and attributed this to tighter spot availability driven at least partly by an uptick in turnarounds and unplanned outages. “However, domestic contract buyers reported no issues with resin supply, and domestic demand was viewed as steady, but not great. Higher February export offers were meeting resistance, as falling crude-oil prices and the coronavirus outbreak were dampening market sentiment.”

Greenberg reported that spot PE trading remained healthy by the end of February’s first week, despite higher spot pricing as suppliers “finally inked their 4¢/lb January contract increase. “While international trade continued to flourish, concern grew about the potential economic threat from the coronavirus, somewhat spooking the market. There is another nickel increase nominated for February, but let’s fully digest the January increase first.”

Polypropylene prices remained mostly flat in January, in step with that month’s propylene monomer contracts, but falling spot monomer prices were expected to result in a drop of 1-2¢/lb in PP. Meanwhile, PP suppliers announced margin-enhancing increases of 3-4¢/lb for March 1, in addition to any change in monomer pricing. This was an attempt to recoup some of the previous months’ losses, according to Scott Newell, RTi’s v.p. of PP markets, whose opinion was supported by Greenberg and PCW’s Barry. 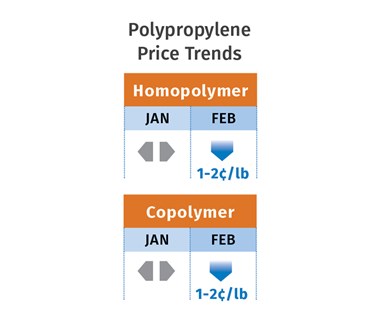 Newell did not expect much price volatility, noting that the latest PP capacity-utilization rates were in the low 80s, with supplier inventories still adequate, and PP imports trending lower. Added Barry, “PP import volumes have dropped by almost half from 2019 because U.S. PP prices are on par with global prices.” PP spot prices were flat to higher amid tighter supply. He reported that while demand appeared to be somewhat stronger at the start of the year, the main driver of the market tightening was low operating rates, with several planned outages either ongoing or coming up.

By the end of the first week in February, Greenberg characterized the PP spot market as slowed, due primarily to tighter supply and higher asking prices. “Solid demand remained, and while some balked at the penny or 2¢/lb bump up in price, a solid, but not overwhelming, number of deals were still completed at the higher levels. While some buyers were initially incredulous as prices begin to reverse back higher, others recognized that new the PP price levels were still exceptionally inexpensive on a historic basis and took the uptick in stride.”

Polystyrene prices moved up 3¢/lb in January, and a rollover was projected for February, according to both Robin Chesshier, RTi’s v.p. of PE, PS and nylon 6 markets, and PCW’s Barry. Both observed seasonally soft demand with adequate supply. 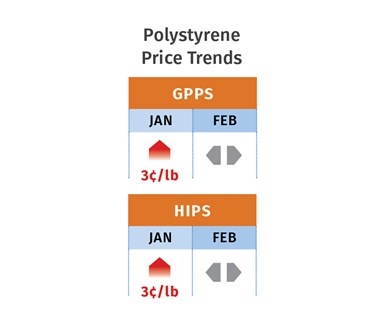 By February’s first week, the implied styrene monomer cost based on a 30/70 ratio of spot ethylene/benzene was at 28.9¢/lb, down 0.5¢ from the prior week and down 1.2¢ since the start of the year, according to Barry. Said Chesshier, “You’ve got feedstock prices retreating—both styrene monomer and ethylene, and no demand. But, monomer prices and PS prices are rising elsewhere due to higher benzene and styrene prices abroad.” She also ventured there was potential for upward pressure on PS prices in March as refineries change over from winter to spring fuel, which tightens benzene availability; coupled with fewer benzene imports and the seasonal uptick in demand in the second quarter.

By all accounts, PVC prices in January moved up 3¢/lb, according to both Mark Kallman, RTi’s v.p. of PVC and engineering resins, and PCW senior editor Donna Todd. This came after price slippage of 2-3¢/lb in the fourth quarter of 2019. Meanwhile, another 3¢/lb increase was at play for February, and a further price uptick for this month was under consideration, according to Todd.

Kallman predicted that suppliers could get another 1-2¢/lb from the February hike, citing stronger-than-normal January demand and the potential for earlier seasonal demand in the construction sector by end of this quarter. Still, he saw the February price initiative as a “tough go” for suppliers and ventured that PVC prices in March could also be flat. He based this on the potential impact of a protracted coronavirus epidemic, which will hurt suppliers’ export business and would result in downward pressure on domestic prices. 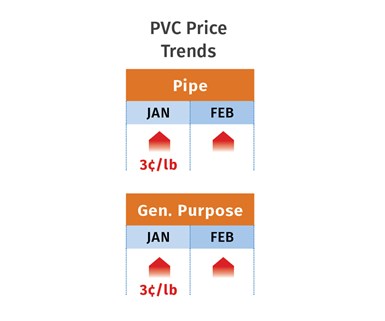 Todd reported that suppliers’ confidence to further hike PVC prices was based on tight supply resulting from several planned and unplanned production disruptions. She said supply could remain tight through at least March, and possibly even longer.

PET Prices Flat to Down

PET prices were steady going into February, in the mid-to-high 40¢/lb range, delivered Midwest and South, with offers for East Coast delivery at 48¢/lb. Offgrade PET was in the mid-40¢ range for railcars delivered to the Midwest—steady from mid-January.

PCW senior editor Xavier Cronin characterized spot-market activity as heavy in the first week of January as buyers for U.S. end-users locked in monthly deliveries, in some cases through February. Weak PET demand in China added to the supply glut that affects markets in the U.S., Europe and other parts of Asia. 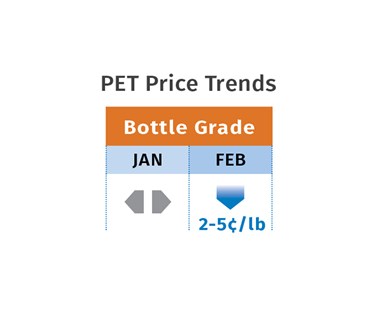 Cronin expected PET resin prices to fall 2¢ to 5¢/lb in February due to  bloated supply outpacing demand from manufacturers of single-use PET bottles, containers and packaging. He ventured that prices in March would creep up a few cents higher from February as bottle, container and packaging manufacturers aim to meet rising demand for single-serve drinks, water and other beverages that typically arrives with warmer weather in springtime.