Want to see a skeptical molder? Tell him about a new material that will run on existing presses and tooling with little or no modifications—a “drop-in replacement.” Yet that was essentially the recent experience of custom molder Plastic Injection Molding Inc.(PIM), Richland, Wash., when it began transitioning from PC/ABS to new grades of Eastman’s Tritan copolyester for electronic medical housings and hardware used in patient monitors and other equipment in hospitals.

Eastman took the wraps off a next-generation portfolio of its medical-grade Tritan MXF specialty copolyesters last year. In an effort to expand the line, it has since collaborated with OEMs to identify the attributes needed for specific product requirements and processing characteristics that improve manufacturability. The fruits of this effort were on display in February at MD&M West 2020 in Anaheim, Calif., when Eastman unwrapped a collection of flame-resistant (FR) grades specifically suited for the rigors of patient-care hospital equipment.

New grades of Tritan MXF copolyesters from Eastman aim at medical-device housings, where they can reportedly withstand a wide range of disinfectants without discoloring or failing. Photo above is an ultrasound device. A ventilator is below.

The MXF product line started with Tritan MXF121, which is built on Tritan’s proven durability and disinfectant resistance—a key consideration in hospitals, considering all the different types of disinfectants they use, and a particularly topical matter now as a result of the coronavirus pandemic. The portfolio now includes FR grades with a UL 94V-2 flame rating. These materials reportedly offer unsurpassed chemical compatibility with a wide range of disinfectants used to combat HAIs (healthcare-associated infections), as well as improved durability and higher impact strength. Tritan MXF is said to be easy to process and to require lower ejection force for easier demolding.

According to Brad Potter, marketing director for Eastman Specialty Plastics-Medical, Tritan MXF copolyesters can save money across the value chain due to reduced repairs, returns and warranty claims from device breakage, a low scrap rate and the lack of retooling necessary when changing from PC/ABS to Tritan MXF. Potter maintains that use of only Tritan MXF in an assembly has been shown to reduce expenses associated with the use of multiple polymers, which can cause discoloration and durability issues. “Switching to Tritan MXF adds value throughout product design and commercialization and ultimately lowers the cost of ownership. Most importantly, using Tritan MXF polymers in medical-device housings enables healthcare workers to clean those devices more thoroughly with proper disinfectants, ultimately reducing the incidence of HAIs and positively impacting patient outcome.”

In business for almost 25 years, PIM runs nine presses in its original building and recently completed an additional 28,000 ft2 plant expansion housing six additional injection molding machines. Tonnage ranges from 25 to 300 tons (shot sizes from 1.5 oz to 30 oz). The molder’s forte, as Williams puts it, “is anything and everything weird,” running a wide range of materials that include formulations of 50% tungsten and 50% nylon. 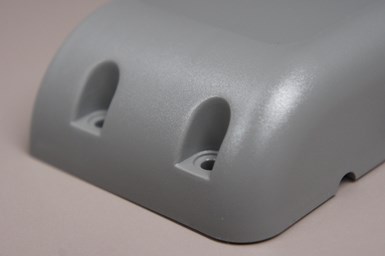 PIM is switching from PC/ABS to new Eastman Tritan MXF speciality copolymer for more than 100 parts it supplies to an OEM of patient-care instruments and devices. Shown above is an ultrasonically welded drum assembly.

In a project that was initiated by an unidentified OEM customer that furnishes patient-care equipment to hospitals, PIM started running the material last fall in what company president Ken Williams called “Eastman Day.” He elaborates, “Our customer had a materials expert who for a couple of years was asking for an alternative to PC/ABS for the parts we make for them. So for one day, we shut down the plant and ran Tritan MXF on a dozen different parts.

Among the parts PIM now runs out of Tritan MXF is this overmolded thumb wheel.

“We ran four different grades of the material, including lower-flow grades with higher chemical resistance and higher-flow versions with lower chemical resistance,” Williams continues. It turned out to be a relatively straightforward transition. We ran the molds a bit cooler, the level of shrink was similar, and for both processing and secondary operations such as pad printing and ultrasonic welding, everything was pretty straightforward.”

PIM now runs about 100 different parts for this OEM on 57 molds. Switching from PC/ABS to the Tritan MXF portfolio required only minor tooling modifications, recalls Troy Stivers, PIM’s v.p. of manufacturing. “We had to increase the gate area, which we were able to do in our own tool room.”

For this customer, Williams notes that PIM will be phasing out PC/ABS over time. “We are ready now to start on several products,” he told Plastics Technology back in March. “We’ve recently received a large order and will be ready for more when the PC/ABS parts reach the end of their lifecycle.”

PIM now molds inner housings like these out of Tritan MXF for medical-diagnostic devices.