Long a mystery to injection molders, actual temperature of melt entering the mold is said to be revealed by an easy procedure that is repeatable and takes less than a minute.
#closeupontechnology #monitoring

There is general agreement among processing specialists that melt-temperature control remains one of the “last frontiers” of injection molding process control. “You can’t control what you can’t measure” is a fundamental axiom, and the real problem here is the lack of an accurate, repeatable, practical, and generally accepted method of measuring the melt temperature inside the barrel or nozzle of an injection machine.

Methods tried in the past include inserting a sensor through the wall of the nozzle. Experts say the sensor reading with this method is overwhelmingly influenced by the steel temperature of the nozzle rather than the melt. Even if the tip of the sensor is exposed directly to the melt, it will measure only the cooler, slower-moving melt closest to the nozzle wall, due to the laminar-flow behavior of plastics. And it has proven impractical to insert the sensor near to the center of the flowing stream, owing to the dynamic forces on the fragile sensor. 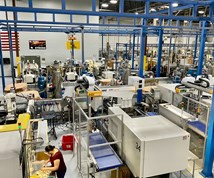 The other main approach has been to purge some melt and stick a probe manually into the blob of purge—which has been proven by long experience to give highly variable results that are sensitive to operator technique. A variation on this method using an infrared scanner reportedly also requires careful technique and measures only the surface of the purged material.

A few companies are addressing this problem with new technologies that are not yet widely adopted. (We have reported on such technologies from Md Plastics and Futaba Corp.) Just released onto the market this spring is an approach developed and patented by a retired tooling and molding specialist that is said to overcome the limitations of historic methods.

Bleck’s career afforded him ample experience with the vagaries of melt-temperature sensing. “I spent thirty or forty thousand dollars buying different infrared and conventional pyrometers, probes and preheaters for Phillips to try to solve this problem,” he says. “Melt temperature has always been a mystery, as it is difficult to measure accurately. Few processors have the time, knowledge or equipment to get a handle on it. When they have a processing problem, one of the first things a service technician asks is, ‘What’s your melt temperature?’ The molder answers, ‘My barrel is set at such-and-such. Beyond that, I don’t know.’

You can’t control what you can’t measure.

And why is melt temperature so important? Answers Bleck, “Melt temperature influences the plastic’s viscosity or resistance to flow, which is critical in obtaining optimal part dimensional control. Consistent viscosity allows for repeatable filling of the mold with consistent cavity pressure.”

That is what led Bleck in 2015 to start developing his patented Melt Temperature Measurement System (MTMS). It involves an adaptation of the purge measurement concept, but with an important difference. The shot is purged into an insulated cup fitted with a thermocouple. Bleck notes that such an approach has been tried in the past, but says it is very difficult to use with small shots, because it requires multiple shots to fill the cup. This not only takes additional time, but ignores the effects of screw rpm, backpressure and residence time on the melt temperature. 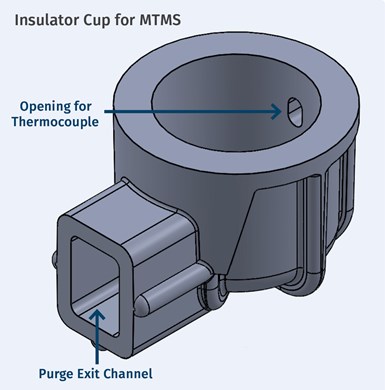 PP “insulator cup” is smaller than a thimble. During a purge shot, melt passes continuously over a thermocouple (inserted through a hole in the side) and out the side exit. The cup is used only once and costs as little as 50ȼ. Since no pressure is generated, it reportedly can withstand melt temperatures up to 650 F.

Bleck’s MTMS avoids such limitations by purging into and through an insulated cup, which has a large exit channel on the side. This can measure almost any size shot, from 0.5 oz to 10 lb, Bleck says. The way it works is as follows:

1.  Establish a stable process—run for at least 10 min or around 20 shots.

2.  Switch the machine to manual control.

4.  Set a machined metal “purge puck into the locating ring on the platen, where it is held in place by magnets.

6.  Bring barrel forward and purge a full shot through the insulator cup. Read melt temperature on the pyrometer. (Watch this in action at http://short.ptonline.com/MTMS2.)

Bleck says the procedure involves less than a minute of total cycle interruption—as little as 35 sec. It’s also desirable from the aspect of operator safety, as personnel should be protected by the closed purge guard during the measurement.

The insulator cup is injection molded of PP, but it reportedly can be used for almost any material at a temperature up to 650 F, because the heat exposure is quick, and “We generate no pressure in the cup,” Bleck notes. He concedes that the cup is not suitable for use with highly filled materials. The cup itself is “smaller than thimble size” with a volume of only 0.8 oz. It is used only once.

The thermocouple probe is deployed in a manner so that melt flows first over and surrounds the body of the probe before it flows past the sensing tip. This prevents the body of the probe from being a heat sink that distorts the temperature measurement. What’s more, Bleck points out that the probe can be removed cleanly from the cup and purge puck, because at the end of the test, material in the center of the purge is still molten. “When you do a conventional purge measurement, you’ll typically find a ‘skin’ of plastic solidified around the sensing probe. Not with this system.”

Bleck notes that this method requires minimal training—“So anyone on the floor can use it”—and has excellent repeatability (±1% or typically ±4-5° F) between operators.

The MTMS is manufactured and marketed for Procon by Schmit Prototypes, a rapid-prototyping service in Menomonie, Wis. (schmitprototypes.com). It is supplied as a kit ($899) in a carrying case containing the purge puck, a pack of 50 insulator cups, a metal ring that holds the cup in place, two thermocouple probes, and a pyrometer, which measures three times a second and displays the peak temperature measured during the purge shot. Additional cups are available for as little as 50ȼ apiece.

Commercially available since mid-April, 15 kits were shipped in the first two weeks, including one to Austria; and there have been inquiries from as far away as Singapore. “The biggest response was from medical molders,” says Bleck.

Andy Gruber, a process engineer at Phillips Medisize in Phillips, Wis., worked with Bleck when he was on staff there and since last November has helped with prototyping the MTMS. He describes the new system as “ground breaking” and “a huge advance” because it’s “repeatable from user to user,” requires less downtime, is safer than typical purge measurements, and “gives more true temperature numbers than I’ve ever seen.”

“We need a better understanding of melt temperature to reduce part-to-part variation.”

Gruber sees more accurate temperature measurement as the key to more consistent part dimensions and overcoming warpage, flash and short shots. “If we can repeat our process we can make the same part from run to run, lot to lot, and week to week.” His plan is to eventually purchase a handful of MTMS kits for the two plants at that location. “I have one for troubleshooting, and I want the pre-production guys to have them. I’d like to have enough kits to use them on every startup, every restart, and every shutdown.”

“There are five variables that affect melt temperature,” says Bleck. “They are external heater bands, screw rpm, backpressure, screw design, and residence time. But 80% of the influence comes from screw rpm and backpressure.” With MTMS, he says, molders can do a DOE material characterization study to determine which input has the greatest effect on temperature of a particular material. “For example, what happens to melt temperature and cavity pressure when you turn up the rpm? What happens to gate blush, orange peel, degradation and outgassing?”

His main overall point: “We need a better understanding of melt temperature to reduce part-to-part variation and narrow that Bell curve—especially when moving a mold to a different press. How can we commit to continuous improvement if we can’t measure what we are doing inside the machine?”

John Bozzelli, a well-known injection molding trainer and consultant (and a columnist for this magazine), confirms Bleck’s message: “Temperatures on the machine’s controller screen can be way off--50° to 100° F—due to a host of reasons, from the type of thermocouple used to its placement in the barrel hole, etc. Different machines may be set at the same temperature, but they rarely achieve the same actual result. This changes the process and the parts. Most processors run the resin in the upper end of its temperature range, often causing degradation without knowing it.”

His opinion of the MTMS: “My preference is to have a method to provide melt temperature as you are making parts, every shot. That is what I have been working on. No luck yet. But Rich’s system is the best I have tested or seen in the industry to date for purge methods. It will give you good results and you will get repeatability from different people with a minor amount of training. It also does not interrupt the process for very long.”