Manufacturing Looks To a New Generation for Employees

Generation Z—adults aged 18 to 22—are more likely to have had manufacturing suggested to them as a career path compared to previous generations and are more open to entering industry than their older peers. Those findings and more are from a survey conducted by Leading2Lean (L2L). 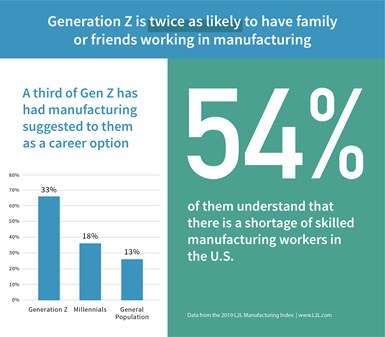 Compared to previous generations, Generation Z is more familiar with manufacturing as a career path.

Generation Z was particularly receptive to the suggestion, according to the survey, because of what they’d seen Millennials experience. “Generation Z grew up in the midst of the Great Recession, watched their older peers accumulate student debt, then struggle to pay it off with low-paying jobs right out of college… they’re increasingly open to alternative types of education and training.”

According to the survey, Gen Z is:

Generation Z grew up in the midst of the Great Recession, watched their older peers accumulate student debt, then struggle to pay it off with low-paying jobs right out of college.

That growth, plus the retirement of boomers (10,000 people reach the age of 65 each day) is creating unmet demand for new workers and many shoes to fill on the shop floor. L2L reports that according to the latest government data, there are now 522,000 open manufacturing jobs in the U.S., which is an all-time high. A report from Deloitte and The Manufacturing Institute projects that 2.4 million manufacturing jobs will go unfilled over the next decade.

As Baby Boomers retire, Generation Z (adults ages 18 to 22) could step up to fill their shoes on the manufacturing shop floor.