Molder Gets Into World-Class Shape

Shape Corp.’s new chief operating officer (COO) had a challenge for the company’s only all-plastics manufacturing plant in Grand Haven, Mich.: 20-minute mold changes. Arriving at Shape in early 2019 from another large Tier One automotive supplier, Jonathan Gregory knew what constituted “world-class” injection molding and took that into account when he created that goal for Shape.

Shape, itself a Tier One automotive supplier, was founded in 1974 and started in steel roll forming. It has grown to include 14 manufacturing facilities on three continents for metal, plastic and composite components. Plastics were added around 2003, and today the company has three sites with injection molding: Grand Haven (also the corporate headquarters); Athens, Ala.; and Querétaro, Mexico. Those operations run large-tonnage presses and focus on automotive, supplying components like door carriers, front-end modules and energy absorbers. Grand Haven’s 11 injection machines range from 660 to 2500 tons, and many of the tools to be changed in 20 min or less stand taller than the workers tasked with swapping them out.

“Guys, let’s stop talking about whether we can or can’t, or if that number is right or not, and let’s just go for it.”

“Gregory came in and said, ‘You guys, for the types of molds that you’re changing out, you should easily be able to hit 20-minute mold changes,’” explains Pete Klahorst, Shape’s managing director. “That really freaked a lot of people out.” Shape relies on automation to support molding and secondary operations.

At the time, mold changes at the plant took from 40 min to over an hour, depending on the type of machine and the material mix, says Tyler Forbes, Shape’s global plastics technical manager. Klahorst described the COO’s challenge as a “call to action” for the Grand Haven plant—a “stretch” goal that would require more deeds and fewer words. “We took the challenge to the team and said, ‘Guys, let’s stop talking about whether we can or can’t, or if that number is right or not, and let’s just go for it,’” Klahorst says. “‘Let’s figure out what we need to do to get to a consistent sub-20-minute mold change,’ and the team just rallied around it.”

The initial focus was placed on internal changeover time—or any time that required the machine to be down or off. Changeovers themselves were sequenced to reduce waiting and ensure the molding floor didn’t schedule more tool changes than there were team members available to swap molds, forcing a press to wait. On the technology front, the company deployed a dual-hoist system so that the new mold is staged and waiting on the crane while the other is being pulled out. All molds are preheated and kept permanently watered with color coding and quick couplings for fast, efficient changes.

Before those changes were made, the company embarked on “benchmarking tours” to see best practices at other organizations. Grand Haven also swapped ideas with its fellow Shape molding operations in Alabama and Mexico. Microsoft Team online sites were created and used to share videos and pictures of successful ideas. “They learned from each other,” Klahorst says. “They were sharing best practices and celebrating it, building this community to rally around it.” 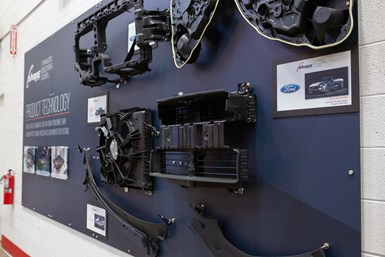 As a Tier One automotive supplier, Shape supplies a number of different components for various OEMs, including door carriers, front-end modules and energy absorbers.

Shape measures mold changes as the time from when the last good part came off the old tool until the first good shot is ejected from the new mold. Forbes says that every machine on the Grand Haven shop floor changes jobs at least once a day, with more than 150 mold changes made in one recent month.

Grand Haven is now down to 14-min mold changes, even hitting 13 min at times. “Six months ago, no one would have thought that was possible; so now we’re asking, ‘How do we get it down to five minutes?’” Klahorst says, with a laugh, noting that staff thinks management might be crazy to push for such a goal. “Well, we were crazy when we said we’d get below 20 minutes,” Klahorst says.

The company’s success in wringing the utmost efficiency out of its mold-change process has pushed it to optimize other segments of its operations. “I’d say we lost a little bit of focus on improving not only our mold changes, but maybe our lean methodologies as a whole,” Klahorst says. “We kind of slowed down a little and sometimes you need a good kick in the rear end to get you focused again.”

The company has reduced stock and work-in-progress (WIP) inventory by more than $1 million, keeping two to three days’ worth of product on hand and freeing up former inventory space for new value-added operations. As much as possible, the company strives for inline processes versus offline assembly, eliminating the time and the space required to store unfinished components. The company also switched from a traditional printed Kanban scheduling system with physical cards to an electronic one that boosted speed and transparency, while helping Shape determine the inventory and WIP it should have on hand.

We only load operators up to about 85-90%, at most, so they have time to deal with problems.

As containers are filled and labeled, an electronic Kanban card is depleted, representing inventory. Upon shipping, that electronic card goes back automatically into the digital Kanban rack. “We initially calculate our economic run quantities with a very advanced spreadsheet that helps us to establish our optimal Kanban levels, and it’s easy to go in and make adjustments or run scenarios,” Forbes says. The digital racks change from red to yellow to green just as in a normal Kanban system, so they know how many hours of production time they have and can build in time for line changes.

For inspection, Shape has created a standard set of touch points reviewed on each part in a sequence that was specified for that component. Starting on one side, workers then flip parts over and complete the same sequence on the other side, using both visual and tactile cues. A “standard” part hangs at their work station for comparison. “This makes it very systematic for people, and they get accustomed to doing it in the same way,” Forbes says. “Touch point means they literally are going to have to touch it and look at it, so you’re utilizing two senses.” Shape has accounted for the amount of time required to undertake this process and built it into their process flow so workers have the time to inspect. Shape also makes sure employees’ work flow is scheduled in a way that includes flexibility to deal with issues. 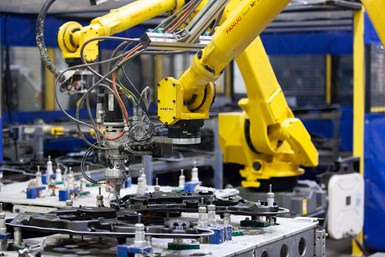 Shape has worked to move secondary operations, such as automated application of foam insulation, inline to reduce work-in-progress (WIP).

“We only load operators up to approximately 85-90%, at most, so they have time to deal with problems,” Forbes says. “If something arises, they have time to continue to do their work in a proper fashion—touch points are built into that time also.”

No More Molding in the Dark

Shape builds in time to deal with problems should they arise, but its pervasive use of RJG process-monitoring technology helps ensure they often do not. While some molders might use RJG’s eDart system to establish a process for a new tool and then move forward without any monitoring, Shape applies RJG technology on all its tools at all times. “We said, if we’re going to bother to have the equipment here, we need to utilize it religiously,” Forbes says. “You need to live by it; you can’t just implement it haphazardly here and there, or it won’t be successful.” 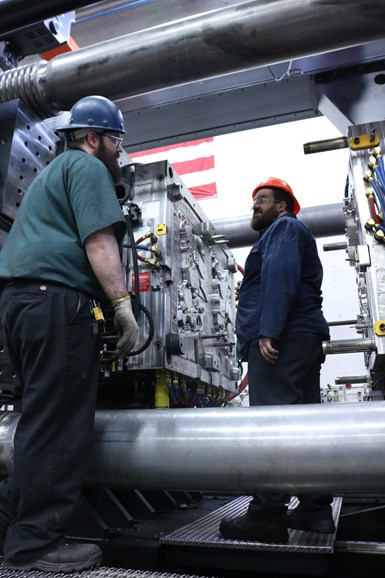 “The RJG eDart system allows us to establish an optimized process,” Forbes says. Shape also uses the monitoring and cavity-pressure control options to negate much of the variation in the process. “The technical guys wouldn’t want it any other way,” Forbes says. “They can’t imagine a world without using it in plastics, and I really agree with them.” Forbes’ analogy: You could drive a car in the dark without headlights, and you might not crash, but why would you risk it? Shape uses RJG eDart systems to establish an optimized process, and sticks to controlled templates and alarms to lock that process in.

Months after initially posing the challenge to the shop floor, Shape’s executive team, including Gregory, were in Grand Haven for a business review and the mold-change team was ready to show off. Gathered around the press, one eye on their watches and the other on the machine, the executives watched as the mold change started. After a smooth start a gate stuck, putting the timing in danger; but after quick countermeasures, the new mold was in and running good parts in 16 minutes. Klahorst says the mold-change crew was disappointed the changeover hadn’t been flawless, but personally he was thrilled.

“I said, having the problem was perfect because it showed that you can react,” Klahorst says. “It wasn’t just staged.” For Gregory and the rest of the executive team, the demonstration was flawless. After high-fiving the crew, Gregory said he planned on contacting some of his former associates and letting them know that when it came to mold changes, there was an 11-machine shop in Western Michigan that could best them.

“They were just glowing,” Klahorst says of his crew. “The real difference to us is that we didn’t go out there and write a bunch of standardized work for them, which is what we’d have done in the past. We allowed them to take their creativity and innovate. It was their project, not ours.”

One of Shape’s most recent additions is a 2500-ton Combi M press from Engel, which uses dueling injection units to run two molds concurrently. Shape plans to run two 1+1 tools on each side for four separate door carriers simultaneously.