Ask tooling managers to identify their “problem child” tools, and they can quickly rattle off a list of their shop’s difficult molds and each one’s particular issues. William Duffield, tool room supervisor at Erwin Quarder Inc., Grand Rapids, Mich., is no different. After coming to the custom molder at the end of 2017, he sought out the company’s most headache-inducing molds as he worked to augment the company’s preventive-maintenance program. 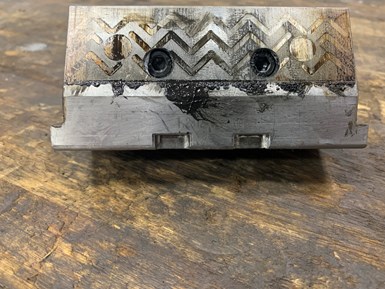 This mold component has approximately 20,000 cycles on it, with the grease still intact and lubricating as designed.

Erwin Quarder is a full-service injection molder with 32 presses from 50 to 400 tons and just under 100 employees. A primary line of business is overmolding electronic leads for the automotive sector, and most parts are fit-in-the-palm-of-your-hand small. The Michigan plant is a wholly owned subsidiary of Erwin Quarder Systemtechnik GmbH in Germany, which also has facilities in Mexico and Asia.

The first troublesome tool targeted by Duffield was a two-cavity mold he described as a basic open/shut design with two sets of slides. Grease was used to keep the slides moving, but over time, the processing temperature of 350 F liquefied the grease, forcing the shop personnel to apply more. Eventually building up and caking on, the grease led to myriad molding issues, including poor shutoff and resulting flash; clogged vents and burns; and excessive buildup, leading to broken mold components. All these in turn caused excessive unscheduled downtime.

“We would have to clean the tool, pulling it out and doing a full preventive maintenance on it,” Duffield says. “Obviously, if the tool’s not making parts, we’re not making money. The tool was actually having trouble opening back up because of the lack of grease. The old grease would wear right out, and then you were steel on steel with no lubrication.” Duffield says the weekly shutdowns took up to 4 hr as the tool room was forced to clean out the mold and re-grease. 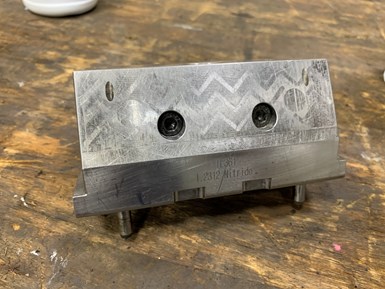 The same component after cleaning. Erwin Quarder is undertaking a study to see how long it can run this tool under continuous operations.

At his previous job, Duffield had become a user of products from Nanoplas Inc., including its Syn-Lube synthetic, food-grade grease, which boasts high-temperature and water resistance, as well as pressure protection. Duffield requested some Nanoplas product samples and undertook a two-week study with the difficult die.

Starting with a “fresh, clean tool,” the tool room applied Syn-Lube and saw an immediate impact, according to Duffield. “We regained that 4 hr of production time throughout the week,” Duffield says, “and our parts looked better because the Syn-Lube is not caking up and getting on the parts and causing shutoff issues.” In addition, Duffield says the plant is using less grease overall, cutting back on the amount initially applied and not having to re-apply more mid-run.

Erwin Quarder was so pleased with the Syn-Lube grease, it incorporated other Nanoplas products into its preventive-maintenance program, including Zap-Ox stain remover, Power Clean degreaser and Defender rust preventative. “We actually use Nanoplas products on every tool in the building,” Duffield says. That’s true for tools in production, maintenance and storage, where it gets more benefit from using less of the Defender rust preventative on molds placed back on the rack.

“By using less rust preventative, we’re not having the sticky residue on the mold after it sits for a period of time,” Duffield says. “The result is less clogged vents and less residue on the first shot.”