This is the seventh in a series of blogs based on 2019-2020 research conducted by market-research firm Mastio & Co., St. Joseph, Mo. on key markets for processors of polyethylene film. There will be 10 articles in all. The first five will offer Mastio’s analysis—based on interviews with processors conducted direct by the Missouri firm—with film processors representing the five largest PE film markets. The second batch of five will be focused on the five fast-growing PE film markets.

The first of these blogs analyzed the stretch film market. The second focused on consumer/institutional product liners. The third discussed T-shirt bags. Next, we looked at the institutional can liner market, then the consumer trash bags. Last week, we focused on Mastio’s findings in the bubble-wrap market, which is among Mastio’s five fast-growing PE film market segments. Here we look at another fast-growing market: sheet and tubing, or converter film.

PE sheet and tubing film, also referred to as converter film, is a film that is designed to be utilized or converted into a multitude of different end-use applications or products. Sheet, as referred to here, is film manufactured in gauges of less than 12 mils and sold to film converters, industrial end-users, or wholesale packaging distributors in the form of rollstock. Tubing is film that is produced with the blown film extrusion process and sold as layflat tubing on a roll. Tubing can be partially prefinished, such as gusseted tubing.

Due to the diversity of applications for the film in this market, nearly every conceivable market category within this study can use film that originates as sheet and tubing. 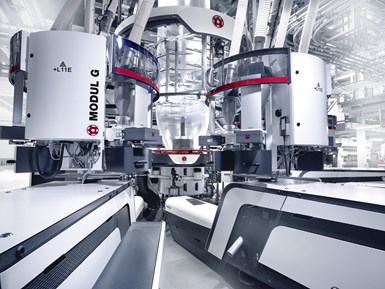 Several film extrusion companies are periodically involved in the sheet and tubing market. They manufacture sheet and tubing on an as needed basis to utilize excess capacity during slower periods of demand for other traditional PE film products. Other PE film extrusion companies reported manufacturing sheet and tubing intermittently, according to specifications by film converters or end-use customers. Some participants in this market extrude film only, while others extrude film and convert film into various packaging products.

During 2019, the six largest participants in the sheet and tubing market were as follows: Sigma Plastics; Emballages Polystar; Mid-South Extrusion Inc.; Imaflex Inc.; Novolex; and Berry Global Group, Inc. Collectively, these companies consumed approximately 440.2 million lb of PE resin for this market in 2019.

Medium molecular weight-HDPE (MMW-HDPE) and high molecular weight-HDPE (HMW-HDPE) resins are extruded solely, in blends, or in film coextrusion with LDPE and LLDPE resins. HDPE resins allow even further downgauging, while providing even greater film strength than LLDPE resins. HDPE resin is also utilized as an additive in blends with LDPE or LLDPE resins, or as a processing aid to add stiffness and increase bubble stability in blown film extrusion. This is especially helpful in bubble diameters greater than 80 in. Additional benefits of utilizing HDPE resin are added barrier properties, excellent environmental stress crack resistance (ESCR), and greater ease for converting the film into finished bags or sacks. However, when implementing HDPE resin, some film clarity is sacrificed. 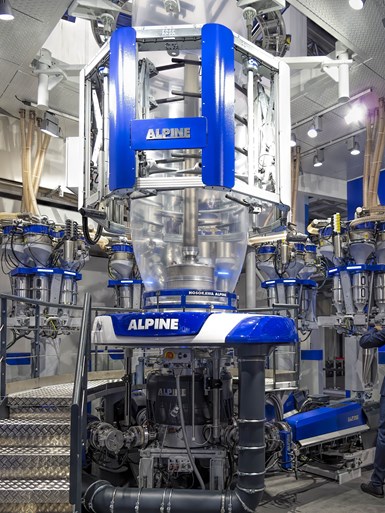 Improvements in both film coextrusion and PE resin technologies have greatly increased the sophistication of PE films. A greater variety of film characteristics are now possible, such as a three-layer form, fill and seal sheeting with different levels of coefficient of friction (COF). The film can have outside high cling, inside high slip, and a sandwiched layer of LLDPE resin manufactured using the metallocene single-site catalyst process (mLLDPE). The high cling side helps prevent the packaged product from shifting or slipping after being stacked. The one side high slip allows greater ease of inserting the product into the package. The inner layer of mLLDPE resin allows faster production rates by affording greater hot tack strength than conventionally produced PE resins.

Film downgauging is another advantage of film coextrusion technology, by allowing film processors to combine low density PE (LDPE) resin with stronger LLDPE or HDPE resins. Coextruded sheet and tubing film ranged from two-layer to eleven-layer constructions, with the three-layer structure being the most typical.

According to numerous North American packaging experts, approximately 40% of plastic consumption is within the consumer packaging industry. The general economy has an impact on most, if not all, of the PE film markets. Participants in the sheet and tubing market seem to feel optimistic about the state of the economy, however, some express concerns about the effects of the upcoming presidential election and how politics may affect economic conditions. Improved economic conditions during 2019 have caused expectations for demand to at least remain steady or slightly improve in the foreseeable future.

Some of the added benefits of form, fill, and seal packaging film over prefinished bags include better seal capabilities, greater flexibility in package shape and size, and reduced inventory levels of prefinished bags of various sizes.

Another trend to track is the switch from multi-material structures to all PE for the stand-up pouch market.