Don’t assume you know everything there is to know about PE because it’s been around so long. Here is yet another example of how the performance of PE is influenced by molecular weight and density.
#bestpractices #polyolefins

Before we leave the topic of polyethylene grade selection, it may be productive to look at one more practical example of how the performance of PE is influenced by the dual considerations of molecular weight and density. This case study involves a relatively large molded part that was being produced in a variety of colors in an HDPE with a melt-flow rate of 7.0 g/10 min and a density of 0.952 g/cm3. Periodically the supplier of these parts would receive complaints from the field about cracking. It was assumed that these cracks occurred due to relatively high mechanical stresses that were part of the application. 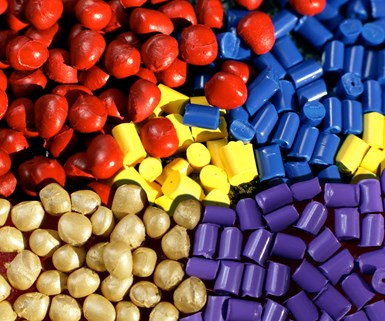 HDPE parts colored with masterbatches were cracking due to gradual increase in crystallinity after molding. Only parts colored black to hide mixed-color regrind used a high enough level of black LLDPE masterbatch to effectively lower the average density of the parts, reduce crystallinity and avoid cracking. (Photo: Chroma Color)

However, when this problem became significant enough to start tracing it back from the field through the manufacturing process, a review of parts in inventory showed that cracking was occurring spontaneously in parts that had never been in service. It was further determined that parts that had been recently molded were free of the defect, but parts that were older did show evidence of cracking, and the older the parts were the more extensive the cracks appeared to be.

This is not an uncommon problem in PE. The combination of stresses from poor design elements such as sharp corners and rapid changes in wall thickness coupled with the ability of the material to increase in crystallinity over time produces a condition where the inherent strength of the material is exceeded and cracks begin to form. Over time these cracks can grow to be significant. The problem is almost always related to the density of the material being too high.

When the various colors were examined it was found that all colors were susceptible to this failure mode, with the exception of black. So, what was different about the black material? It turns out that black parts were molded from a mixture of reground colors that were then made black by the addition of a color concentrate. This concentrate was based on LLDPE. In actuality, all the colors were produced using concentrates based on LLDPE. But coloring natural material only required a letdown ratio of 2 lb of concentrate per 100 lb of natural. Getting a good black color when using a mixture of colors required a much higher concentrate loading.

Adding this concentrate at the level needed to achieve a satisfactory color was effectively reducing the density and therefore the crystallinity of the material, making it less susceptible to brittle failure. Although it is often the case that a reduction in density results in lower strength and stiffness, in this case a lower density did not compromise the performance of the parts because the nominal wall of the part was relatively thick. There was no noticeable difference in the load-bearing performance of the black parts compared with any other color.

This pointed to a solution for the other colors. A recommendation was made to reduce the density and, if possible, increase the average molecular weight of the material used to produce the parts. Often it is important to the processor that they can remain with a given material supplier, so the product line for that supplier must be reviewed for viable options. For this particular product line, the next step down in density was to 0.946 g/cm3 and a grade with this density was available with a melt-flow rate (MFR) of 5.0 g/10 min.

This provides the opportunity to make two changes that both improve the toughness of the material. The lower MFR is associated with an increase in the average molecular weight of the polymer and the lower density provides a reduction in the crystallinity of the part. Given the relatively small change in MFR, it is anticipated that an improvement in performance will be attributable primarily to the reduction in density. As expected, the short-term mechanical properties of the part were not altered in any noticeable way.

The problem now becomes one of verifying that the change that was made is sufficient to solve the field problem. It was determined that at room temperature, spontaneous cracking of the parts molded in the higher-density material occurred in about 12 months. Exposure to elevated temperatures is often used to accelerate a failure and allow for a rapid determination of fitness for use.

In this case, parts molded in the higher-density material were placed in an oven set at 93 C (200 F). Cracks began to appear in these parts in a little less than 8 hr. It is tempting in situations like this to establish an equivalence between the elevated temperature and room temperature without establishing the mechanism for the acceleration. In PE, exposure to higher temperatures can promote multiple processes that can lead to cracking. One of these, and the one that is of interest here, is an acceleration in the rate at which additional crystallization occurs. However, other processes such as oxidation can also contribute to a loss in toughness. So, it is important to establish that the old material and the new material contain sufficient stabilization so that oxidation cannot occur.

In PE, exposure to higher temperatures can promote multiple processes that can lead to cracking.

Assuming that this is done, tests on the new material with the lower density and the higher molecular weight can be performed as a comparison. In this case, the new material did not show cracks until the aging time reached 130 hr, about 16 times longer than in the original higher-density material. This represents a single data point generated at a relatively high temperature. In order to establish a reasonable calculation for an anticipated lifetime for the new material, it is advisable to perform this comparison at one or two additional temperatures in order to determine whether this 16-fold improvement can be relied upon.

But even if the degree of improvement is somewhat more modest, the results of these tests indicate that lowering the density of the material by a relatively small amount will likely extend the life of the product to a very significant degree. In addition, the lower density and higher average molecular weight of the new material will provide for improved performance under the influence of the stresses associated with field use.

This is one more example of the importance of understanding the role of molecular weight and density in selecting a PE. Too often we refer to materials as commodities because of their relatively low cost. This gives the impression that we don’t need to put much thought into the selection process. And after 80 years of using PE we perhaps assume that we know everything there is to know. But the experience of dealing with field failures suggests that we have a lot to learn.

ABOUT THE AUTHOR Mike Sepe is an independent, global materials and processing consultant whose company, Michael P. Sepe, LLC, is based in Sedona, Ariz. He has more than 40 years of experience in the plastics industry and assists clients with material selection, designing for manufacturability, process optimization, troubleshooting, and failure analysis. Contact: (928) 203-0408 • mike@thematerialanalyst.com.