Prices increased for each of the major five volume resins, though there was a possibility that they would plateau this month for PP, PS and PET. A key factor behind all these increases was feedstock costs. In addition, prices of  PE and PVC were also driven upward by strong domestic and export demand. Other factors affecting nearly all five volume resins included planned and unplanned feedstock and/or resin plant outages, tighter inventories, and some prebuying activity amidst the hurricane season. Weather-related uncertainties and issues related to COVID-19, including labor shortages, continue to be the “wild cards.”

Polyethylene prices moved up 5¢/lb in July following implementation of the June price increase, for a net rise of 9¢/lb year-to-date. Moreover, suppliers issued a 5¢ hike for August, and at least partial implementation was plausible, according to Mike Burns, RTi’s v.p. of PE markets, as well as PCW senior editor David Barry and The Plastic Exchange’s Greenberg.

Burns noted that the combination of strong consumer demand, low inventories, strong exports and hurricane fears may support the newest increase. “People are looking for resin to meet demand, and you have some prebuying due to the hurricane season. Production rates exceeded 95% of capacity and demand rates neared 100%.” Burns said he’d be surprised if the entire August increase did not go through and noted that PE film processors were aiming to raise prices by 6% going into August. PCW’s Barry ventured that August prices could be flat to modestly higher based on spot prices. Expecting PE prices for the rest of the year to be flat at best, if not higher, these sources speculated that suppliers might refrain from pushing for another increase this month. However, Barry cautioned that “oil prices moving up and/or a hurricane event that results in production shutdowns would result in further increases.” 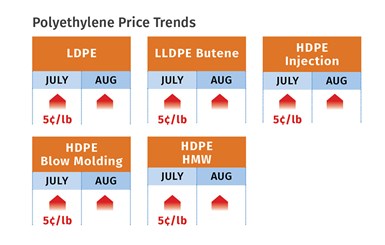 These sources reported that spot PE prices rose through July, settling just below contract prices. Greenberg characterized the spot PE market as “sizzling” at the end of July, with a high volume of resin changing hands. “Availability was tight for some grades like LDPE film, LLDPE injection and HMW film, while few prime railcars of any grade were made available. A series of turnarounds, outages and delays, coupled with thinning upstream inventories resulting from massive exports, has placed the supply/demand balance in a tight situation.”

These sources also noted that exports appeared to be slowing as prices moved up. Barry put it this way, “In China, which has absorbed an above-average volume of U.S. PE in recent months, industrial production was said to be slowing after an initial post-lockdown restocking sprint, and local markets were well supplied with imports from the U.S. and elsewhere.

PP Prices Up for Now

Polypropylene prices rose 6¢/lb in July, in step with propylene monomer, which settled at 32.5¢/lb. PP prices were expected to move up again in August in step with another sizable monomer increase, according to Greenberg, Barry and Scott Newell, RTi’s v.p. of PP markets. Moreover, PP suppliers were seeking a 3¢/lb “margin increase” on top of any change in the August monomer contract price. Newell thought it unlikely that suppliers would realize any margin expansion, while Barry ventured that partial implementation was possible.

Newell noted that this upward trajectory is entirely cost-driven, with several planned and unplanned monomer outages continuing through at least this month. However, he also noted that PP demand has remained below par. In contrast, export demand has nearly doubled, with suppliers selling excess materials at very low prices through June and July. Still, Newell predicted that this trajectory would be relatively short-term. “We have moved from having the lowest-priced to having the highest-priced PP in the world. So we are creating demand destruction here. As monomer supply moves up, suppliers will need to go after exports. Expect September PP prices to start coming back down.”  In the first week of August, Barry reported that export offers had disappeared, and there was talk of import offers. 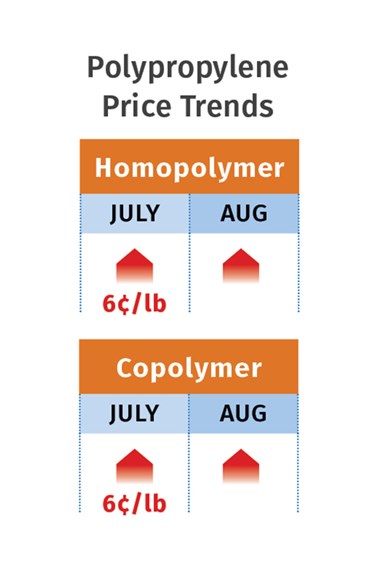 Greenberg reported very strong spot PP trading in late July, as buyers rushed to the spot market to secure material because they saw some recovery in their markets and sensed still higher prices ahead. Both he and Barry noted that PP spot prices continued to rise as the market reacted to tighter resin supply and monomer cost increases. Barry expects that startup of Braskem’s 992 million lb/yr  Delta line in La Porte, Texas, will play a big role in the market’s supply balance in the remaining third quarter.

PS Prices Up, Then Flatten?

Polystyrene prices moved up another 3¢/lb in July and two major suppliers announced increases of 3¢/lb for August, which were expected to be at least partially successful. This comes despite lackluster demand and supplier plant operating rates of 51%, according to PCW’s Barry and Robin Chesshier, RTi’s  v.p. of PE, PS and nylon 6 markets. This upward trajectory is entirely driven by feedstock costs, with benzene in the lead. August benzene contracts settled 25¢ higher at $1.53/gal, which translates to a 2¢/lb production cost increase for PS. 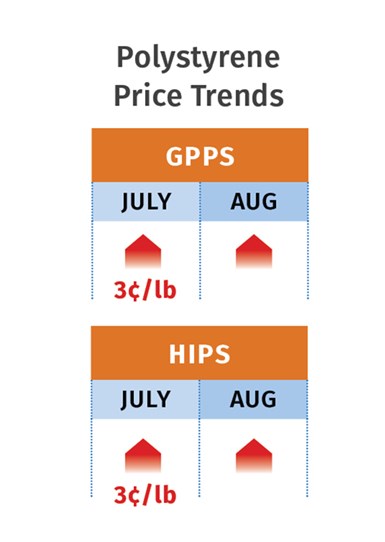 Late-settling July ethylene contracts moved up 3¢/lb (though ethylene is only 25% of PS production cost), and styrene monomer spot prices were also higher, according to Chesshier. The implied styrene cost based on a 30/70 ratio of spot ethylene/benzene was at 19.5¢/lb, up 7¢/lb over the previous month, reported Barry. He ventured that this month’s PS prices would be flat as benzene supply become more balanced. Chesshier noted that since September is typically a strong demand month for exports to China, she would not be entirely surprised to see another hike.

PVC prices were expected to rise 2¢/lb in July and possibly another 2-3¢/lb in August, following implementation of the June 3¢ hike, according to both Mark Kallman, RTi’s v.p. of PVC and engineering resins and PCW senior editor Donna Todd. At least two suppliers upped their original August 3¢ increase to 4¢/lb and both these sources saw potential for implementation of the latter in August or split between August and this month.

Todd reported that many buyers were expecting suppliers to issue price hikes for September and even October. “They think suppliers will keep announcing price increases until doing so no longer works. This year’s contract season is expected to be more contentious than usual, which no doubt adds to producers’ desire to push prices as high as possible before the upward momentum fails.” 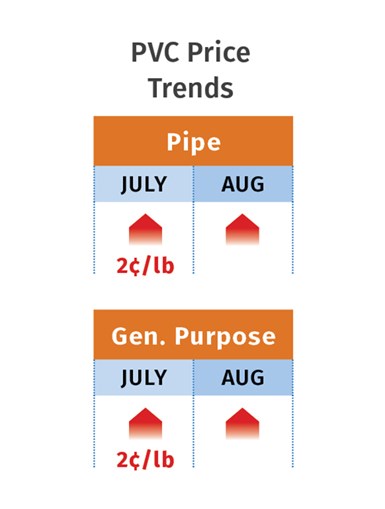 Factors noted by Kallman that support suppliers’ actions include a relatively robust recovery in the construction arena, driven by low interest rates and home remodeling; tighter supply due to unplanned and planned outages; and increased export demand and prices.

PET Prices Up, Then Flat

PET resin prices moved up 2¢ to 4¢/lb at the start of August, driven by strong demand for single-use PET plastic bottles, containers and packaging, according to PCW senior editor Xavier Cronin. Railcar business in the first week of August was in the mid-40¢/lb range delivered to the South and Midwest. He expected prices this month to level off in the mid-to-high 40¢/lb range delivered, for railcar and truckload business, as supply and demand move back into relative balance. 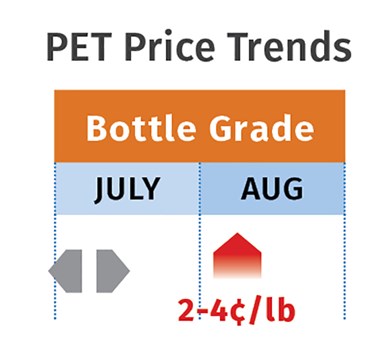 “The increase in demand is the result of the COVID-19 pandemic, which has caused people across much of the country to spend more time at home due to work-at-home requirements and social distancing. This in turn has increased demand for food and beverages packaged in PET, both at retail outlets and for food delivery,” reported Cronin. He also noted that prices for PET raw materials such as paraxylene and PTA moved up in July due to rising oil prices. At the same time, PET imports continue to enter the country from around the world. This has given buyers multiple sources, keeping a lid on rising prices,” reported Cronin.