As the third quarter was coming to an end, prices of nearly all volume resins were higher or heading that way. But flat or even lower prices are seen ahead.
#polystyrene #pvc #pet

As the third quarter was coming to an end, prices of nearly all volume resins were higher or heading that way. Going into the fourth quarter, with the exception of PE, the trajectory was largely projected to be flat, and in some cases downward. Although contributing factors varied, they included supply tightness due to planned and unplanned production disruptions, higher feedstock costs, and incremental recovery in domestic demand. Also at play was the wild card of the hurricane season.

While precautionary shutdowns as Hurricane Laura made landfall in the U.S. Gulf Coast did cause some blips in production and, some force majeure actions, nearly all were very short-term. Particularly in the case of polyolefins, the production disruption added to upward pricing pressures. Rising prices were putting a damper on exports, which were quite strong earlier in the summer—particularly for PE and PVC—though a general trend toward more stable or lower prices is considered likely to recapture some of that business.

Polyethylene prices rose 5¢/lb in August, for the third consecutive month of price hikes Suppliers were aiming for a fourth increase (5¢ again) for September, a move that appeared to be linked to actual and potential weather-related events, according to to Mike Burns, RTi’s v.p. of PE markets, PCW’s senior editor David Barry, and The Plastic Exchange’s Greenberg. 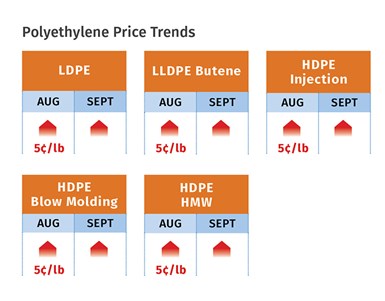 Both Barry and Greenberg reported at August’s end that spot material was scarce, and further scarcity was expected through at least September, lending support to the latest price hike. “While exports have remained relatively strong, especially by historical standards, rapidly rising prices should crimp incremental sales, which will help provide more material to the domestic market,” reported Greenberg.

Burns ventured that if the September price increase was not implemented immediately, it would be pushed into this month. He added that while suppliers’ July inventories were reduced to a two-year low, August data was expected to show a minor drawdown. Still, he saw PE prices on an upward swing until year’s end, with perhaps some potential relief in November.

PP Prices Up for Now

Polypropylene prices moved up in August by 3.5¢/lb, in step with propylene monomer, but PP suppliers were also aiming to implement a 2¢/lb margin increase. Scott Newell, RTi’s v.p. of PP markets, as well as PCW’s Barry and The Plastic Exchange’s Greenberg, all expected that suppliers would succeed in implementing margin increases. Said Newell, “The market will see an additional 2¢/lb, and possibly even 3¢/lb, in the August-September time frame.” These sources attribute this to a very tight market, with low supplier inventories due to both planned and unplanned monomer and polymer shutdowns, as well as a rebound in domestic demand and production rates that have hovered at only about 82% all year.

At the same time, both Newell and Barry expected September to have been a transition period for resin pricing, with October prices forecasted to be flat or even lower. Both sources cited the restarting of monomer units, which will lead to improved availability and lower prices and the need for a correction of PP prices in order for suppliers to re-enter the export market. Newell said fourth-quarter PP tabs are likely to drop around 5-6¢/lb. 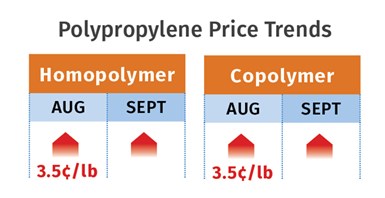 Both Greenberg and Barry characterized spot PP trading as active but with limited resin availability and prices that had moved up by another 2¢/lb going into September.

PS Prices Up, Then Flat

Polystyrene prices rose another 2¢/lb in August, following a July 3¢ increase, and driven by higher feedstock costs, according to PCW’s Barry and Robin Chesshier, RTi’s  v.p. of PE, PS and nylon 6 markets. Benzene contracts moved up 25¢/gal, and spot ethylene prices gained 7¢/lb. August ended with the implied styrene cost based on a 30/70 ratio of spot ethylene/benzene at 20.6¢, up 1.1¢/lb from the previous four weeks, according to Barry.

However, both sources generally expected an end to this climb that has been driven entirely by feedstock costs, given continued lackluster demand and plant operating rates of only about 70%. Citing a declining price trend for both spot benzene and ethylene going into September, these sources thought that both September and October PS prices would most likely be flat—barring a spike in benzene prices due to planned turnarounds.

PVC Tabs Up at Least Temporarily

PVC prices gained 3¢/lb in August, after a 2¢/lb increase in July, and suppliers issued a 3¢/lb increase for September, which was expected to go through, according to both Mark Kallman , RTi’s v.p. of PVC and engineering resins and PCW senior editor Donna Todd. Kallman ventured that October PVC pricing could be flat, barring another production disruption.

Part of what is driving PVC price hikes is low supplier inventories—down 40% in July, year-to-date, due to constricted production. However, PVC production began to slowly improve since the second quarter, and the temporary blip of shutdowns during the late-August Hurricane Laura event was not expected to have long-lasting effects. 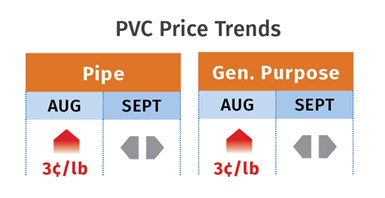 While higher PVC prices could result in lower exports, domestic demand for construction has been strong and would continue at least through September, according to Kallman. Similarly, Todd reported that the expected success of announced price increases was based on PVC market tightness, rising ethylene prices, and strong downstream demand, even before the shutdowns caused by Hurricane Laura.

PET monthly contract prices for multiple railcars in August were 2¢ to 5¢/lb lower; but spot prices (delivered) ended that month in the mid-40¢/lb range, up 2-5¢/lb, according to PCW senior editor Xavier Cronin.  Demand for PET to produce bottles and containers has been strong since the COVID-19 outbreak in March. 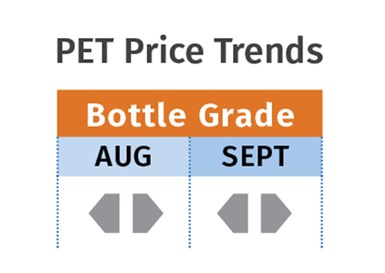 By the first week of September, PET prices were steady and Cronin expected them to remain flat into this month. He predicts that robust U.S. production and abundant imports will keep prices flat in the mid-40¢/lb range.

ABS Rises Then Levels Off

Prices of ABS moved up 1-2¢/lb in August and were likely to gain another 1-2¢/lb both in September and October, according to RTi’s Kallman. He ventured that prices would level off as we approach 2021. He attributed the increases to higher costs of feedstocks benzene and butadiene. Global demand for appliances and electronics, particularly in Asia, has been strong, and automotive is gradually improving. Still, he saw 2020 ending with a drop in domestic demand of around 10%.

Polycarbonate prices dropped a bit further in the third quarter’s first two months after having dropped by at least 5-10¢/lb in the second quarter. RTi’s Kallman said PC prices would be flat in September and into the fourth quarter. He noted that PC exports to Asia and Mexico were fairly level, though domestic demand, which was recovering for major automotive and construction markets, saw a 10-20% drop, primarily from automotive.

Prices of Nylons 6 and 66 Down

Nylon 6 prices in July-August were largely flat, following a drop of 5-10¢/lb in the second quarter, according to RTi’s Chesshier. The market was oversupplied, with depressed demand from automotive and fibers sectors, making it difficult for suppliers to push prices up despite some feedstock cost increases. BASF issued an 8¢/lb increase for September, and other suppliers were likely to follow suit but by not as much, noted Chesshier. She foresaw a possibility of a partial increase before the end of the third quarter, noting suppliers typically have some leverage during hurricane season; but she expected flat pricing through the fourth quarter, barring a disruptive global event or a spike in benzene prices.

Prices of nylon 66 dropped 5¢/lb in June-July after dropping 5-10¢/lb in the second quarter’s first two months, according to RTi’s Kallman. Some suppliers had issued price hikes of around 6¢/lb, attributing it to potential hurricane production shutdowns, but the move was mostly seen as a measure of stopping further erosion. Kallman said fourth-quarter prices would be flat to slightly up, depending on production issues. While he saw a recovery in demand ahead, he noted that demand for automotive alone was down 10-20%, while supply remained ample.