It doesn’t take long to recognize that there’s something different about T&M Enterprises. At first glance, the picture may not seem all that remarkable: small, family-owned and run custom molder with 16 injection machines from 27 to 200 tons in a 28,000-ft2 plant in Shaftsbury, Vt. The “T” and “M” in the name stand for the founder, Tom Paquin, and his wife Marty. In business since 1983, the firm molds standard parts for electrical capacitors (its original specialty) as well as medical parts, plumbing components, handles for paint and pastry brushes, nylon handcuff ties for the military, small automotive parts, and a proprietary line of votive candle cups in clear or colored PVC (others use more expensive polycarbonate)—11 million candle holders a year.

A closer look begins to reveal interesting details. All the electric, air and water lines are under-floor. The machines are organized into cells with interchangeable components—“so we’re not limited to any certain product line or specialty,” notes T.R. Paquin.

Still more interesting: The plant gets 70% of its electricity from solar panels. Soon, an off-site solar array will take T&M off the grid entirely. In the winter, snow can cover the panels and cut their power generation to little or nothing, but T&M “overproduces” during the summer and “banks’” credits with the local utility for the winter months.

“Not many other molders trust their machines enough to do lights-out molding.”

Here’s where it really gets intriguing: To run those 16 injection machines, T&M employs just eight people. The company runs half the second shift with just one worker to pack parts and fill hoppers, while the third shift is entirely “lights out”—and has been since the shop opened in 1983. Back then, machines could monitor positions of the screw and molds with limit switches and could shut themselves down, if necessary. Today, “Every action of the press is monitored by distance, time and even system pressure,” observes T.R. Paquin. “The press can shut itself down for probably over 50 different faults—too much pressure needed to fill, too much time to reach a stroke distance, even too high or low barrel temperatures. Today’s presses can even sense a piece of bubble wrap that might get between the moving plates of the tool and can shut down before the bubble pops. That means that if a molded part hangs up in the tool, the controls can prevent damage to the tool or press.”

“Not many other molders trust their machines enough to do this,” muses Tom Paquin. But he has had that trust ever since he started out with three Battenfeld presses. He has stuck with that brand exclusively, transitioning to the newer Wittmann Battenfeld models when the machine builder changed hands in 2008.

Wittmann Battenfeld today is a strong advocate of cell integration via its “Wittmann 4.0” technology. But T&M has had its own version of cell integration for the last five to 10 years. Recalls Tom Paquin, “We added contactors and pigtails to our presses. We would plug all our auxiliary equipment—dryers, conveyors, granulators, etc.—into the press. They were tied into the press motor, and if the motor stopped, so would our auxiliaries. I won’t lie, we did come in some mornings to some nice messes—like if a conveyor motor stopped working and hours’ worth of parts piled up on the floor.”

T.R. Paquin adds, “Today, everything, including auxiliary equipment, is monitored through Wittmann’s software, and parameters for all equipment can be saved for the next time you run a specific tool. Press a few buttons, and all of those saved settings are recalled, instead of manual setup and inputting all those setpoints.” 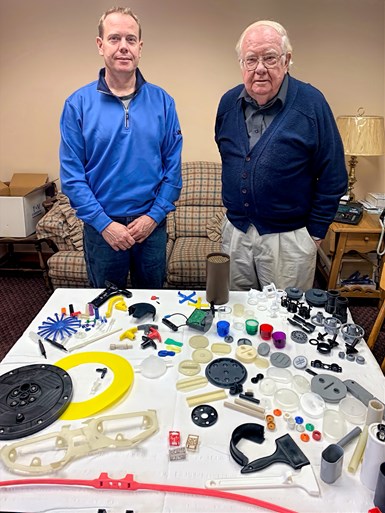 Tom and T.R. Paquin with samples of their production.

T&M adds or replaces a press almost every year, keeping its fleet up to date in energy efficiency (replacing older hydraulic units with servohydraulic models), speed and controls. The company’s newest purchase, a 25-ton SmartPower press, arrived last December to replace a 1996 Battenfeld machine. “That machine was over 20 years old, and ran around the clock with no problems,” Tom Paquin notes. “But there is no way a 20-year-old machine can compete with the technology available today.”

For example, moving a candle-cup mold from an older 80-ton press to a new machine cut the cycle time from 42 to 27 sec, enabling an increase in production without additional tooling. And T&M values the ability of Wittmann Battenfeld B6 and B8 controls to allow Wittmann technicians to access the controls remotely. “If we have a problem, they can look into the controls and see what the machine is doing and diagnose issues,” says T.R. Paquin. “It’s a very useful and time-saving technology, instead of a lot of back and forth on the phone or having them send a guy out to visit us.”