What ‘Cobots’ Can Do for Blow Molders

Low-cost and easy-to-program collaborative robots are a new solution to bottle handling, trimming and packing automation.

Collaborative robots are providing new opportunities to free workers from repetitive tasks in blow molding operations, while also allowing manufacturers to increase output and quality. “Cobots” offer the versatility of a traditional six-axis robot, but bring additional advantages in terms of significantly lower cost and complexity as well as the ability to work safely in proximity to humans without guarding. New blow molding systems are using cobots in production equipment as well as in finishing, packaging and palletizing applications.

Cobot inside the machine

At K 2019, BBM demonstrated a new all-electric shuttle blow molder for stackable jerrycans. Inside the machine is a Universal Robots six-axis cobot for takeout and trimming.

Inside the BBM machine, the UR cobot transfers parts from the mold to a trim station, laying them down for a vertical punch, which makes flash easier to collect than if containers were left upright.

Collaborative robots are named for their ability to work safely in close proximity to humans (with a proper risk assessment) and other equipment. This collaborative nature allows humans to share the cobot’s work area for upstream or downstream operations, such as quality inspection or other tasks that require human dexterity or decision making. Because cobots can easily interact with other machinery and robots, they are often more productive than using either conventional robots or human operators alone. In fact, a study completed by MIT for the Financial Times of London concluded that the combination of cobots and human operators delivers 85% more productivity.

Blow molders are now looking into cobot automation to take over manual tasks they simply can’t staff. With record-low unemployment rates, we’re seeing companies consider automation more than ever before. The National Association of Manufacturers’ (NAM) latest Outlook Survey confirmed that finding skilled workers remains one of the top challenges for manufacturing executives today. And the Society of Manufacturing Engineers (SME) reports that 89% of manufacturers are having difficulty finding skilled workers.

This situation does not appear ready to improve anytime soon with 10,000 baby boomers retiring every day and younger generations skeptical about jobs in manufacturing. Asked how they were addressing the skills shortage, manufacturing executives’ responses to the NAM survey ranged from assigning more overtime (70.3%), relying more on temporary staffing services (57.7%), and encouraging possible retirees to stay longer in their roles (30.7%)—all strategies that adversely impact the bottom line. An additional 28.8% reported they had to turn away new business or had lost revenue opportunities because of workforce constraints—ones that cobots can help address.

When properly implemented after a risk assessment, cobots typically don’t require the heavy, expensive, and bulky safety guarding that is associated with conventional robots. Lightweight and easy to set up and program, cobots are often treated as a manufacturing tool, moved from machine to machine as the production mix and schedules demand. Cobots have been mounted on rolling bases or carts and wheeled into position for short runs.

Other installations use magnetic bases or a high-precision collet mounting to enable cobots to be moved from machine to machine. With a small footprint and no bulky safety guarding, even floor- or pedestal-mounted installations can free up floorspace. Cobots are also being incorporated directly into blow molding equipment cells because of their compact size and flexibility.

Ease of programming is another key reason for incorporating cobots, with easy setup and interfacing to molding machines and other peripherals, as well as easy redeployment for new production needs. With no special software language to learn, employees are successfully implementing cobots with no prior robotics experience. That makes operating costs low enough that collaborative automation is within reach for small and medium-sized operations. In addition, pre-certified peripherals such as grippers and vision systems dramatically simplify what would traditionally have been a complex automation initiative.

BBM of Germany recently demonstrated at the K 2019 show a new all-electric, shuttle-type extrusion blow molding machine for stackable jerrycans (see Jan. ’20 show report). Installed inside the machine is an integrated six-axis collaborative takeout robot. The cobot (from Universal Robots) transfers parts to a trim station, laying them down for a vertical punch, which makes the flash easier to collect than if containers were left upright with a standard horizontal deflasher. Afterward, the cobot places containers upright on a conveyor. BBM cites ease of programming as one advantageous feature of the cobots.

Collaborative robotic systems are also seeing strong growth in blow molding due to the need for greater efficiency and automation downstream within the packaging line. Proco Machinery Inc. has developed packaging systems with collaborative robot arms to reduce the handling of containers, simplify operation, and enhance efficiency, all with a small footprint and fast ROI. The compact Proco Case Packers and Proco Half-cube Palletizers handle blow-molded containers at a significantly lower cost than conventional automation. By using collaborative robots, these systems can be placed alongside workers in constrained spaces such as assembly lines. Once again, these cobots require minimal training and are flexible and easy to redeploy for short runs.

Proco Machinery has developed packaging systems for blow molding, like this Half Cube Palletizer, with Universal Robots cobot arms to reduce the handling of containers, simplify operation, and enhance efficiency with a small footprint and fast ROI.

Proco’s Half-Cube Palletizer system, powered by a six-axis Universal Robots UR10 collaborative robot arm automatically palletizes blow molded containers with minimal operator involvement at half the cost of conventional automation solutions. With a reach of 51.2 in. and a payload of 22 lb, the UR10 cobot is well suited to palletizing containers.

The UR10 also powers Proco’s Robo Packer case packer, which is an integrated packaging module that also includes infeed conveyor and box conveyor, all mounted onto a sub-frame that can be quickly moved into position, set up, and put into production. The compact unit fits between blow molding lines for pick-and-place, assembly and packaging applications. The cobot can package bottles inside a box or on trays in configurations such as necks up, necks down, alternating rows of necks up and down, or layflat of bottles inside the box. 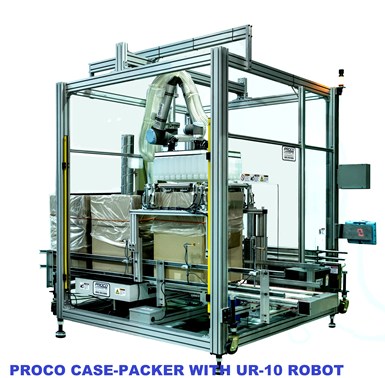 Proco Machinery’s Robo Packer has an integrated UR10 cobot. The case packer is an integrated packaging module that also includes infeed conveyor and box conveyor mounted onto a movable sub-frame.

Advantages of Automation, Without the Costs

Collaborative automation offers all the expected advantages of traditional robots, including increased output due to round-the-clock operation, improved consistency and quality, and reduced scrap. But with reduced or eliminated costs for safety guarding and programming and implementation, and project schedules measured in weeks not months, cobots bring those automation advantages to blow molding at about half the cost of conventional robots, and routinely deliver ROI of less than 12 months.