I reported recently on my visit to the brand-new headquarters of Farrel Pomini in Ansonia, Conn., for the grand opening of the facility in April. The grand opening event included presentations summarizing the latest technical developments in Continuous Mixers and Compact Processors:

• As reported previously, the company is actively investigating new opportunities in compounding biopolymers such as PLA. Farrel Pomini equipment is seen as appropriate because of its “gentle” treatment such sensitive polymers, with low shear and short residence times.

• The new Farrel Pomini Synergy System, a common framework with common standards for integrating the company’s compounders with third-party equipment and controls in a processing line.

• All systems now have a VPN gateway for remote web-based support in real time. This system can enable Farrel Pomini engineers to adjust machine operating parameters and control limits “on the fly” while a line is running.

• The newly patented Self-Aligning Seal (SAS) for the feed end of a Continuous Mixer, which was introduced at NPE2015 and is now used on every new machine (and also retrofittable), has been supplemented with a Self-Aligning Viscoseal (SAVS) for the discharge end of the mixer (see image). Like the SAS, the SAVS automatically moves with the rotor to compensate for thermal expansion, rotor wear, and deflection of the rotor by the process material. The SAVS utilizes a melt film for sealing and incorporates a reverse screw thread to retain the melt and prevent leakage. The patent-pending SAVS is still in testing at the Ansonia lab and will enter field testing soon.

New Self-Aligning Viscoseal for the discharge end of a Continuous Mixer automatically moves with the rotor to compensate for thermal expansion, rotor wear, and deflection of the rotor by the process material.

• The Slotted Vent Plunger, also introduced in 2015, which provides a larger open area but reduced loss of material, is now standard on new mixers and is also retrofittable.

• A new Adjustable Mixing Dam (see image) provides an additional means of varying the amount of shear in the process. Its electronic adjustability eliminates changing out fixed dams between production runs. The company is experimenting with use of the adjustable dam in the upstream mixing chamber of the two-stage CPXL mixer (based on the Pomini LCM design). In this two-stage mixer, the first stage is normally used to combine feed ingredients without melting/fluxing, which occurs in the second stage after addition of further ingredients. But for specialty applications like halogen-free flame-retardant (HFFR) electrical cable, which require either high levels of fillers, special fillers requiring high shear, or heat-sensitive fillers and/or blowing agents, an adjustable dam could be used upstream to start melting in the first mixing chamber, so that additional fillers could be introduced to already melted material in the downstream mixing chamber.

• Farrel Pomini’s R&D on new mixing rotors includes development of a version that imparts a higher level of dispersive mixing. This High-Dispersion Rotor may borrow from the NST rotor design of Farrel Pomini’s Banbury batch mixers (produced by a separate business unit).

• Currently in lab testing is a higher-dispersion #15 rotor for CPXL/LCM machines. It represents a merger of Farrel and Pomini technologies, as the CPXL #15 rotor substitutes a Farrel-type mixing section for the Pomini LCM design in the downstream stage of the mixer.

• The company is exploring the concept of a Twin-Screw Pump for niche applications like PET black Masterbatch (BMB), which contains 30-40% carbon black. Farrel Pomini says it is very difficult to pump and pressurize such a compound, so it may be necessary to substitute a twin-screw for the current single-screw discharge extruder. To prevent oxidation of the PET melt, the mixer and extruder would be close-coupled to eliminate contact with air. The mixer would utilize the new CPXL #15 rotor with multiple adjustable dams.

New Adjustable Mixing Dam provides an additional means of varying the amount of shear in the process. 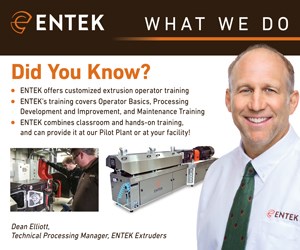 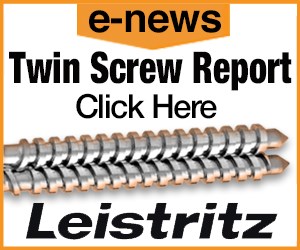