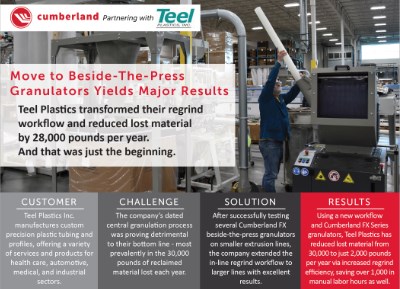 Looking to minimize the regrind touch points, Teel Plastics management consulted with Cumberland about their current challenges and the possibility of using beside-the-press (BTP) granulators. After an onsite analysis, they decided on a test that would feature Cumberland BTP granulators on one of their smaller lines.

The new workflow would allow scrap to be taken directly from the end of the line as it was produced, reground and transported via an evacuation system to the front of the line where it is discharged to a gaylord positioned next to the extruder. As soon as the gaylord was full, it could easily be move over a mere five feet to start using right on the line. This immediately eliminated several labor- and time-intensive steps and allowed more potentially scrap material to be used, cutting down on overall process waste. The company then decided to reconfigure six more lines using a similar BTP workflow for a total of seven.