Lanxess (Cologne, Germany) reported on March 16 that the Carbon 1 MK II smartphone being debuted this month by startup company Carbon Mobile (Berlin, Germany) has replaced plastics and aluminum with advanced composite materials. Said to be first carbon fiber smartphone, the base material for the production of the housing is a thermoplastic composite from the Lanxess Tepex dynalite product range, and is reinforced with 1K continuous carbon fiber filaments for a light, slim design that is made 5% less plastic.

“Our composite material, which we developed for lightweight components subjected to considerable mechanical stress, does more than just allow exceptionally thin wall thicknesses. In fact, with its high degree of strength and rigidity, it also helps to make the housing very robust for day-to-day use,” explains Philipp Genders, Tepex expert in application development at Lanxess. “In addition, the matte-black carbon fibers give the smartphone a truly high-tech look.”

However, Carbon Mobile says, use of carbon fiber initially had its challenges. The company notes that, despite their advanced properties for producing robust yet lightweight structures, carbon fibers are effective against electromagnetic shielding, which means that, rather than allowing radio signals to pass through, the material disperses them around the outer body of the device. Connected devices with carbon fiber, for this reason have been viewed as a road block by the tech industry. 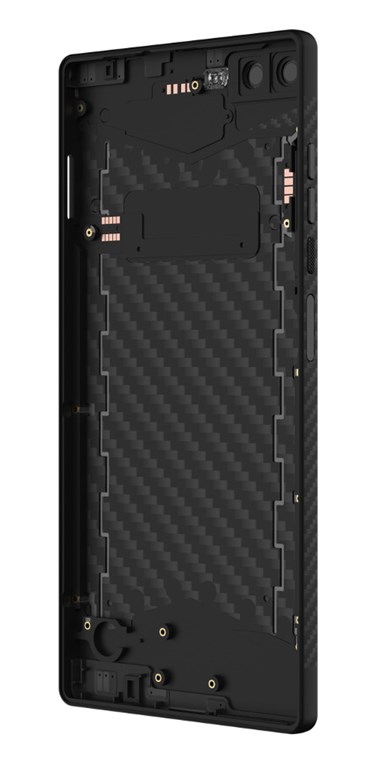 “Lanxess and their Tepex materials made the perfect partner in the development of HyRECM Technology,” say Eric Chan from processing partner Modern Composites Ltd. (Hong Kong, China) says. “Being able to work with a superior material from Germany ensures the best application possible of this revolutionary technology from launch.”

Following the same construction principle as the load-bearing chassis of a Formula 1 car, the housing is designed as a monocoque, or “single shell” for high rigidity. Carbon Mobile says this contributes significantly to the thin wall thicknesses, light weight of the smartphone and also enables miniaturization because there is no bulky reinforcement taking up space on the inside of the housing. According to Firas Khalifeh, CEO of Carbon Mobile, “Our cutting-edge monocoque design enables a device that weighs only 125 grams, a third lighter than conventional smartphones. At just 6.3 millimeters, it is also 25% thinner as well.”

Carbon Mobile adds that it is committed to sustainable principles. The new smartphone uses only recyclable materials wherever possible. “We want to deliver our contribution to cutting electronic waste and improving sustainability around the world,” says Khalifeh.

The composite material used for the housing can also easily be recycled and repurposed for new uses. “Like all products in the Tepex dynalite product line, it can be shredded and then processed on standard injection molding machines to make high-quality components, either by itself or mixed with suitable new material,” adds Genders. To extend the service life of the smartphone, all its components are designed to be easily replaceable for repair purpose, which also prevents electronic waste.