Eck Plastics Arts (Binghamton, N.Y.) has added a MA 9000 II S/6800 injection molding machine from Absolute Haitian, with the press’s 1012 tons of clamp force making it four times larger than the company’s next largest machine. The Mars is Eck’s first Haitian press, and it was chosen in part because of its automatic tiebar puller. The facility’s 11-ft ceiling and the machine’s height of 9 ft, mean Eck will be loading tools into the press from the side instead of above the platens. 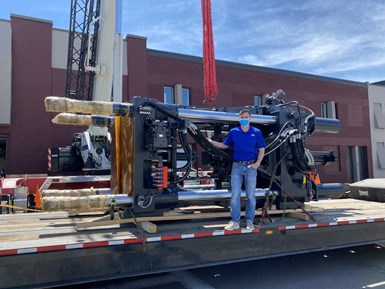 Brett Pennefeather, Eck’s president, said in a release that his company ordered the MA II S with a push-button-operated automatic tie bar puller positioned on the preferred side of the machine. “The lead time on this customized option was shorter from Absolute Haitian than from competitors and other competitors’ tie bar pullers were not automatic,” Pennefeather said in a release.

To support the new, large press, a reinforced concrete floor had to be poured and new electrical and plumbing services were installed. The riggers, Rogers Service Group, had to navigate several tight sections within the plant as well as a narrow delivery dock, Pennefeather noted, adding the the machine’s clamp alone weighed roughly 50,000 pounds and was assembled outside and then rolled into the building.

The first product being made on the MA II S is a souvenir drinking cup shaped as a baseball bat and sold at major and minor league ballparks. “The delay in opening professional baseball ended up working in our favor as it took the fire drill out of starting up the machine,” Pennefeather said.

Eck’s Pennefeather ordered the Mars with an automatic tiebar puller so molds can be loaded from the machine’s side to accommodate a low ceiling.