System generates the low temperatures with compressed air cooled by liquid nitrogen, which flows over the sample.

Germany’s Fraunhofer LBF, Darmstadt, says it has developed a unit for high-speed testing of materials at temperatures as low as -40 C by eliminating the need for a separate cooling section.

The organization said the system generates the low temperatures with compressed air cooled by liquid nitrogen, which flows over the sample. “A thermal camera monitors the temperature over a large area, and the team starts the measurement as soon as the desired temperature is reached.” 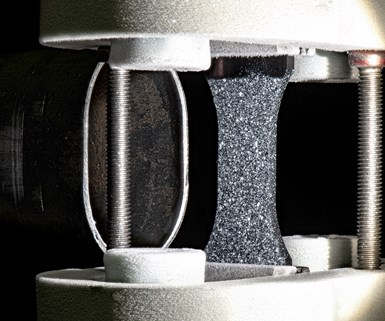 The researchers say the compressed air is dry, so only a few ice crystals form on the sample surface. In addition, the gas mixture from the cold reservoir reportedly ensures a more constant temperature of the air flow than when nitrogen is applied directly. The cooling device consists of a controller and switching element, a cold reservoir, a nitrogen tank and a supply line to the sample.

One benefit is clear, Fraunhofer said. “The omission of a thermal chamber offers the advantage that there is no pane between the camera and the sample, which could tarnish or freeze or form air vortices when the pane is heated.”

The unit can optically measure the strain with DIC/GSC (Digital Image Correlation/Greyscale Correlation), which allows researchers to determine a 2D strain field on the specimen, from which the longitudinal and transverse strains are derived, Fraunhofer explained.

“Preferably, the LBF team of scientists produces plates from the supplied granulate, from which they then mill various test specimens at any angle.”

After testing, researchers then create material cards from the data. For validation and investigation of morphological influences, a microcomputer tomograph is available to determine fiber orientations.

Fraunhofer LBF said its in-house testing can serve raw materials manufacturers and markets such as automotive, aerospace, and consumer goods.