GAP, a film-extrusion machine builder based in Italy, has recently installed a 27-layer microlayer blown film line in its R&D center in Trecate. The new line is comprised of 9 extruders and a 400-mm, annular coextrusion die capable of producing film in layflat widths to 1600 mm. The line is also equipped with an automatic air-cooling ring control and a new software control system.

To date, GAP (gapitaly.com) has tested several structures on the microlayer line, both with blocks and alternating layers, and is said to have generated film with good mechanical properties at overall film thickness of around 20-25% below than the industry standard.

GAP says it will soon test structures with multiple alternate zones. It notes that with microlayers, the thin layers of polymer are more easily oriented, allowing processors to run not only PE but also PP to increase the rigidity of the material and decrease pin holes. 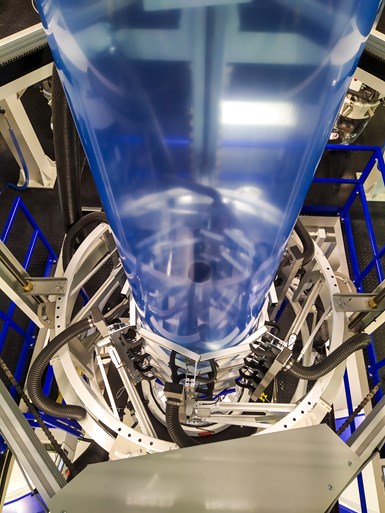 GAP has been in business since 2004, and also makes double-bubble and water-quench film lines, as well as lines for extrusion coating.

More details on the system will be reported in the August issue of Plastics Technology.