Molding parts every 18 to 28 seconds, filling a box every minute, and shipping an average three truckloads of product every day—Novation has risen to the coronavirus challenge.

When an existing safety products customer contracted with the U.S. Federal Government to provide an array of safety products to meet a nationwide spike in demand for healthcare, laboratory and industrial work environments, Novation Industries (McHenry, Ill.) stepped up with “unprecedented” production volumes for face protection products.

The increased order volume, which started in April and will continue at least through September, includes injection molding and complete product assembly and packaging of face protection products. A company spokesperson told Plastics Technology that the project is running on seven different all-electric Toyo injection molding machines, ranging in clamp force from 55 to 400 tons. In addition, the company deployed a 40-ton punch press for punching out the face shield from sheets of polycarbonate; a riveting machine for riveting the adjustment knob to the headband; and five assembly machines that were built in-house and are used to assemble the face shield to the headgear. 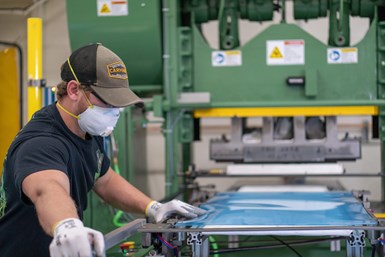 Novation uses a 40-ton punch press to “punch” out the face shield from polycarbonate sheet.

To package the shields, the company uses two Sharp Max 20 auto bagging and labeling machines for bagging the finished products, and one Marq HPE 415 Box Erector and Taper. All of this is required “to keep up with the demand of making boxes because we ship, on average, three truckloads of product every day, which means we are filling a box every minute,” according to the spokesperson.

On the tooling side, the project has included eight injection molds ranging from 2 to 8 cavities, molding parts every 18 to 28 seconds. Post molding, the company created degating fixtures for removing the runners from the parts, and a spectrophotometer for verifying the color consistency of the parts.

Scott Baxter, president of Novation, said around-the-clock operations were required to keep up with demand. “We had three shifts dedicated to producing products to fulfill these critical shipments,” Baxter said. “During the initial weeks of startup, all of our employees, including engineers, administrative staff and even the CEO could be found on the production floor ensuring that our shipments were on time.”

The project required Novation to triple its production labor pool, invest in new injection molding tools to allow concurrent production, and spend $120,000 on automation, including labeling and packaging equipment.

Novation said it will continue to produce PPE products beyond the September deadline to build out a future stock pile and ensure national supplies are available for both the healthcare and industrial segments in case of another unexpected crisis.

Novation is shipping, on average, three truckloads of product every day and a filling a box every minute.