Priority Plastics, a blow molder of stock and custom HDPE, PET and PVC containers, is expanding beyond extrusion blow into PET injection stretch-blow molding (ISBM). The company plans to install this month several machines that reportedly are the first in the U.S. to employ new single-stage ISBM technology that can produce PET containers from 1 gal handleware up to 25-gal drums. The machines will go into the headquarters plant in Portland, Ind. (The firm also has plants in Arizona, Iowa and Colorado.)

Super-wide-mouth PET containers are one capability of new ISBM technology being introduced to the U.S. by Priority Plastics.

Priority Plastics declined to name the overseas source of these machines, but states that they offer several advantages new to the U.S. PET market. For example, they can produce jugs with integral handles, similar to extrusion blown HDPE jugs, but without any trim scrap. 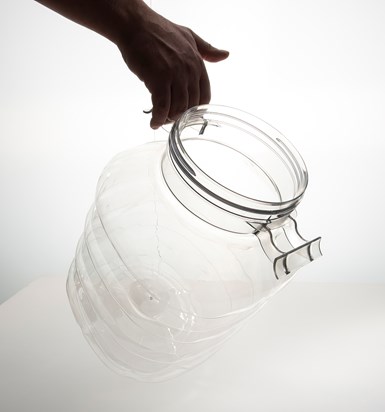 Another type of handle—injection molded as part of the neck finish—is also possible with new PET ISBM technology being installed by Priority Plastics.

Other capabilities reportedly include stackable bottles, rectangles, and wider necks than are available with competing ISBM technologies. Additional advantages are said to include quick changeovers and energy savings up to 40% by recapturing high-pressure blowing air for use in extrusion blow processes.