In 2013, a record 96% of scrapped tires from passenger and commercial vehicles in the U.S. were recycled into other products. This was a 14 percentage-point jump from 2011 levels. 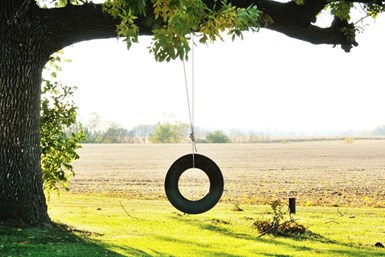 But the rate has plunged in subsequent years. Last year less than 76% of used tires were recycled, according to a report by the U.S. Tire Manufacturers Association (USTMA).

Part of the problem is there are a lot more tires produced and scrapped each year.

At the same time, the market for recycled tires in the U.S. has declined by about 8%. 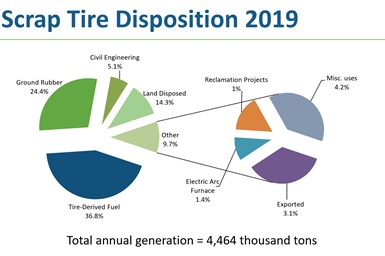 This includes a big drop-off (-22%) in tire-based fuel applications in electric utility and other industrial boilers, cement kilns and pulp and paper mills. Such demand is expected to continue to fade due to a combination of aging facilities, a move away from solid fuels, low prices for natural gas and climate considerations, notes John Sheerin, USTMA’s director of end of life tire programs and the author of the new report.

About 4% of ground rubber from scrapped tires is recycled back into car parts, including new tires, floormats, gaskets and brake parts.

But the overall volume of such recycled rubber parts has been halved since 2011. USTMA attributes the decline in part to a key processor exiting the market.

Separately, there has been great progress made in reducing the volume of stockpiled used tires, which was estimated at about 1 billion units in 1990. The number has steadily fallen over the last 30 years and stood at 56 million at the end of 2019, with most of the remaining concentrated in eight states.

Although some of the scrapped tire stockpile has been recycled over the years, a large amount—especially in the early years—has gone to landfills.

“Efforts to find and develop new uses for scrap tires have stalled. We must take immediate steps to grow new and existing markets to recycle 100% of scrap tires,” asserts Anne Forristall Luke, president and CEO of USTMA.

To this end, the group—which represents 13 tire manufacturers with 57 manufacturing facilities across the country that generate about $27 billion in annual sales—is working with state regulators, recyclers and other stakeholders to better manage scrap tires and develop recycle and reuse markets.

This includes ground rubber used in asphalt, which is one of the few applications that has grown in recent years, nearly tripling in the last seven years to 180,000 tons. Rubber-modified asphalt has a long life, Sheerin points out, and can be reused multiple times.

There also is a growing trend to use so-called recycled carbon black (rCB) and natural rubber in new tires. Bridgestone, Continental and Michelin already use some rCB in new tires.

Michelin also has a development partnership to increase end-of-life tire recycling through a pyrolysis process that converts scrap tires to new raw materials. And Goodyear has begun to use soybean oil-based rubber.

Sheerin also expects other automotive applications for recycled rubber to grow as part of the overall trend to use more sustainable materials throughout vehicles.

Tires remain one of the most recycled and reclaimed products—along with automotive batteries—in the U.S. But end-of-life markets are not keeping pace with increasing numbers of scrapped tires.

USTMA is calling for a concerted effort among its members, regulators, recyclers, researchers and environmental groups to reverse the trend and develop new applications.

The effort includes a more focused use of recycling fees on new tires. New York, for example, has one of the highest fees ($2.50 per tire), but only a small amount actually goes to recycling efforts, Sheerin notes.

Other recommendations include creating innovation challenges and increasing research funding to study the lifecycle impacts of scrap tires in different end-use markets.

The good news is that virtually all rubber—as well as a tire’s steel and fabric components—can be recycled. But, Sheerin says, the industry needs to redouble its efforts to find uses for the materials.